Scarecrow and the Army of Thieves (Scarecrow #4) 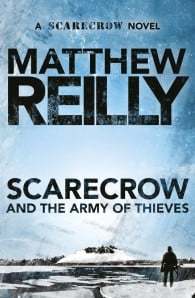 At an abandoned Soviet base in the Arctic, the battle to save the world has begun…The secret base.It is a top-secret base known only as Dragon Island. A long-forgotten relic of the Cold War, it houses a weapon of terrible destructive force, a weapon that has just been re-activated…A renegade army.When Dragon Island is seized by a brutal terrorist force calling itself the Army of Thieves, the fate of the world hangs in the balance, and there are no crack units close enough to get there in time to stop the Army setting off the weapon.One small team.Except, that is, for a small equipment-testing team up in the Arctic led by a Marine captain named Schofield, call-sign SCARECROW. It’s not a strike force; just a handful of Marines and civilians. It’s not equipped to attack a fortified island held by a vicious army. But Scarecrow will lead the team in anyway, because someone has to. “Some of the wildest and most sustained battles in an action thriller in a long time. . . . Nonstop action, lots of explosions—and a little bit of conspiracy.”  Chicago Tribune“Matthew Reilly novels should come with health warnings on the cover. . . . [T]he non-stop life-threatening action . . . is not for the faint-hearted. It’s a wild ride.”  The Daily Telegraph “Fans will love the adrenaline rush.”  Library Journal"If you're looking to have your posterior kicked and your name taken, this is the book for you."  Bookreporter"Propels Reilly to the front of the pack."  Publishers Weekly 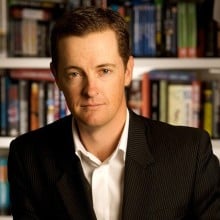 Matthew Reilly is the international bestselling of author of twelve novels: Contest, Ice Station, Temple, Area 7, Scarecrow, Hover Car Racer, Hell Island, Seven Ancient Wonders, The Six Sacred Stones, The Five Greatest Warriors, Scarecrow and the Army of Thieves and The Tournament. His thirteenth novel, The Great Zoo of China, is published for Christmas, 2014.Matthew’s books are published in over 20 languages and he has sold approximately 5 million books worldwide: 3 million in Australia; over a million in the US; and over a million in the UK.In 2011, Scarecrow and the Army of Thieves was the biggest selling fiction title released in Australia for that year. Three more of Matthew’s books have been the biggest-selling Australian fiction titles of their year of release: The Tournament (2013), Seven Ancient Wonders (2005), The Five Greatest Warriors (2009).Matthew has also written two novellas: in 2005, he wrote Hell Island for the Australian Government’s Books Alive project and in 2014 he released the epic fantasy-quest ebook Troll Mountain.Matthew has written several short stories, including Roger Ascham and the King’s Lost Girl, a special free prequel to The Tournament which is available online. Other short stories include Time Tours, The Mine and the hyper-adrenalised romp, Altitude Rush.Matthew was appointed to the Australian Government’s Public Lending Right and Educational Lending Right Committee in 2007. He served on that committee till the end of 2011. Matthew has done speeches at libraries across Australia and around the world, from Minlaton to Edinburgh, from Cape Town to Houston.He owns and drives a DeLorean DMC-12, the car made famous in the Back to the Future movies. He also has a life-sized Han Solo in carbonite hanging on the wall of his office! 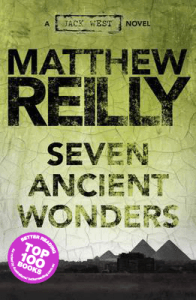