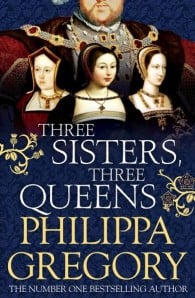 Why we love it: Philippa Gregory encapsulates the strength, beauty and determination behind the women in the Tudor Court in a mesmerising historical fiction that takes you on an emotional rollercoaster.It is 1501 - Katherine of Aragon is brought to the Tudor court as a young bride. Margaret, a Tudor princess with the pride of a king, immediately measures her up. With one look, each girl knows the other for a rival, an ally and a pawn. Caught in the crossfire is Mary, Margaret’s youngest sister, who grows to love Katherine as her own blood. They will become the queens of England, Scotland and France, who, united by family loyalties and affections, find themselves set against each other. As sisters, they share an everlasting bond. As queens, they break each other’s hearts.Separated by their duty, the sisters correspond with each other through letters, allowing us to learn of the triumphs and failures each woman encounters. Soon Katherine and Margaret find their countries at war, leading to Katherine killing Margaret’s husband and leaving her power on the cusp of ruin. The only small hope Margaret has is Katherine’s inability to produce an heir. To keep her son’s position as successor, Margaret organises to marry the King of France but is soon betrayed as Mary steals her proposed husband…Three Sisters, Three Queens, keeps tensions high as we watch the political and emotional battle to main power and status. Philippa Gregory shows the real struggles these women faced in an era of betrayal, war, love and rivalry. Exceptionally written, the book allows us to feel disgusted with each sister in their treatment for one another while also playing with our sympathies. Despite being biased from Margaret’s perspective, we feel deeply for Katherine as she loses her husband to Anne Boleyn and Mary whose innocence resonates in comparison to Katherine and Margaret’s bitter rivalry.Three Sisters, Three Queens is a thrilling new Tudor Court book you will not be able to put it down once you fall in love with these three women.[embed]http://www.youtube.com/watch?v=0yDATPI524g[/embed] Philippa Gregory was an established historian and writer when she discovered her interest in the Tudor period and wrote the internationally bestselling novel The Other Boleyn Girl. Now she is looking at the family that preceded the Tudors: the magnificent Plantaganets, a family of complex rivalries, loves, and hatreds.Her other great interest is the charity that she founded nearly twenty years ago: Gardens for The Gambia. She has raised funds and paid for 140 wells for the primary schools of this poor African country.A former student of Sussex university, and a PhD and Alumna of the Year 2009 of Edinburgh University, her love for history and commitment to historical accuracy are the hallmarks of her writing.She lives with her family on a small farm in Yorkshire.