This year’s Top 100 list is incredibly diverse, showcasing an eclectic mix of classic books and modern fiction. It also cements a recent trend in publishing over the past few years… the rise of the debut novel.

Once upon a time in Australian publishing, to make it as a writer you had to already have a profile. Writers had to work hard to establish a following, often having to publish five or so novels before reaping any rewards or gaining any acknowledgment. Books were very much judged by the name of the person behind the pen, but this isn’t so much the case today.

Previously unheard of authors can now emerge from seemingly nowhere to produce amazing pieces of writing – and we, the readers, are absolutely lapping it up.

We’ve had The Ruin by Dervla McTiernan, The Nowhere Child by Christian White, Boy Swallows Universe by Trent Dalton, The Lace Weaver by Lauren Chater, and Scrublands by Chris Hammer, all of which have taken Australian readers by storm and made the Better Reading Top 100 list.

What has prompted this trend? The willingness of publishers to take on new and potentially risky titles in the past few years has certainly contributed. We’re seeing more of that each year. A book however, is only as successful as its readership deems it to be – and readers have certainly helped to carry the success of these debuts. It seems that avid readers are judging books more on the merit of their story and writing, as opposed to the writer’s reputation or national profile. Whilst writers are boldly branching out and trying new things, readers are taking risks as well by experimenting with new genres and forms that they previously would never have read.

Here are some of the debut titles that made the Better Reading Top 100 List. if you haven’t read them yet, take our word for it – you’ll want to add these to your reading pile ASAP. 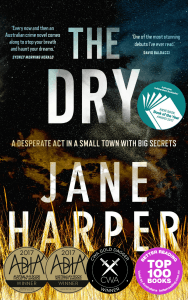