In the beginning, there was Jeff Kinney:  #1 USA Today, New York Times and Wall Street Journal bestselling author and a six-time Nickelodeon Kids Choice Award winner for Favourite Book. Jeff is a seriously funny guy and a very talented illustrator. (Interesting side note: Jeff and his wife own a bookstore, An Unlikely Story.)

Jeff created a character named Greg Heffley who is also known as Wimpy Kid. Jeff’s first book, Diary of a Wimpy Kid, hit the bookshops in 2007 and was a global sensation, with 14 books in the series so far and another one in the pipeline. Readers aged 8 to 12 years just cannot get enough of Jeff Kinney’s imaginative writing and drawing.

In Rowley Jefferson’s Awesome Friendly Adventure Rowley decides to write a book just for himself, about a character named Roland. Roland is a very good boy who tries to please his parents by practising his flute and staying indoors at night to be safe. Roland practices kindness and is a considerate child. Rowley shows his mum the first chapter and she is very encouraging.

Rowley also shows the first chapter to Greg Heffley, who gives Rowley some advice about how to increase the believability of the tale and how to improve the story to ensure they can secure a movie contract, guarantee strong merchandise sales and make a lot of money. Although Rowley is unsure about this direction and these ideas, he agrees that Greg can handle all the business deals and he will concentrate on writing the book.

As Rowley shows each chapter to Greg, Greg tries to steer the storyline and character development in a direction he thinks will make Rowley’s writing more successful and commercially appealing. For example, he advises Rowley that “no-one would read a book about a boy wizard”.

There is a lot of humour in the book that will appeal to the adult reader and there were definitely outbursts of laughter and knowing smiles for this reader. I even started to wonder if Jeff Kinney might have been poking fun at editors and publishers who may have tried to shape Jeff’s creativity at some stage of his career.

The story is a fun and shambolic romp through the formulaic “quest” of fantasy stories, with numerous references to well-known fantasy stories. For example, Roland can pull a sword from a stone and the sword has magical properties. Throughout the story, there is just enough magic and lucky circumstances in the nick of time to keep our hapless hero Roland safe and on the right path.

Following Greg’s advice, Rowley adds a romance, several characters and a few plots twists. Just when you are wondering how in the world Rowley will be able to pull all the threads of the story together for a happy conclusion he stops listening to Greg and writes a perfect Hollywood ending. Ta-da!

If you think that perhaps I have given away a lot of the plot, then you are seriously underestimating Rowley Jefferson (and Jeff Kinney). This is a fantastic story within a story, and the illustrations are hilarious. Highly recommended for readers 8+, including reluctant readers, parents, grandparents, teachers, and librarians. 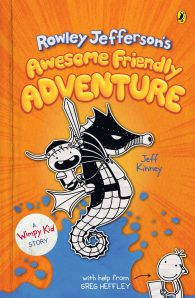 Beloved characters Rowley Jefferson and Greg Heffley are reimagined in an epic quest by internationally bestselling author of the Diary of a Wimpy Kid series, Jeff Kinney.Adventure awaits! From the imagination of Rowley Jefferson comes an adventure of epic proportions. Join Roland and his best friend, Garg the Barbarian, as they leave the safety of their village and embark on a quest to save Roland’s mom from the White Warlock. Will our heroes survive? Find out in Rowley Jefferson’s Awesome Friendly Adventure!