Book of the Week: A Most Magical Girl by Karen Foxlee Karen Foxlee’s A Most Magical Girl will sweep you away to Victorian-era London, and settle you in a world where visions come in puddles, brooms need to be treated politely, and little girls are capable of being very brave indeed.

We meet young Annabel Grey as she is being dumped somewhat unceremoniously at the doorstep of two aunts she’s never met. Bewildered by this very sudden change, Annabel is missing her mother and the life she knew, at Miss Finch’s Academy for Young Ladies.

Her aunts own a magic shop, and before long Annabel realises she has entered a very different world to what she left behind. While we see Annabel desperately trying to make sense of her new life, we also meet the evil Mr Angel, who has created a dark magic machine that feeds off sadness.

Mr Angel and the shadowy monsters he creates are planning to crush white magic once and for all, and Annabel might just be good magic’s last hope. However new she is, the prophecy states that as the youngest witch in the family, it all comes down to her – a most magical girl.

When we meet Annabel, it’s easy to warm to her nervousness and vulnerability. She is new to this world of magic, after having spent years being told by her mother to suppress her powers (such as seeing visions of the future in puddles). Who she thought she was no longer fits, and Annabel struggles to find herself again.

An important scene comes when Annabel is being taught by her rather gruff Aunt Henrietta to clear her mind, to think of it as a teacup and delve down into the thoughts swirling in the cup. As Annabel does this, she realises she is not the girl with neatly curled ringlets, as fancy and perfect as the teacup she imagines her mind to be: ‘bone china, white, painted all over with yellow roses and trimmed with gold’. The truth is, Annabel Grey’s cup, and mind, are dark, confusing, and scared. At that precise second, she sees that ‘her world was shattering around her. Everything seemed lost and found at exactly the same time.’ It’s a powerful moment, and shapes Annabel and the story for what is to come.

Although she is supposedly ‘the most magical girl,’ Annabel is never alone on her journey. Early on she meets Kitty, who seems sullen and silent but in reality is always listening – to the trees, the fog, and the fairies of Highgate. What’s especially lovely about this book is how it presents family and friendship. As a Vine Witch, Annabel is part of a magical sisterhood, and it’s always enjoyable to see the world being saved by a group of no-nonsense ladies. Her aunts, in their own ways, share their wisdom with Annabel, and she even learns things about her now absent mother that she had never known.

Good magic in their world comes from kindness, from community. Annabel needs to believe in herself, but also in the strength of others. Despite their differences, she learns to support and work with Kitty, to form a powerful team. Author Karen Foxlee says “kindness, resilience and friendship” are all important themes in A Most Magical Girl, but that “the most important part of the story for me is Annabel Grey finding out about herself… She goes on such an incredible journey and in the end she is true to herself rather than true to what is considered the norm which I think is an important message.” You can read more from our interview with Karen here.

While Mr Angel is certainly menacing and his shadowling creatures will send a shiver up your spine, this is not a book that aims to scare readers, and will be a great fit for young lovers of magic and fantasy, ages 9-12.

A Most Magical Girl sparkles (even beyond the shiny cover), and is the sort of book, and world, that readers will find themselves completely engrossed in, with characters that have a lot of heart. At its core,  A Most Magical Girl has a simple but magical message: ‘Be brave. Be good.’

Click here to read our interview with Karen Foxlee, or here to purchase a copy! 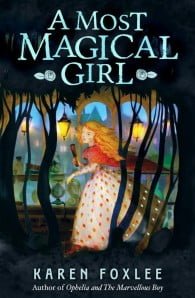 Annabel Grey has been brought up to be a very proper Victorian young lady. But being 'proper' isn't always easy - especially when you can sometimes see marvellous (as well as terrifying) things in puddles. But parlour tricks such as these are nothing compared to the world that Annabel is about to enter...After the rather sudden departure of her mother, Annabel is sent to live with her aunts. They claim to be Shoreditch witches, and from a very old family line of them too. They're keen to introduce Annabel to their world of transformation, potions and flying broomsticks (which seem to have strong personalities of their own) but are horrified when Annabel announces not only does she not know any magic, young ladies shouldn't believe in such things. But before Annabel has time to decide whether she does or not, she is swept into an urgent quest.The trees of Highgate have been whispering to Kitty - an extraordinary urchin of a girl, who Annabel's aunts seem very fond of - and so have the fairies. They talk of a terrible, dark magic that wants to devour all of London. And of a most magical girl who might be able to stop it...This sparkling and enchanting story is sure to bewitch you, so curl up in front of the fire, and prepare to be swept away...