Caleb Krisp on His Character, Ivy Pocket, and the Value of Books and Reading Books ‘are a refuge and a wonderland…they thrill and comfort…break hearts and kindle hope.’

Caleb Krisp (not his real name) is an Australian author and the creator of unstoppable – and hilarious – heroine, Ivy Pocket.

His first Ivy book has been translated into 23 languages and rights have also been sold to Paramount Studios, to make into a live-action film!

Kirkus Reviews describes Ivy Pocket as a mix of Amelia Bedelia and Dr. Who.

Australia’s Kids’ Book Review says ‘Krisp’s writing style is gloriously gothic and will be a hit with fans of Lemony Snicket.’

And Melbourne bookshop The Little Bookroom highly recommends the book: ‘8-12 year olds and anyone with a sense of whimsical fun are sure to enjoy this fast-paced and tongue-in-cheek novel, the first in a series.’

Read our free Anyone but Ivy Pocket Krisp extract or find out more about the book.

Krisp is also a very funny man. We tried to keep a straight face as we asked him about the inspiration behind Ivy:

BRK: Please tell us a little about your character, Ivy Pocket.

CK: Ivy is a twelve year old lady’s maid of no importance. She’s also horribly self-important, frequently delusional, violently loose with the truth, magnificently rude, thick as a chocolate pudding and possibly the worst maid who ever graced a children’s book.

BRK: Were Ivy or any of the other characters in the book inspired by real people?

CK: I’m certain that there are elements of real people in my characters – after all, I know some ghastly people. But if I were to ascribe the inspiration for Ivy to anyone I personally know, I’m quite certain they would lock me in stocks and beat me with egg whisks (or at very least, staple me to a cork board and read Star Trek fan fiction until my eardrums voluntarily self-perforated).

BRK: You must have had a lot of fun dreaming up some of the scenes in this book. Do you have a favourite scene?

CK: It was tremendous fun. As your question clearly implies, I’m a magnificent sort of writer, so I find it extremely difficult to chose a favourite scene – for there are so many astounding literary moments. However, for the purposes of being cooperative and congenial, I would say my favourite moment was probably when Ivy drops from a great height into a birthday cake and splatters a hall full of aristocrats with cream and icing.

BRK: Were there also challenges in writing the book?

CK: A great many. I tend a herd of vaguely agoraphobic alpacas and they were ruthlessly demanding during the years I spent writing Anyone But Ivy Pocket – which I put down to professional jealously and whatnot. The other great challenge was writing a first person narrative that kept the reader several steps ahead of the narrator. Which is tricky to do, but wonderfully good fun.

BRK: Tell us a little about how you worked with illustrator John Kelly on the book. Did any of the elements in his illustrations surprise you?

CK: I seem to recall that John came to the project quite late in the piece. My dealings with him were of the indirect kind – I try and keep all my dealings with people as indirect as possible (carrier pigeon is my preferred method). But from the very first rough sketches that I was sent, it was clear that John’s illustrations were imbued with humour and whimsy. He works quickly and responded to any and all concerns in record time. It’s always fascinating to see a visual representation of your characters through the eyes of an illustrator. I worked with a different illustrator for the US edition and I found her work equally dazzling.

BRK: What do you hope kids get out of reading Anyone but Ivy Pocket?

CK: My hope is that they are both amused and slightly appalled by Ivy’s behaviour. If they are compelled to keep turning the page, I would be hugely thrilled. If they recognise that Ivy is a girl at the very bottom of the social pecking order in 19th century England – a nobody of dubious lineage all alone in a harsh world, who simply refuses to accept her station or concede that she is anything less than wonderful, brave, clever and beloved, then all the better.

BRK: In your Acknowledgments in the back of the book, you say that books ‘are a refuge and a wonderland…they thrill and comfort…break hearts and kindle hope.’ What books were significant to you when you were a child?

CK: I read everything I could get my hands on as a child and whole worlds were built in the wonderland of my imagination thanks to each and every story. Those characters and places still reside there and they happily coexist with the characters and worlds of my own books. If I were to nominate a favourite childhood book it would be the one concerning four children, a country house and a wardrobe. It featured a majestic talking lion and a large quantity of turkish delight. I spend many happy hours lost inside its pages – and I still venture there from time to time.

BRK: Where do you write?

CK: I spend most days writing in a locked box. It’s windowless, confined and deeply uncomfortable – but the light from my laptop illuminates the interior beautifully and there is nothing there to distract me, apart from a stuffed rabbit and a hat box.

BRK: What are you working on next?

CK: I just finished book two in the Ivy Pocket trilogy and am about to plot out the final volume in Ivy’s great adventure. I am excited that the finish line is somewhere on the horizon and also rather sad that my time with my wonderfully exasperating heroine is coming to an end.

BRK: We hear you have some connections to Australia. Can you reveal more about these?

CK: I’m afraid not. My reluctance stems from both the impertinence of your question and my poor sense of geography.

Find out more about Anyone But Ivy Pocket or purchase a copy here.

If you like this story, please consider sharing it using the social buttons. And to keep in touch with all our stories, follow Better Reading Kids on facebook. 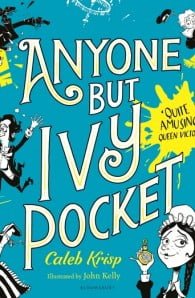 Ivy Pocket is a twelve-year-old maid with all the natural instincts of a wartime Prime Minister. Or at the very least, a lighthouse keeper. For the princely sum of 500 pounds, Ivy has agreed to courier the Duchess of Trinity's most precious possession - the Clock Diamond - from Paris to England, and to put it around the neck of the revolting Matilda Butterfield on her twelfth birthday.Acquiring bosom friends and instant enemies as she goes, it's not long before Ivy finds herself at the heart of a conspiracy involving mischief, mayhem and murder.Illustrated in humorous gothic detail by John Kelly, Anyone But Ivy Pocket is just the beginning of one girl's deadly comic journey to discover who she really is. 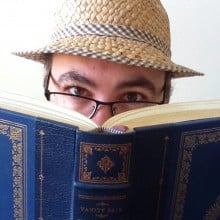 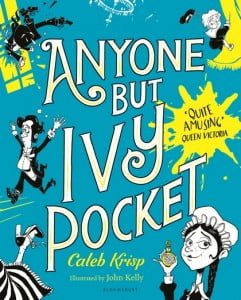 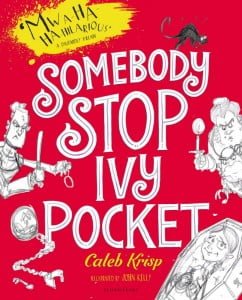