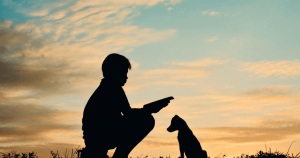 Booklovers are quite often pet lovers – there is a natural connection between the two. And if you don’t agree with that, you clearly don’t have a pet. There’s nothing more wonderful than curling up with your pet, a book in one hand and a pat with the other. While they might not read the book, they can read us, and with us. They can even be read to: there are programs and schemes to get children reading to animals. It not only builds literacy skills but is therapeutic. You can read more here.

Books can also influence what we name a pet. One of my Better Reading teammates had a dog called Miffy, while another has a dog called Pip, a nod to Great Expectations.

When I was a teen, about a century ago, I adopted a cat and gave her the name Pagan, much to the horror of my conservative neighbours. But the name wasn’t a proclamation of my religious leanings but rather a nod to a book I was obsessed with: Shirley Conran’s Lace.(Judge if you must, but even the Guardian called it a Feminist Bonkbuster.)

Pagan lived a long feline life to the age of 17, and I took great pleasure calling out her name across the backyard fences as I called her in for dinner, for voicing her name always brought back memories of one of my all-time favourite characters, Pagan Trelawney.

Then there are the great pets in literature, such as Toto from The Wizard of Oz, and Wilber from Charlotte’s Web. Who else had their heart shattered when Hedwig from Harry Potter died in book seven?

Better Reading’s very own dog lover Cheryl Akle has a beloved pup called John Brown, named after her favourite children’s book, John Brown, Rose and the Midnight Cat by Jenny Wagner & Ron Brooks. John Brown has taken four-legged literacy to a new level… and makes a cameo in Michael Robotham’s latest novel, Good Girl, Bad Girl. Check out page 339. The master of crime himself said he had to make sure nothing awful happened to John Brown.

Whether we feature them in novels, name them after characters from our favourite novels, or simply sit with a pet while we read a novel… there is no doubt that pets and literature are intrinsically connected.

Do you have a favourite fictional pet? Have you ever named a pet after a character from a novel? Tell us about it.