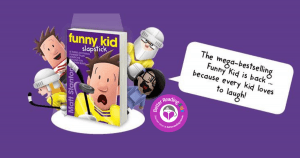 Fans of Funny Kid will be overjoyed to hear there is a new instalment in the best-selling series this month – and as you would expect, Funny Kid Slapstick is epic!

The star of the series is Max, the boy who can be guaranteed to get his classmates laughing – even in the face of adversity and in Funny Kid Slapstick there are some pretty grim moments.

If you haven’t come across Max before then take a look at the other titles in the series here. We reviewed the last one here and spoke to author Matt Stanton about why he writes for kids here.

The Funny Kid books are filled with hilarious illustrations that make them very appealing to 8 + readers. The series was written to entice reluctant readers, so you can be sure that Funny Kid books won’t be left languishing on the bookshelf.

There are a lot of laughs to be had – a pet duck who is always getting Max into trouble and a devoted best friend Hugo, who brings Max’s hair-raising ideas to life. If your little reader likes Wimpy Kid or Tom Gates, then this is for them.

Matt Stanton also has a great website here and – wait for it- his own YouTube channel where you’ll often find him doing crazy things like catapulting his book across a field or being shot out of a canon. He also demonstrates how to draw Max and the other characters that appear in the series.

Purchase a copy of Funny Kid: Slapstick by Matt Stanton 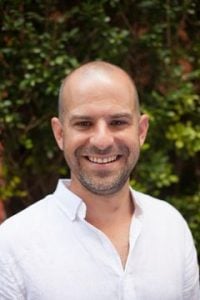 Matt Stanton is a bestselling children’s author and illustrator, with more than half a million books sold. He is the co-creator of several bestselling picture books, including the mega-hits There Is a Monster Under My Bed Who Farts and This Is a Ball. He launched his much-anticipated middle-grade series, Funny Kid, around the world in 2017. The first book in the series, Funny Kid for President, debuted as the #1 Australian kids’ book, and Funny Kid is fast winning legions of fans around the world. He lives in Sydney with his wife, bestselling picture book creator Beck Stanton, and their three young children. 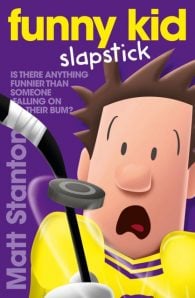 Every kid wants to laugh, but Max is the boy who can make it happen.Only now he's been forced to join the local ice-hockey team, and there's nothing funny about slipping over and getting a frozen bum. Or is there?Max is the funny kid ... and this time he's skating on thin ice!Epic fails, a wrestling rhinoceros called Roxanne, fake news, locker rooms filled with popcorn and the dreaded return of Mr Armstrong are just some of the things in store for Max and his friends in this brand-new Funny Kid adventure.