It’s a Dog Eat Dog World Out There 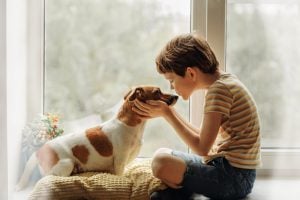 Who doesn’t love a story about our fluffy companions? While the kids are busy playing with the dog you can put on one of these dog themed audio books and celebrate just how wonderful dogs are!

Hairy Maclary and Friends by Lynley Dodd
Hairy Maclary may be a popular dog, but he also has a lot of popular friends. There’s Schnitzel von Krumm, Hercules Morse, Slinki Malinki and many more. And then there’s the terrifying Scarface Claw, the toughest tom in town who’s afraid of nothing ? or is he? This collection celebrates the 30th anniversary of the first book, Hairy Maclary from Donaldson’s Dairy, by bringing all of Hairy Maclary’s friends together.

Teacher’s Pet by Morris Gleitzman
Another hilarious and heart-warming story from Australia’s funniest children’s author.
What do you take to Pets Day at school when you’re allergic to cats and the new principal? A very large stray dog of course. Answering that question is much easier than the one she has to ask herself at home. Is she a pet, as Mum’s always saying, or a stray herself?

Dogstar by Philip Dalkin
The year is 2347. Every living thing has to move to a new planet. But along the way, the Dogstar – a space-ark filled with all the world’s canines – goes missing. The Clark kids set out on a brave quest to rescue their beloved pet, Hobart. But with an evil genius and a rock-throwing alien tribe pitted against them, will they ever find him?

TruckDogs by Graeme Base
A novel in four bites.
In a far-off desert world remarkably similar to outback Australia, evolution has taken an unexpected turn. The dominant life form is a creature covered in fur but with living steel panels beneath. It gnaws on bones and sniffs lamp posts but fills up on oil, brake fluid and petrol. And it’s wonderfully clever with its wheels and wing mirrors – able to do just about anything, in fact – which is lucky since it hasn’t got any arms or legs. It’s an animal with an engine. Or is it a car with floppy ears and a wet nose? This is the world of TruckDogs.

Red Dog: True Blue: by Louis de Bernières
When a family tragedy means Mick is sent to the outback to live with his Granpa, it looks as if he has a lonely life ahead of him. The cattle station is a tough place for a child, where nature is brutal and the men must work hard in the heat and dust. However, after a cyclone hits, things change for Mick. Exploring the floodwaters, he finds a lost puppy covered in mud and half-drowned. Mick and his dog immediately become inseparable as they take on the adventures offered by their unusual home, and the business of growing up, together. In this charming prequel to the much-loved Red Dog, Louis de Bernières tells the moving story of a young boy and his Granpa, and the charismatic and entertaining dog who so many fans hold close to their hearts.

The Rescued Puppy by Holly Webb
Twins Georgia and Adam can’t wait to go on their holiday to Cornwall – especially as it’s the first time they’re taking their new puppy, Lucky, with them. Lucky loves the seaside – chasing the waves, digging in the sand and the long cliff-top walks. One morning, unable to wait for Georgia and Adam, he sets off on his own. Unaware of the dangers, Lucky falls down a cliff and finds himself stranded, alone and hungry, and in need of rescue. Meanwhile, the search is on to find Lucky, but no-one seems to have seen the little dog. How will Georgia and Adam ever find Lucky?

The Lying Postman by Jack Russell: Dog Detective #4
There’s a new postman in Doggeroo – and he doesn’t know the rules of the Postman Game. Not only does he accuse Foxie of biting him, but he also calls Jack a mongrel! And when Fat Molly Cat from the Library comes to stay with Auntie Tidge, things don’t get any better. What did Jack find caught on the fence? Will it help him save the case of – The Lying Postman?

Werepuppy and The Werepuppy on Holiday by Jacqueline Wilson
‘He can’t help being a bit wild, Mum. He’s not like other dogs.’ A scary werewolf video leaves Micky terrified of dogs and Mum decides the only answer is to get Micky a puppy of his own. But when they go to the kennels to choose a puppy, Micky doesn’t pick the smallest, the cutest, or the quietest dog … but for some strange reason is drawn to Wolfie – who turns out to be a werepuppy! A whole host of adventures lie ahead … Wolfie turns out to be LOTS of fun and also lots of mischief! So when Micky’s family decide to go on holiday, Wolfie is banned from going. Micky is distraught. What fun is a holiday without Wolfie?