Ever felt like you were in a rut, so weighed down by the monotony of your daily life that you needed to change things – drastically? That about describes Frankie Rose when we first meet her at the start of The Book Ninja. 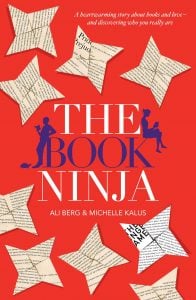 In fact, Frankie confesses straight up that if her life were a book she would call it Disappointment, ‘after the disaster that was her career, her family and, of course, her love life.’

The Book Ninja is a charming, off-beat story about love and books, and how Frankie shakes things up by embarking on the ultimate love experiment in the search for a relationship – or as the book blurb says, ‘just a date with a semi-normal person will do.’

Frankie, who works in a Brunswick bookshop belonging to her best friend, Cat, is a bookworm and a Jane Austen nut who’s read Emma so many times she knows exactly when the proposal scene’s coming and finds it difficult to decide between indulging in it instantly or hoarding it like a good chocolate to ‘savour later.’

Frankie’s bookshelves at home are filled with 172 of her all-time favourite titles. She’s a published author whose writing dreams have been soured by some nasty reviews. And she’s still nursing a broken heart after her last boyfriend dropped her.

In short, books are her life, lost love her sadness.

Frankie has been trawling Tinder for a well-read man with disastrous results and when Cat suggests she should use her favourite books to find a man, she sparks a light bulb moment. Frankie’s brainstorm is to leave some of her most beloved books on various trains and trams around Melbourne with a note inside inviting the reader to email her for a date.

Persuasion, The Goldfinch and Catch-22 are among the first titles that go out in Frankie’s strange social experiment. And it works. Kind of. People contact her and writing about the subsequent dates in a blog helps Frankie overcome her writer’s block. Each date is entertaining, if not exactly what she’d imagined.

And love does eventually come her way, although not with the kind of book-lover she would have chosen. And it does happen via a train trip. But not the way she’d planned. And things do not go smoothly.

It’s a delightful plot inhabited by characters who make mistakes and are easy to relate to. Romance and friendship, and an overwhelming obsession with books and literature, are all woven deeply into the fabric of The Book Ninja, with the road to happiness full of twists and potholes.

Frankie Rose is like the rest of us, well meaning, vulnerable, awkward (even daggy at times), and she doesn’t always eat healthily (ergo her love of pizza). Although spunky and full of fizz, she has crippling moments of self-doubt that make her want to retreat from the world.

The Melbourne setting is perfect – and well captured. Freezing cold, bookish, replete with lane-ways, bars and lots of people criss-crossing the city in trams and trains. There are endless nods to great books and writers (and their plots and quotes), which will have book-lovers in second heaven, with the friendship between Frankie and Cat the warm thread that pulls the story together.

Perhaps the only question that may be asked by some feminists is the relevance of a female character searching for The One in an age of strong, independent women. But there seems enough anecdotal evidence around to say that despite all our connectedness, people are lonely, and for those wanting an intimate relationship, Tinder or other dating apps is not the answer.

Besides, The Book Ninja is not a book for deep and serious analysis. It’s a clever, loveable book that is to be enjoyed. Maybe even hugged. 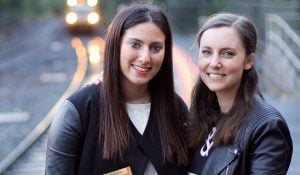 Ali and Michelle have been best friends for life and share a burning passion for books and writing. Together they began Books on the Rail in Melbourne and their network is now Australia-wide. Books on the rail is a community-based initiative to encourage people to put down their phones and read a book. Books are set loose on public transport and of course after they’ve been read, people are encouraged to release the book back into the wild to be enjoyed by other commuters.

Ali is Creative Director and Co-founder of Hedgehog Agency, Melbourne, and Michelle is a primary school teacher. 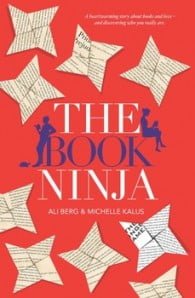 Frankie Rose is desperate for love. Or a relationship. Or just a date with a semi-normal person will do.It’s not that she hasn’t tried. She’s the queen of online dating. But enough is enough. Inspired by her job at The Little Brunswick Street Bookshop, Frankie decides to take fate into her own hands and embarks on the ultimate love experiment.Her plan? Plant her favourite books on trains inscribed with her contact details in a bid to lure the sophisticated, charming and well-read man of her dreams.Enter Sunny, and one spontaneous kiss later, Frankie begins to fall for him. But there’s just one problem – Frankie is strictly a classics kind of gal, and Sunny is really into Young Adult. Like really.A clever, funny and wryly observed story about books and discovering who you really are.