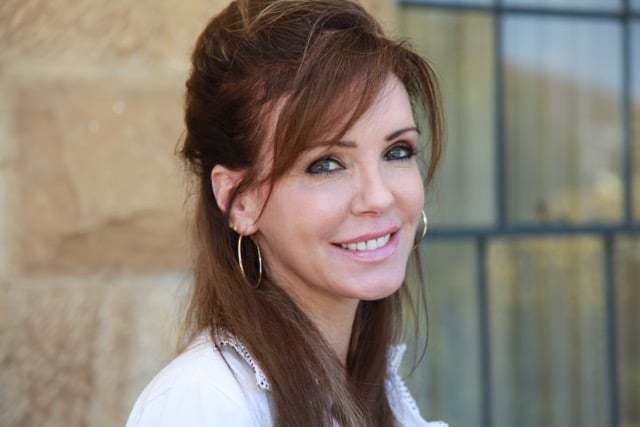 We love to escape into a gripping historical novel, and The Locksmith’s Daughter lures us into an Elizabethan England full of spies, secrets and seduction, where our heroine’s loyalty is tested and her heart is on the line.

Author Karen Brooks told us about the inspiration and research behind the book, authors she admires, and her unique fascination with locks and keys…

All your occupations seem to start with “A”: acting, army, academic and author. Is there a particular “A” job that you’d love to add to that list?

It’s funny how all my jobs ended up starting with “A” – it certainly wasn’t deliberate on my part. If I had to add one more, it would be Assistant Brewer at my partner’s brewery, Captain Bligh’s Ale and Cider in Hobart – a job I do love. But, if I could add anything to that list I wish I could do, providing it starts with A, it would have to be archaeologist. I’ve always been fascinated by archaeology and while I know it’s usually fairly mundane and that archaeologists are not all Indiana Jones (could you imagine!), there’s something about the painstaking unveiling of the past and deep understanding about how our ancestors lived by examining the traces they leave behind that’s so compelling and utterly fascinating. I think I could be happy with some dirt, a trowel, brushes, camera, buckets of knowledge and travelling to various historical sites – oh, and Indiana Jones for company.

What was your fascination with locks/locksmiths?

It seems strange, doesn’t it? I wasn’t always interested in them, even though I have a long and not very distinguished relationship with locks and keys. You see, I’m always misplacing or losing my keys. My son, Adam’s first words were actually “car keys”. When I expressed concern that he didn’t say “dada” or “mama” like other children, my friends laughed uproariously and asked if I was serious. When I appeared confused, they said you should hear yourself: “You’re always running around asking, ‘where are the car keys?’ ‘Has anyone seen my car keys?’ “I can’t find my car keys!’ No wonder Adam said those words first. He hears them more than any others…” True.

But, the idea for the book happened after I watched a locksmith, named Bruce, replacing the ignition barrel in our car after a key snapped in it. His tools, the way he worked and how he answered my questions had me hooked. Researching locks and keys, I became fascinated with the entire process. After all, locks were invented to keep people out of places – houses, rooms, cabinets, chests etc. Why? Not only so precious material objects could be kept secure; but to keep certain things away from prying eyes and to protect secrets – even if that secret was the accumulation of fortune, love letters, betrayals, treason and so on. Locks are a fantastic metaphor for secrets, whether they’re of a personal nature or political. During and prior to Elizabethan times, locks were not only ornate and quite beautiful works of art they were often deadly, being infused with poison, darts, dyes, sharp metal that could sever fingers and worse. As the person tasked with designing locks and the keys that opened them, locksmith’s played a very important role, particularly the more secrets a government or individual had to keep; the more possessions they wanted to secure. Spies, secrets, locks and locksmiths seemed to go hand in glove – especially with Tudor times and the birth of modern day espionage.

What was your inspiration for Nathaniel?

Ah… Nathaniel, he’s a contrary, wonderful, misunderstood bloke. Like many of my characters, he’s an amalgam of good men I know, naughty men too, who is then sprinkled with a bit of perfection dust. I also imagined him too look a little like the actor, Chris Hemsworth, in terms of size and movement. It wasn’t hard to project the notion of the good, clever and provocative buccaneer when I had such a clear physical idea of the man.

How much research went into The Locksmith’s Daughter?

A great deal in that I immersed myself in the period for at least a year and kept researching while I was writing (I do love the research!) for another year and more. I read numerous non-fiction books by marvellous academics, journalists and historians, spoke to locksmiths and experts on keys and locks here in Australia and the USA. I travelled to England and walked the streets and places I wrote about, went to the Tower, into dungeons, walked up and down Seething Lane and various other alleys and snickets. Went to see some productions of Shakespeare’s plays, toured The Globe and so much more. Inhaled the period as best I could. Went to Elizabeth I’s various palaces, explored Hampton Court, rode upon the Thames, and went to Deptford as well. I also read some wonderful fiction set in the period and watched films and TV documentaries. I found the entire era just mesmerising. It was difficult to tear myself away from!

Who are the Australian and international authors you most admire?

Gosh, I admire so many. I just read Melina Marchetta’s latest and, like all her work, it just filled me with admiration and wonder. I love Lian Moriarty’s books; Michael Robotham’s fabulous, suspenseful books I devour, Katherine Howell’s works, Candice Fox and so many more (we have some stellar crime writers here, we really do). I think Kate Forsyth is astounding and long for her next book to be published. Kim Wilkins is an amazing writer whether she writes under her own name or as Kimberley Freeman. Shirley Hazzard and Geraldine Brooks are also sublime. I also love Garth Nix, Juliet Marillier and Sara Douglass. In terms of international writers, I will try to be brief(ish) but, in no particular order: Margaret Atwood, Johan Theorin, Elizabeth George, Jo Nesbo, Kaleed Hosseini, Sharon Kay Penman, Anya Seyton, J.K Rowling (and as Robert Galbraith); Elizabeth Gilbert’s The Signature of All Things is a simply magnificent book. I am also partial to Edward Marston, adore C.J. Sansom’s work, Ken Follett, Ian Mortimer, Philippa Gregory, Peter Robinson, Peter May’s Lewis books, S.J. Parris, Hugh Howey, Liza Picard, Ian Mortimer and Robin Hobb … gosh, I am finding it hard to stop. So many great writers and books and so little time.

What do you hope readers take away from this book?

I hope readers take away a sense of pleasure, of having invested in something really worthwhile that lingers in their hearts and minds for ages afterwards. Also, I would love them to feel a sense of history, but particularly, the humanity that links us across the eons – how, for all our differences and so-called advances we are more alike than not – we still love, laugh, make silly and great decisions and gestures, suffer, long, grieve and triumph. I really hope my readers enjoy the book.

What is your attraction to historical romance?

I love giving voice to the past through strong but, hopefully, realistic characters and allowing them to speak to us in the here and now. Historical fiction becomes the means of inviting readers to go on a journey back into time with my characters, no matter how dangerous and wonderful. The romance element adds a particular and delicious frisson that I hope they relate to and love as much as I do writing it. “Romance” is a broad church: it’s not just about people falling in love, it’s about taking risks of the heart, that most precious and fragile of organs. It’s about emotional investment, not just between the characters, but from the readers as well. When a reader does that, gives you his or her heart, loses it to your characters and the story, there’s nothing better.

What’s next for you?

I am currently writing a book set in the early years of Charles II’s restoration, 1660s England. It’s called The Chocolate Maker’s Wife and is about a young woman who comes to London just as Chocolate Houses are being opened. They were select establishments where the wealthier citizens could imbibe the new beverage, the deliciously sinful “West Indian” drink called “chocolate”, and places where gossip, gambling and sexual misconduct thrived. The 1660s was a period when everything was changing and the British Empire was expanding; it was also the post-Puritan era, so a great many of the restrictions upon social and public behaviour were either lifted or being challenged. Chocolate drinking as a rich person’s popular past-time also coincided with the rise of slavery, journalism, women entering theatre, war, and huge religious and political upheavals and tensions. I thought the Elizabethan era fascinating, but the Restoration is a revelation – never mind all the dark and sinister secrets around chocolate!

Click here to purchase a copy of The Locksmith’s Daughter! 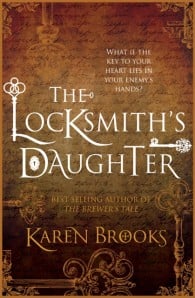 Mallory Bright is the only daughter of London’s master locksmith. For her there is no lock too elaborate, no secret too well kept. Sir Francis Walsingham, spymaster and protector of Queen Elizabeth – the last of the Tudor monarchs – and her realm, is quick to realise Mallory’s talent and draws her into his world of intrigue, danger and deception. With her by his side, no scheme in England or abroad is safe from discovery; no plot secure.But Mallory’s loyalty wavers when she witnesses the execution of three Jesuit priests, a punishment that doesn’t fit their crime. When Mallory discovers the identity of a Catholic spy and a conspiracy that threatens the kingdom, she has to make a choice – between her country and her heart.Mallory, however, carries her own dark secrets and is about to learn those being kept from her – secrets that could destroy those she loves.Once Sir Francis’s greatest asset, Mallory is fast becoming his worst threat … and everyone knows there’s only one way Sir Francis deals with those. [embed]https://www.youtube.com/watch?v=qDke-4Kg75c[/embed]