Jackie French AM, Australian author, historian, ecologist, 2014-2015 Australian Children’ Laureate and 2015 Senior Australian of the Year, shares with us her favourite childhood reads.

Books mattered when I was a kid. My life varied from boredom to terror. But I always had books …

The following ‘favourites’ are more or less in chronological order.

Bobs – author and possibly correct title unknown but it began, ‘“Seven o’clock. Time to get up,” said Bobs. Bobs jumped out of bed.’

Bobs was a cat, taunted by a mouse. They ended up friends and I adored them both.

The House at Pooh Corner by AA Milne
I still live partly with Pooh and Piglet and Trespassers W. From age 3 onwards the books I’ve loved have never really left me. (I may remember loving Bobs, but don’t think he changed my life much. But when I loved Bobs I lived with Great-Grandma, and life was safe and fun and fascinating. Maybe I didn’t need Bobs as badly as I needed a Hundred Acre Wood.)

The Famous Five in any of their adventures, and The Secret Seven and the ‘Four’ who faced Nazi agents. In fact, any of Enid Blyton except Noddy, who I thought was an idiot. Ambivalent about Big Ears.

The Magic Pudding by Norman Lindsay
This book corrupted me. I decided I wanted to live in a house in a tree in a market garden with all the fruit and veg and pudding I wanted to eat, lots of animals and good conversation in the evening. I clutched to that ambition and achieved it by the time I was 18 – and still live that life now.

Brave New World by Aldous Huxley
No one censored my reading, or even noticed. Nor did I notice the sex until I read the book again as an adult. But the concept of another kind of society was tantalising.

The Great Dialogues of Plato and The Death of Socrates
Socrates taught me to question my elders, pursue excellence, examine life, and that a friend and mentor would live as long as their books were read.

Hawaii by James Michener
A mistake, this one. At 7 years of age, I assumed it was non-fiction and was terrified that any mountain would explode into magma for years. I am still wary of possible tsunamis every time I go to the beach.

Pastures of the Blue Crane by Hesba Fay Brinsmead
The love of this book is with me too. It also helped me survive a few years later when I had little adult support. The Famous Five books probably helped too. No Mum or Dad or home? No worries. I didn’t even have villains to track down, although a few of their hard-boiled eggs and tomatoes and bottles of ginger pop would have been useful.

The Rocks of Honey by Patricia Wrightson

Emily of New Moon and the sequels by LM Montgomery. ‘Sister Emily’ who wanted to be a writer too, when everyone but a drunken teacher discouraged her …

Annette of River Bend by Irene Cheyne
Beautiful books. They taught me too that life needs beauty – and a fulfilled life need not be conventional. Survival tools, both of them.

Plus all I could find of Judith Wright, Kath Walker (now known as Oodgeroo of the Noonuccal, but ‘Auntie Kath’ back then), Henry Lawson, AB Paterson, Matthew Arnold, Tennyson, the plays of JM Barrie, and every collection of poetry I could find.

Jane Eyre by Charlotte Bronte
‘I care for myself,’ thinks Jane with complete integrity when the man she loves tempts her to adultery or bigamy. Plus he is the most romantic hero in literature.

And after that, with no library where I could borrow books ‘suitable for my age group’, I read adult books, sneakily borrowing them from adult bookshelves and returning them as quietly. Many were rubbish – and I knew they were rubbish – but I would have read the phone book (and did). There was no systematic reading. I read a book a day, at least – and still do. So I read what I could, until my Year 11 English teacher began giving me armloads of books each Monday.

Public libraries would not let young people access philosophy or even physics, much less all the other books by Huxley I wanted to read. But I could sneak between the shelves, and sometimes the nice librarians pretended not to see me.

More than half a century later, I remember every one of them with joy. 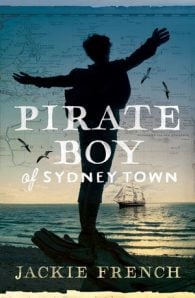 Twelve-year-old Ben Huntsmore is the son of a ship-owner, an only child who loves the farming life on his family's estate, Badger's Hill.But when Ben's father loses their ancestral home to pay a gambling debt, Ben reluctantly joins his father in a desperate venture to win back their home, capturing enemy trading ships off the west Australian coast.While at sea, Ben must face not just the giant waves of the Southern Ocean but also Dutch guns, as well as unexpected treachery as he realises that his almost-unknown father will sacrifice even his son to make his fortune.Only the unexpected friendships of the mysterious convict Higgins and young Indigenous sailor Guwara will help Ben survive, as well as show him the true meaning of loyalty and riches.From one of Australia's most-renowned children's authors comes a book filled with swashbuckling adventures that uncovers Australian's hidden history as a pirate port and slavers' den.