Imaginary worlds and secret magic: A peek behind the story with L.D. Lapinski, author of The Strangeworlds Travel Agency The Strangeworlds Travel Agency is about the adventures of a twelve year old girl named Flick, who discovers a rather grotty, abandoned-looking travel agency in the village she has just moved to. Inside the travel agency, as well as the sarcastic and rude owner Jonathan, are dozens of different suitcases. And Flick soon discovers that the suitcases are magical – when you step inside one, you are transported to another world!

I’d never given much thought to creating a portal-fantasy style book, even though it’s a genre that I really love reading, before The Strangeworlds Travel Agency. It was one of those bolt-from-the-blue ideas that came out of nowhere, and I had to write it right then and there. I’d never even written any middle-grade before, even though I enjoy reading it. The whole concept of Strangeworlds, and what the travel agency itself looked like, came to me in a flash, so much so that I wrote the first ten thousand words of it on the first day! The rest, not quite so fast.

There wasn’t really a great deal of research involved in the writing of The Strangeworlds Travel Agency, since almost all the worlds are imaginary. I had to do some maths to work out how time was travelling in the different worlds, though, and that is not my strong suit!

What are you hoping young readers will take away from reading your book?

An escape, even if it’s only for a little while. With the world like it is right now, I’ve been escaping into other worlds through books, TV, and video games as much as I can. If my book helps children and young people escape into another world for a while, that would be wonderful.

What were the children’s books that made an impact on you when you were growing up?

I was a massive reader as a kid, as I know most authors are, and I used to get in trouble for reading when I was supposed to be sleeping. I loved His Dark Materials and Artemis Fowl because they had the whole other-worlds-alongside-ours vibe that I still adore reading, and I enjoyed even slightly more twee stories like Enid Blyton because they were fun to read quickly and were full of magic and escapism.

I’ve always written, right from being able to pick up a pencil. I used to write little books and out them together at the table, and I always wanted to be an author. I studied creative writing at university, and got my agent after graduating from my Masters, but it took me a while to write Strangeworlds after that!

AMAZING. I had been glued to the front windows watching for the postie for days after I knew it had been printed. It is the biggest dream come true for me, and I feel so privileged and fortunate that it’s been able to happen for me. And yeah, I cried like a baby as soon as I unpacked the box!

Probably keeping track of all the different strands of the plot. The Strangeworlds Travel Agency is a series, so the story doesn’t end with the first book. I think of the Strangeworlds series as one huge book that’s been cut into various chunks – that helps me to keep track of the bigger bits of the story. The individual books are the most difficult to keep in line for me, personally. Each book has to drive both its own plot forward, and carry the larger plot as well.

Always, other people’s art. Be that paintings, tv shows, video games, books, poetry – I think you can squeeze more art out of yourself if you’ve soaked up a lot of other people’s first. I don’t mean copying what they’ve done, but it does a lot of good to enjoy the fruits of other people’s creativity before farming your own. It gives you energy and joy and a drive to do your best.

The most enjoyable part of writing is getting to talk with people who have read the book, and hearing what they liked and didn’t like! But the easiest is by far the job uniform – I don’t know many other jobs that let you rock up to the office in your pyjamas. And the most difficult is probably being in the house alone with the biscuits all day…

‘The first draft is just you telling yourself the story’, as said by Terry Pratchett. and he was exactly right (about many things, not just this!). The first draft doesn’t have to be perfect, or even good – it’s just getting the skeleton of the story down so you can go back later and make it better.

Persevere. Every author who is published has a history of trials behind them, and no two paths to publication are the same. Eventually, you will find someone who loves your work as much as you do, and that’s the most magical day ever.

My writing routine is up in the air at the moment because my child and my partner are both at home, but usually I write in the morning after the school run, and then do emails and admin in the afternoon. I’m currently editing the second book in The Strangeworlds Travel Agency series, and I am loving it! Flick and Jonathan are taken to a new world in crisis, find new friends, learn old truths, and unravel secrets about The Strangeworlds Society. It’s been a joy to write, and I’m super excited for you all to read it.

How do you connect with your readers and make sure your books will be of interest?

I try to be as available as I can be, within reason. I’m active on social media and I love hearing from readers who have enjoyed the book so far! Hopefully when the world is a little more back to normal I’ll be able to meet some readers in person, and that will be utterly magical! Pack your suitcase for a magical adventure! Read an extract from The Strangeworlds Travel Agency by L.D. Lapinski A summer of secrets and sorcery: Review of The Strangeworlds Travel Agency by L.D. Lapinski All you have to do is step inside: Activities and worksheets for The Strangeworlds Travel Agency by L.D. Lapinski 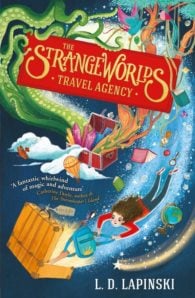 Pack your suitcase for a magical adventure! Perfect for fans of THE TRAIN TO IMPOSSIBLE PLACES and THE POLAR BEAR EXPLORERS' CLUB.At the Strangeworlds Travel Agency, each suitcase transports you to a different world. All you have to do is step inside . . .When 12-year-old Flick Hudson accidentally ends up in the Strangeworlds Travel Agency, she uncovers a fantastic secret: there are hundreds of other worlds just steps away from ours. All you have to do to visit them is jump into the right suitcase. Then Flick gets the invitation of a lifetime: join Strangeworlds' magical travel society and explore other worlds.But, unknown to Flick, the world at the very centre of it all, a city called Five Lights, is in danger. Buildings and even streets are mysteriously disappearing. Once Flick realizes what's happening she must race against time, travelling through unchartered worlds, seeking a way to fix Five Lights before it collapses into nothingness - and takes our world with it. 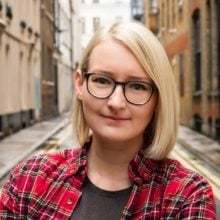 L. D. Lapinski lives just outside Sherwood Forest with her family, a lot of books, and a cat called Hector.When she isn't writing, L.D. can be found cosplaying, drinking a lot of cherry cola, and taking care of a forest of succulent plants.You can find her on Twitter @ldlapinski or at ldlapinski.com 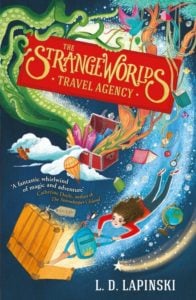