Book of the Week: Masterchef Street Food Of The World Just when we thought we didn’t need another cookbook, along comes an entirely different sort of recipe collection to blow our socks off. Not only does MasterChef Street Food of the World by Genevieve Taylor tantalise the taste buds, it opens up a new whole world of adventurous eating from around the globe.

MasterChef Street Food takes us on a culinary tour, as it celebrates what is the biggest recent food movement: street food. From hipster food trucks, to night markets, to food festivals, street food is the most exciting trend in food right now – and yet it’s not a fad. In fact, street food has been around for centuries, and that’s what this book celebrates.

Street food is refreshingly different to fine and formal dining – it’s fun and fresh, and it’s carefree, social and relaxed. It’s often as equally delicious, or dare we say, even more so, than five-star dining. It has its roots in real life and local ingredients, and while we’re on the road it’s often the easiest to source and the least expensive.

With this cookbook, we can bring the world of street food right into our own kitchens. Many of the recipes are easy to put together, some of them are more intricate, and each one, accompanied by a mouth-watering photograph, gives us instant hunger pangs.

We love how the book is easily referenced and how it takes us around the globe step by step. We can choose the country that interests us, starting with the Americas, including El Salvador, Venezuela, and Peru; then it’s off to Europe; The Middle East and Africa, The Indian Subcontinent; to Asia and Australia.

There’s a geography or history lesson in some of the fascinating descriptions of each recipe’s origins, too – ideal for the food and traveller alike – and it’s packed to the brim with classic dishes, to the more exotic. Delicious delights include traditional Jamaican meat patties; Mexican tamales with pulled pork and chilli sauce; the delicious German version of pizza, Flamkuchen; there’s Polish pierogi, Nepalese chicken momos with pickled chilli chutney. Moving to Africa, we’ve got delicious Nigerian Jollof Rice, said to be the precursor of the Creole classic jambalaya, and there’s Koshari, the national dish of Egypt. In the section on street food from the Indian subcontinent, there’s vegetarian pakoras with mint and coriander chutney and from China, steamed jiaozi dumplings stuffed with pork and cabbage.

Genevieve Taylor is a talented food writer and a food stylist. She has written seven cookbooks including her first, Stew! and its follow-up, Soup! She lives in Bristol, England, with her family and a more-than-is-sensible collection of rescued pets.

Grab a copy here, or check out exclusive recipes for Brik a l’oeuf with chickpeas and harissa, Papdi Chaat, and Polpette! The Little Entertainer: Read an extract from Sweet Adversity by Sheryl Gwyther

Genevieve Taylor is both a gifted food writer and a food stylist with a delicate aesthetic touch. Her first book, Stew! was published in February 2011 and her follow-up book, Soup! in March 2012. Her latest title Pie! is due for publication in March 2014. She lives in Bristol, with her family and a more-than-is-sensible collection of rescued pets. She is one of the brightest voices in food around. Find out more about Genevieve at genevievetaylor.co.uk. 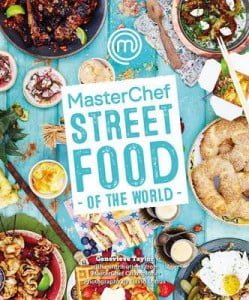