Crime of Another Time: Review of The Turn of Midnight by Minette Walters ‘So great a plague has never been heard of from the beginning of the world to the present day… The sickness befell people everywhere… and generated such horror that children did not dare to visit their dying parents, nor parents their children, but fled for fear of contagion.’

In The Turn of Midnight, the year is 1348, and the Black Death is charting a fatal course across England. Countless people have already perished, and the tiny serf-based village of Develish in Dorseteshire, quarantined thanks to a surrounding moat, 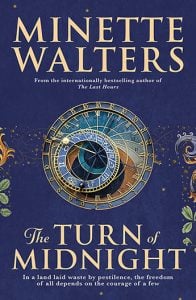 is one of the rare few places unaffected by the merciless plague ravaging the country.

But the inhabitants of Develish have other reasons to be nervous. After months of quarantine, supplies are dwindling dangerously, and each of the villagers knows they will soon be faced with an awful choice: venture beyond the safe haven of Develish in search of food, risking infection and possible death, or stay in the village and slowly starve.

One man, however, is determined to ensure that Develish survives the plague unscathed. Thaddeus Thurkell is a quick-witted, resourceful and educated serf, a deeply likeable character very well rendered by Minette Walters. With the blessing of Lady Anne, the courageous young noblewoman who has led Develish since her husband’s death months before, Thaddeus and a few companions set out on a desperately risky mission, searching for supplies and news to bring back to their people.

As they journey through innumerable villages and towns all decimated by the plague, Thaddeus and his companions realise they can do more than simply bring back food. With England’s strict feudal system thrown into disarray, Thaddeus sees an opportunity to secure freedom for both himself and his fellow Develish serfs, and quickly enlists the help of Lady Anne, who has been working quietly to improve the lives of local serfs since she came to Develish as a bride.

Together, the two concoct a daring plan for freedom: Thaddeus will masquerade as a nobleman, purchase a new plot of land for the serfs of Develish, and thereby free them from their lives of servitude. But just as Thaddeus and Lady Anne are poised to pull off their plan, Walters adds a trademark twist and their endeavours are dangerously undermined. Who is their shadowy betrayer? Can they salvage their plan at the eleventh hour? Freedom and lives hang in the balance, and there’s no guarantee the scales will tip in their favour…

After fifteen years as one of the most successful crime writers in the world, Minette Walters spent a decade away from the limelight, and then blazed back onto the literary scene in 2017 with The Last Hours, an utterly gripping story set in England in the early plague years. The Turn of Midnight, its hotly anticipated sequel, is equally compelling, and although it can easily be read as a standalone, this novel picks up right where The Last Hours left off, continuing the story of the fearless Lady Anne and the brave villagers of Develish as they fight to not only survive devastating pandemic illness, but to survive in a world irrevocably changed.

Moving between the events in Develish, the experiences of Thaddeus and his travelling companions, and extracts from the diary of Lady Anne, The Turn of Midnight is supremely well paced. Walters is a pro at building and maintaining suspense, and as Thaddeus and Lady Anne move closer towards executing their bold plan for Develish’s freedom, the tension already simmering away in the background begins to come to a nail-biting boil.

Given depth and authenticity through Walters’ meticulous research, The Turn of Midnight provides us with a fascinating look at a society in a profound state of flux. The plague razed England’s social structure to the ground, altering the relationships between masters and servants, men and women, the rich and the poor, and these shifting dynamics are absorbingly explored via Thaddeus and Lady Anne, who both rise to positions of leadership unthinkable before the plague.

If you enjoy C.J. Sansom or Philippa Gregory, pick up this masterfully woven tale of pandemic illness, religion, money, power and romance. Our high expectations were more than surpassed, and we are very confident yours will be, too. 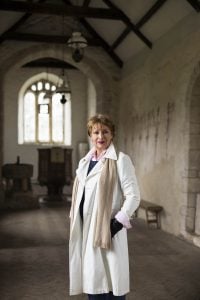 Minette Walters was one of the most successful crime fiction writers in the world. Published to critical acclaim in over 34 countries, each new novel reached the top of the Australian bestseller lists. Her last crime novel was The Chameleon’s Shadow in 2007. The Last Hours saw Minette moving in an exciting direction. She has written an extraordinary historical novel set in 1348, the year the Black Death came to England. The story is brought to a thrilling and satisfying conclusion in The Turn of Midnight. Minette lives in Dorset with her husband.

Purchase a copy of The Turn of Midnight here 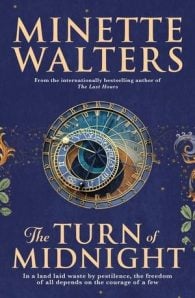 For all those who love Ken Follett's The Pillars of the Earth, and Geraldine Brooks' Year of Wonders comes the worldwide-bestselling Minette Walters' compelling and fascinating historical novel of the Plague years.As the year 1349 approaches, the Black Death continues its devastating course across England. In Dorseteshire, the quarantined people of Develish question whether they are the only survivors.Guided by their beloved young mistress, Lady Anne, they wait, knowing that when their dwindling stores are finally gone they will have no choice but to leave. But where will they find safety in the desolate wasteland outside?One man has the courage to find out.Thaddeus Thurkell, a free-thinking, educated serf, strikes out in search of supplies and news. A compelling leader, he and his companions quickly throw off the shackles of serfdom and set their minds to ensuring Develish's future - and freedom for its people.But what use is freedom that cannot be gained lawfully? When Lady Anne and Thaddeus conceive an audacious plan to secure her people's independence, neither foresees the life-threatening struggle over power, money and religion that follows… 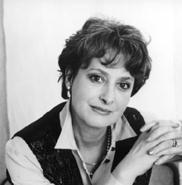 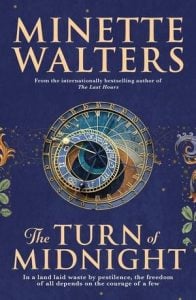 The Turn of Midnight