Emotionally Stunning Novel: Review of The Book of Dreams by Nina George ‘We read a story, and something happens. We don’t know what or why, nor which sentence was responsible, but the world has changed and will never be the same again.’

Ever loved and lost? Walked away from an unfinished relationship still wondering ‘what if?’ Missed an opportunity out of fear or because you couldn’t let go of the past? These among other human experiences are explored in The Book of Dreams, Nina George’s new novel in which a man’s ex-lover and his estranged son hold vigil around his bed after an accident leaves him in a coma. 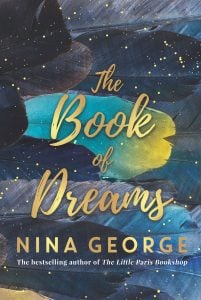 The sea is both a thing of beauty and danger and reading this book is a bit like swimming in the ocean, the story ebbing and flowing as the action moves from the sterile setting of a hospital ward to Paris, London, the wildly beautiful French coastline, a war-zone and fleetingly, into the world of book publishing.

George, who also wrote The Little Paris Bookshop, tells her story through that of publisher Eddie Tomlin (named after her father), Henri, the man she loved and lost and his estranged son, 13-year-old Sam. Henri was on his way to being reunited with Sam for the first time since he was a baby, when the accident happened.

While an unconscious Henri, watched by an anxious Eddie and Sam, floats in the ‘in-between’ world, the disparate threads that have led them to a hospital room with its beeping machines and medicinal smells, unspool.

Henri, we learn, is haunted by his experiences as a war correspondent and by the long-ago death of his father in an accident at sea, convinced as he is that he let his father’s hand go as they struggled to stay afloat after a boating accident. We learn of his fleeting, doomed affair with Sam’s mother, following a traumatic experience in the battle field, and of his intense love affair with Eddie. And of Sam, who sees himself as standing outside and alone from the tight-knit unit that is his mother, step-father and half-brother.

While Eddie and Sam become closer during the vigil, sharing courage and fears, the story opens up to embrace the hospital staff and another coma patient called Madeline, with whom Sam becomes entranced. Little is known about the young, former ballerina who has no surviving family, so Sam, with the help of Eddie, sets about investigating her past for clues that might help awaken her.

The treatment and care of comatose patients (including how you should behave around them) is another strand woven into the story with great skill and while it’s detailed enough to be fascinating, it never becomes boring.

And always, at the centre of everything, there is Henri, his dreams, his regrets, his experiences as he floats between life and death, aware his beloved Sam and Eddie are there, but unable to communicate with them.

The descriptive writing in The Book of Dreams is lovely – ‘the grey streets of London stream past like rivers of sun-baked asphalt’ – and although you’re caught in an updraft of emotions (make no mistake, there will be tears), it does not deliberately tug on the heartstrings, instead relying on great characters, wonderful dialogue and the beautiful, haunting quality of the story itself.

A wonderfully nuanced and powerful reading experience, it’s also a wise and witty book, unafraid to ask questions about life and love. ‘Love changes as we do,’ opines Eddie. ‘I don’t know if I could have loved the way I do now when I was in my mid-twenties. Someone who wants to write truthfully about love would need to write a new novel about the same couple every year in order to tell the story of how their love evolves, how life comes between them….’ 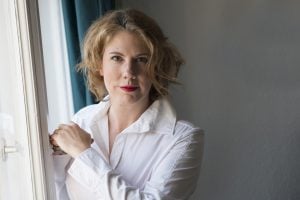 Nina George is the author of the bestselling international phenomenon, The Little Paris Bookshop, which has been translated into more than 28 languages, The Little Breton Bistro and numerous other books that have been published around the world. She also works as a journalist and an advocate for writer and women’s rights. She lives with her husband in Berlin and Brittany, France.

Buy a copy of The Book of Dreams here. 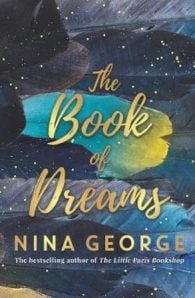 Henri Skinner is on his way to meet his teenage son, Sam, for the first time when he is hit by a car after rescuing a child from drowning. He is rushed to a nearby hospital where he floats, comatose, between dreams about his childhood and the secrets that have kept him from his son. Sam reads about it in the newspaper – his father is a hero, now in a coma in hospital.After the accident, Sam waits by Henri’s bedside every day. Due to a condition called synaesthesia, Sam can sense things the doctors can’t – he can see the colours of his father’s thoughts and dreams. At the hospital he also meets Eddie Tomlin, a woman forced to confront her love for Henri after all these years, and twelve-year old Madelyn Zeidler, another coma patient and the sole survivor of a traffic accident that killed her family.The Book of Dreams is a beautiful, bittersweet story about what love means: the exquisite stirrings of first love, the love between fathers and sons, friendship and family, life, death – and making peace with the past in order to find a future. 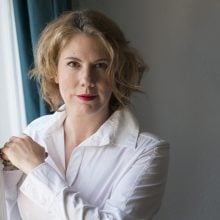 Nina George is the author of the bestselling international phenomenon, The Little Paris Bookshop, which has been translated into more than 28 languages, The Little Breton Bistro and numerous other books that have been published around the world. She also works as a journalist and an advocate for writer and women’s rights. She lives with her husband in Berlin and Brittany, France. 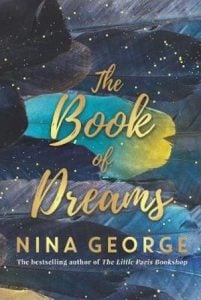 The Book of Dreams