‘With artificial intelligence, we are summoning the demon’.

It’s Christmas Eve, and Commander Grayson Pierce is looking forward to the holidays. As the head of Sigma Force, a covert team of scientific and Special Forces operatives tasked with protecting the United States from all kinds of danger, Gray lives life on a knife-edge, and he’s always wondering where the next threat is going to come from.

For the next few days, however, Gray gets to leave his worries behind. His best friend and fellow 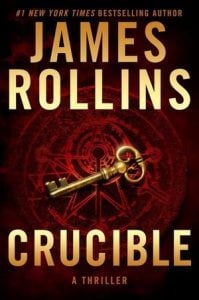 Sigma Force member, Monk Kokkalis, is in town with his family, and Gray can’t wait to spend Christmas with Monk, Kat and their daughters Penny and Harriet, as well as with his own wife Seichan, eight months pregnant with their first child.

But life has other plans, and when Gray and Monk return from the local bar on Christmas Eve, they find Gray’s front door broken and ajar, Kat bloodied and unconscious, Seichan, Penny and Harriet gone without a trace.

Terrified for the wellbeing of their families, Gray and Monk spring into action, and discover that Seichan, Penny and Harriet have been kidnapped by a familiar enemy, the Guild. The Guild knows Sigma Force is connected to the development of a game-changing artificial intelligence system, and they’ve taken Seichan and the girls hostage as a means of securing the AI for themselves.

But the Guild isn’t the only group vying for control of the AI. The Crucible, a shadowy sect born of the Spanish Inquisition, are intent on hijacking the AI to destroy modernity and propel the world back to the Dark Ages. They plan to attack electrical systems and telecommunications the world over, beginning in the City of Light itself.

In a frantic cross-continental chase, Gray and Monk must track down both the Guild and the Crucible, not only to save the AI, but to save their families, too. When the warring groups finally face off deep in the bowels of an ancient fortress in the Pyrenees, a shocking secret is revealed, and Sigma Force risk losing the fight. Can Gray and Monk turn things around at the eleventh hour? Or are the odds stacked too high against them?

As the 14th installment in the bestselling Sigma Force series, Crucible is another great read, stunningly crafted, from the prodigious James Rollins. A pro at blending history, action and cutting-edge science, his talent is on full display in Crucible. While telling a thrilling tale, the book charts the latest fascinating AI developments, and as Gray and Monk track down the sinister Crucible, we’re taken on a journey that leads all the way back to the witch trials of 17th Century Europe, and to the rise of the Spanish Inquisition.

Fans of the Sigma Force series will be delighted by the return of charismatic, whip-smart Gray, with his sidekick Monk, and the pair’s desperate quest to track down their families before time runs out gives this story a compelling emotional core. Gray and Monk’s very personal stake in the outcome ratchets up tension and provides more than a few nail-biting scenes.

Packed full of thrills, Crucible is the complete read, an engrossing tale of light versus dark, the ramifications of new technology, and the vital importance of family. With a perfectly paced plot and an emotional depth that sets it apart, it’s sure to be enjoyed by fans of Dan Brown, Michael Crichton and Matthew Reilly, as well as those who don’t usually dip into this genre. 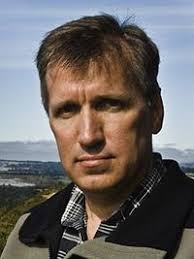 James Rollins is the #1 New York Times bestselling author of international thriller that have been translated into more than forty languages. He lives in the Sierra Nevada mountains.

Purchase a copy of Crucible here Thrills, Spills and History: Review of Crucible by James Rollins 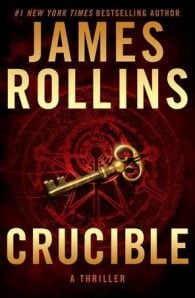 In the race to save one of their own, Sigma Force must wrestle with the deepest spiritual mysteries of mankind in this mind-expanding adventure from the #1 New York Times bestselling author, told with his trademark blend of cutting edge science, historical mystery, and pulse-pounding action.Arriving home on Christmas Eve, Commander Gray Pierce discovers his house ransacked, his pregnant lover missing, and his best friend’s wife, Kat, unconscious on the kitchen floor. With no shred of evidence to follow, his one hope to find the woman he loves and his unborn child is Kat, the only witness to what happened. But the injured woman is in a semi-comatose state and cannot speak—until a brilliant neurologist offers a radical approach to "unlock" her mind long enough to ask a few questions.What Pierce learns from Kat sets Sigma Force on a frantic quest for answers that are connected to mysteries reaching back to the Spanish Inquisition and to one of the most reviled and blood-soaked books in human history—a Medieval text known as the Malleus Maleficarum, the Hammer of Witches. What they uncover hidden deep in the past will reveal a frightening truth in the present and a future on the brink of annihilation, and force them to confront the ultimate question: What does it mean to have a soul?

James Rollins is the author of seven previous bestselling novels. An amateur spelunker and scuba enthusiast, he also holds a doctorate in veterinary medicine. He currently lives and writes in Sacramento, California. 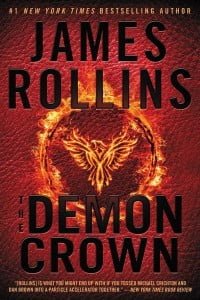