Gutsy, Romantic, Inspiring: Review of The Cinema At Starlight Creek by Alli Sinclair Starlight Creek, 1994. Claire Montgomery is enjoying the scent of eucalyptus through the open window as she drives past trees and gently swaying sugar cane. But not all is well in her world. Not everyone is thrilled with her recent promotion as location scout on a mini-series and when things go belly up as they do, she has to answer to the director, a snarly type. 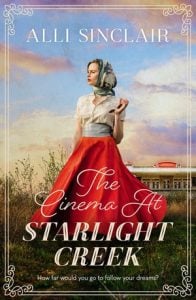 Hollywood, 1954. Aspiring starlet Lena Lee is smoothing down her figure-hugging, mint green dress in an attempt to calm her nerves as she walks into a mansion where an army of servants are attending to women in ball gowns and tiaras, men in jet black tuxedos – Hollywood royalty. Lena arrived in LA three years ago, but so far, despite all her efforts – and talent – she hasn’t been able to break into the big time.

Those who love romance, historical fiction and vintage Hollywood glamour, will enjoy Alli Sinclair’s heart-felt story of two young women following their dreams, decades apart. Love, passion, great friendship – and lethal enemies – abound but above all, it’s the courage of the two heroines in the face of many perils that shines in The Cinema at Starlight Creek.

Although trying to build careers at very different times, Lena who’s in front of the camera and Claire who’s on the other side of it, are both in show business, passionate about the art of bringing stories to life on the screen. Alongside their enthralling personal stories are glimpses of the industry behind the scenes, from the makeup room to the marketing and casting.

Some of it is glamorous but all that glitters, is not gold. Lena has to contend with bitter behind the scenes rivalry and jealousy. The motion picture studios have a habit of weaving lies around their stars and their private lives, lies that the stars including Lena have to live up to. Working conditions and rules for actresses in Hollywood back then, were dreadful. And you had McCarthyism casting a dark shadow over Hollywood, with actors blackballed for allegedly supporting Communism.

Claire is enchanted with the beauty of the Queensland countryside, the big skies and blazing stars at night, but she soon discovers that small rural towns can have a nasty under-belly and aren’t always welcoming to outsiders. When the womanising lead actor in the mini-series has his way with a local gal, all sorts of strife develops, not the least of which is that Claire is forced to have to find another art deco cinema as a backdrop for the mini-series – and get permission to film in it. Standing in her way is octogenarian, cinema owner Hattie Fitzpatrick. Hattie, dead set against the idea, is backed up by the surly but handsome great nephew, Luke. Not to mention half the town are hostile to the idea.

Poisonous secrets of the past, setbacks, vendettas, betrayals and tragedy are a part of a plot lit up by the magical empowerment of friendship, passion – and the rich rewards of sticking to your guns.

Sinclair is a warm writer who creates characters with heart and has a sharp eye for hypocrisy and injustice. Claire and Lena are very much women battling against loaded dice as they work their way up the ladder in a man’s world. Bolshie Lena is paid much less than her male co-stars and has to stay stick thin. Chorus line girls are treated abominably, living in harsh conditions and working long hours. The male stars are judged by their looks as well, but they don’t have to be svelte – and they’re not expected to be the paragons of virtue female actresses were expected to be.

Gutsy Claire who also has a delightful streak of the rebel in her, is living in different, more liberated times, but still judged more harshly as a female on and off the film set and is less likely to be able to fulfil her dreams because of her gender. Her male boss is a bully and several of the locals, all men, also attempt to bully her.

Not only a good, gutsy, historical drama with a good dollop of romance, The Cinema At Starlight Creek inspires us to keep on following that dream and to stand up for ourselves, while gently reminding us just how far women have come – and how much further we still have to go. 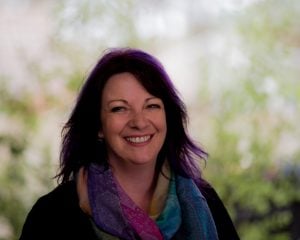 Buy a copy of The Cinema At Starlight Creek here.

This is the last chance to enter Harlequin Books’s Herstory competition! WIN prizes valued at over $1000 with Herstory: Books that write Her back into History at harpercollins.com.au/herstory. 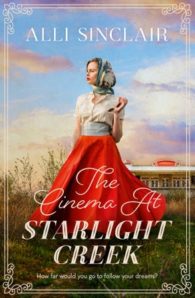 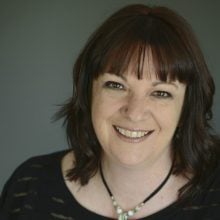 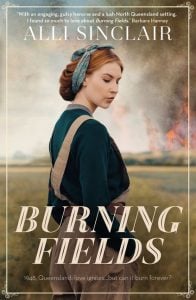 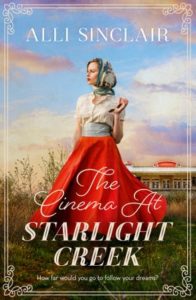