Hilarious and Heartbreaking: Review of The Sparkle Pages by Meg Bignell The Sparkle Pages is the story of one woman’s attempt to rediscover the passion in her marriage to an oft absent husband in a life full of ‘to do’ lists, smeared table tops and missing socks. Often hilarious and deeply touching, it’s one of the most anticipated Australian debuts of the year and not only because it’s refreshingly set in Tasmania, where not much local fiction seems to go. 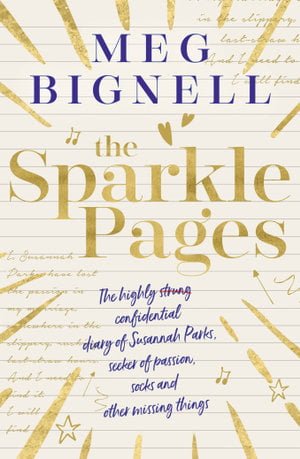 When first we meet Susannah Parks, the former virtuoso musician, now mother of four married to engineer Hugh for 15 years, she has taken to regularly sitting in a wardrobe at home whenever she feels under the pump, and on the verge of losing her temper and yelling at everyone.

Told in conspiratorial diary form, the rollicking domestic drama sees Susannah, who’s feeling forlorn and flat about the lack of excitement in her marriage, come up with a bright idea called the Sparkle Project. She will become interesting, deeply attractive, stylish and a sultry, sexy, vamp in the bedroom. She and Hugh will learn new tricks, re-ignite the spark and live happily ever after.

The diary switches between the present and Susannah’s various efforts to zhoosh up her marriage and the past, to when the couple first meet. Susannah is not altogether unrealistic. She knows that you ‘can’t be in full wedding day love all of the time.’ Yet when she looks at a wedding photograph, she feels ‘horribly jealous of that bride, all flushed with love and possibility.’

There are funny, laugh-out-loud bits everywhere. ‘Hugh and I were married in the church by a nervy new minister in transition lenses.’ Deeply sad moments. And moments of high intensity, when Susannah whips herself up into a frenzy over nothing much. She’s an A-grade drama queen with a heart of gold.

Part of what’s sad about The Sparkle Pages is Susannah’s low opinion of herself. Of her body. Her hair. Her clothes. Her skin, you name it. Other times it’s about her behaviour and the way people look at her when she blurts out something odd or unexpected. She is, as Hugh says, ‘a lovable weirdo.’

Her bestie, Ria, is great. ‘…a more determined, potty-mouthed, lion-hearted girl-woman has never lived.’ Hers is the voice of reason who tethers Susannah to reality. Ria is the only one she listens to, if only for a moment before leaping back onto her mad bullet train of self-doubt.

Just so you know, the diary contains some startling, candid (and yes, at times embarrassing) confessions. Not only about sex and marriage, but the whole messiness of family life is well enshrined in this book – the school drop-offs, the fights in the back seat, the stains and spills, the litany of lost things… ‘MUM, where is…?’

There are tricky questions, like the one asked by their son, Raffy, upon spotting ducks mating on a TV documentary. ‘Is that duck murdering the other duck?’ And moments that perfectly capture the way children can annoy the hell out of you one minute, and melt your heart the next with their innocence and sweetness and love.

Hugh is nice, sensible and loving, but he does not pull his weight, either as a husband or father. Those whose husbands can vacuum as well as network and are intent on being deeply involved with the rearing of their children no matter how many careers are being juggled, will want to smack him. We do understand that there are still Hughs in the world by the way – we’re just glad we’re not married to them.

The big fracture line that runs through Susannah’s life is her refusal to play her instrument, the viola. That she won’t pick it up, let alone play a note, is an intriguing mystery that keeps you guessing.

Entertaining, emotional, full of lunatic charm and startlingly honest, The Sparkle Pages takes you on an unforgettable journey, deep into the heart of a woman, her marriage and her family. Full of wit and wisdom, it shows us how when things go badly wrong in life they have the power to change us, but only if we let them. Meg Bignell was a nurse and a weather presenter on the telly before she surrendered to a persistent desire to write. Since then she has been writing almost every day – bits and pieces here and there, either to earn a crust, to get something off her chest or to entertain herself. She has written three short films, mostly because she wanted to do some acting and no one else would cast her. She sings a bit too, occasionally writes and performs cabaret, but is mostly very busy being a mother to three and a wife (to one). She lives with her family on a dairy farm on Tasmania’s East Coast.

Buy a copy of The Sparkle Pages here. 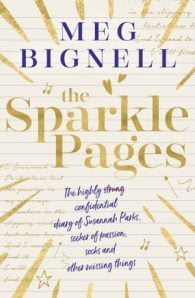 A wonderfully original and heartfelt comic novel about one woman's mission to reignite the passion in her marriage - and rediscover herself.

Is marriage just a series of texts about where the children are and whether we need milk until one of you dies?’Susannah Parks – wife, mother, cleaner of surfaces and runner of household – is a viola virtuoso. Except she hasn’t picked up a viola for over a decade. She has, however, picked up a lot of Lego, socks, wet towels and other exhibits of mundanity. She has also picked up on the possibility that her husband has lost interest in her. (And frankly, she’s not very interested in Susannah Parks either.) But this year, she has resolved to be very interesting. Also thoughtful, useful, cheerful, relevant, self-sufficient, stylish, alluring and intelligent.In her highly confidential diary, Susannah documents the search for the elusive spark in her marriage, along with all the high and low notes of life with her four beloved children, with her free-spirited (and world famous) best friend Ria, and with Hugh, the man who fills her heart with burning passion and her washing pile with shirts.And perhaps amid the chaos she might be brave enough to find the missing pieces of herself.WARNING: CONTAINS STRONG LANGUAGE, SEX SCENES AND FANTASIES ABOUT HUSBANDS UNPACKING THE DISHWASHER. 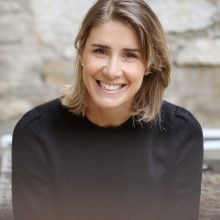 Meg Bignell was a nurse and a weather presenter on the telly before she surrendered to a persistent desire to write. Since then she has been writing almost every day – bits and pieces here and there, either to earn a crust, to get something off her chest or to entertain herself. She has written three short films, mostly because she wanted to do some acting and no one else would cast her. She sings a bit too, occasionally writes and performs cabaret, but is mostly very busy being a mother to three and a wife (to one). She lives with her family on a dairy farm on Tasmania’s East Coast. She is the author of The Sparkle Pages. 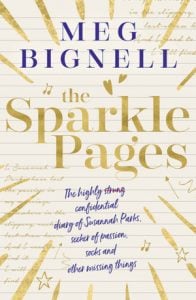