This classic sponge cake recipe is by Margaret Fulton, from The Great Australian Cookbook.


Margaret Fulton is one of Australia best loved cookery experts. Sometimes referred to as the ‘matriarch’ of Australian cooking, she was one of the pioneering writers and commentators on cooking in Australia and has even been credited with changing the way Australians eat. Her original The Margaret Fulton Cookbook, first published in 1968, sold over 1.5 million copies and taught generations of Australian families how to cook and entertain. She was nominated by the National Trust as an Australian Living National Treasure and, in 2009, she was named by a Sydney Morning Herald panel as one of five Australians who has most changed the nation. Her early recipes encouraged Australians to vary the staples of meat and three veg and be creative with food.

Pre-heat the oven to 200°C. Grease and line the base of a 22 cm cake tin. Sift the flour and cornflour together, and set aside.

Using an electric mixer, whisk together egg yolks, the 100 g caster sugar and vanilla for 2–3 minutes, until thick and mousse-like. Set aside.

Whisk egg whites until starting to froth, then add cream of tartar and continue to whisk until stiff but not dry. Whisk in the 2 tablespoons of sugar gradually.

Fold a large scoop of whisked egg white into the beaten yolks, to slacken the mixture, then fold in the sifted flour and finally the remaining egg whites, until just combined.

Turn the mixture into the prepared tin, gently smoothing the top. Place in the oven, reduci

ng the temperature to 170°C, and bake for 30 minutes. Check if the cake is cooked before taking it out of the oven by very gently pressing with an index finger to check if the centre of the cake is firm. If so, remove from the oven and check the centre with a very fine cake skewer – it should come out clean. Leave to cool in the tin for 5 minutes before removing to cool completely on a wire rack, to make sure the top is nicely set.

Once cooled, split the cake by cutting with a sharp serrated knife into two even rounds. Top the base with whipped cream and strawberries, then place the cake top on.

When ready to serve, dust with icing sugar.

Instead of splitting one sponge, this classic cake can be made by baking two sponges and sandwiching them with the cream and strawberries.

For more on The Great Australian Cookbook or to purchase a copy, click here 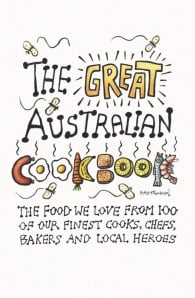 Featuring 165 recipes, from tried and true Aussie classics to contemporary cuisine that reflect Australia's ethnic diversity and fresh local produce, The Great Australian Cookbook is a celebration of local cuisine.One hundred of Australia's finest cooks, chefs, bakers and local heroes let us into their homes and their hearts as they share their favourite recipes they make for the people they love.Each recipe is accompanied by stunning original photography shot entirely on location that captures the essence and nature of this beautiful country of ours.With original cover artwork from acclaimed artist Reg Mombassa, this Australian collection is a celebration of the food we love, made for the people we love, and is set to become a classic.Contributors Include: Adriano Zumbo, Charmaine Solomon, George Calombaris, Kylie Kwong, Maggie Beer, Margaret Fulton, Matt Moran, Monday Morning Cooking Club, Neil Perry, Peter Gilmore, Peter Russell-Clarke And Stephanie Alexander 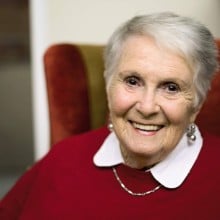 Margaret Fulton is one of Australia’s leading and best-loved cookery experts. The matriarch of Australian cooking, she has been credited with changing the way Australians eat. Her original The Margaret Fulton Cookbook, first published in 1968 sold over 1.5 million copies and taught generations of Australian families how to cook and entertain. Margaret has been nominated by the National Trust as an Australian Living National Treasure and, in 2009, she was named by a Sydney Morning Herald panel as one of the 25 Australians who has most changed the nation. 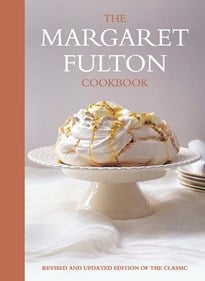