A tender and moving tale of motherhood and family, The Whole Bright Year tests just how far you would go for your loved ones.

Debra Oswald is an award-winning Australian writer. The head writer and creator of the top-rating Aussie TV show, Offspring, Debra has written numerous plays and children’s novels. Her first adult novel, Useful, in 2015, which was an entertaining story about the meaning of life, added to her impressive legacy – and The Whole Bright Year doesn’t disappoint, in fact it shines with flawless storytelling, wit and warmth.

In The Whole Bright Year (written originally as a stage play, called The Peach Season), Oswald tackles the matter of offspring again, except this time it’s in the sense of a child becoming a mutinous teenager threatening to go astray. It’s a story about wanting to hold on, but knowing you have to let go and of first love that strikes like lightning.

Set in the summer of 1976, it’s picking season on an Australian orchard where the trees are weighed down by plump, ripe fruit, warmed by the sun. It’s hot and dusty and the living is easy. Here, we meet Celia who is originally from the city. When her her husband was killed shockingly and suddenly, Celia fled the chaotic urban lifestyle  with her newborn child Zoe, looking for peace and safety in the country. Celia and Zoe, who is now sixteen, run the orchard with help of local pickers and there’s an air of contentment with their simple, slow life.

Of course, you can’t avoid outside influences forever. When Sheena and her eighteen-year-old brother Kieran come to the town, they find work at the orchard. They are desperate, both for money and to escape their hard past. Bit by bit, details of their disturbing past emerge, surprising Zoe and worrying Celia as her daughter is becoming ever more attached to bad boy Kieran who is like the fox in the henhouse.

At first, Zoe can only watch as the attraction between her daughter and Kieran grows stronger, but when things turn bleak, Celia must make the decision – how far will she go to protect her daughter?

It’s a curious conundrum as Celia wrestles with the knowledge that the path Zoe has taken leads to devastation, yet also understands that overbearing parenting will only contribute to the rift between her and her daughter. Oswald navigates the dilemmas of parenthood with skill and insight, showing she knows only too well how hard it is to achieve that delicate balancing act between allowing your children to grow up and make their own mistakes, while keeping them safe.

The rural setting of The Whole Bright Year adds to the novel’s intensity with the scorching heat and the sweaty hard work of fruit picking fuelling emotions. The characters are well-rounded – like so many of Oswald’s other creations, they all have distinct personalities that come gloriously alive on the page. Polish worker, the ever sharp and perceptive Roza, is a highlight of the novel. (We all wish for a Roza in our life).

The Whole Bright Year is a wonderful read – emotional, atmospheric, full of heart versus head moments. Not just for parents, it’s for anyone who knows too well the devastating impact that family love, either too much or too little, can have.

Debra Oswald is a two-time winner of the NSW Premier’s Literary Award and the creator/head writer of the first five seasons of the TV series Offspring.

Her stage plays have been performed around the world and are published by Currency Press. Gary’s House, Sweet Road and The Peach Season were all shortlisted for the NSW Premier’s Literary Award. Debra has also written four plays for young audiences – Dags, Skate, Stories in the Dark and House on Fire.
Her television credits include Police Rescue, Palace of Dreams, The Secret Life of Us, Sweet and Sour and Bananas in Pyjamas. Debra has written three Aussie Bite books for kids and six children’s novels, including The Redback Leftovers and Getting Air. Her first adult novel, Useful, was published in 2015. 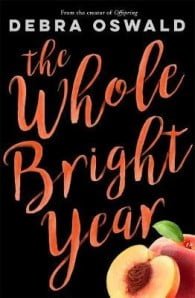 In the summer of 1976 it’s picking season on an Australian stone-fruit orchard run by Celia, a hard-working woman in her early forties. Years ago, when her husband was killed as a bystander in an armed robbery, Celia left the city and brought her newborn daughter Zoe to this farm for a secure life. Now sixteen, Zoe is a passionate, intelligent girl, chafing against her mother’s protectiveness, yearning to find intensity and a bit of danger.Barging into this world as itinerant fruit-pickers come a desperate brother and sister from Sydney. The hard-bitten Sheena has kidnapped her wild, ebullient eighteen-year-old brother Kieran and dragged him out west, away from trouble in the city. Kieran and Zoe are drawn to each other the instant they meet, sparking excitement, worry, lust, trouble . . .How do we protect people we love? How do we bear watching them go out into the perilous world with no guarantee of safety or happiness? What bargains do people make with darkness in order to survive? From the creator of Offspring and author of Useful, The Whole Bright Year is a gripping, wry and tender novel about how holding on too tightly can cost us what we love.About the AuthorDebra Oswald is a two-time winner of the NSW Premier’s Literary Award and the creator/head writer of the first five seasons of the TV series Offspring.Her stage plays have been performed around the world and are published by Currency Press. Gary’s House, Sweet Road and The Peach Season were all shortlisted for the NSW Premier’s Literary Award. Debra has also written four plays for young audiences – Dags, Skate, Stories in the Dark and House on Fire.Her television credits include Police Rescue, Palace of Dreams, The Secret Life of Us, Sweet and Sour and Bananas in Pyjamas. Debra has written three Aussie Bite books for kids and six children's novels, including The Redback Leftovers and Getting Air. Her first adult novel, Useful, was published in 2015. 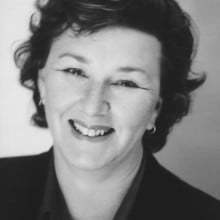 Debra Oswald is a writer for film, television, stage, radio and children's fiction. Her novels for teenagers include Getting Air and Blue Noise, and her children's novels include The Redback Leftovers, Me and Barry Terrific, The Return of the Baked Bean and The Fifth Quest.Her plays include Gary's House and Sweet Road, which were shortlisted for the NSW Premier's Award. Her best known play, Dags, has been performed in Britain and the United States. In 2008 Stories in the Dark won Best Play in the NSW Premier's Literary Awards.Debra's television credits include Police Rescue, Palace of Dreams, Bananas in Pyjamas and The Secret Life of Us. She is creator and head writer of the Channel 10 drama series Offspring, for which she won a NSW Premier's Literary Award in 2011. 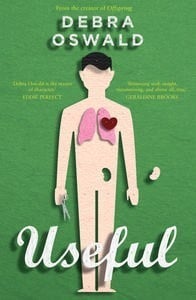 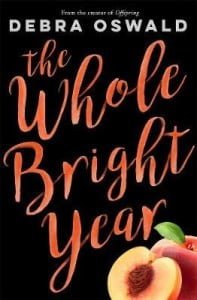