R.A. Spratt the author of The Peski Kids, Friday Barnes and The Adventures of Nanny Piggins shares the reading strategies she uses with her own children. 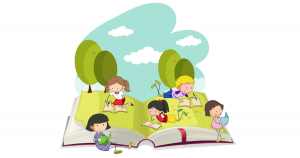 Strategies for encouraging children to read . . .

I’m not a teacher so this isn’t really my area of expertise, but I can tell you what I do with my own children. I’ve got two daughters and with them I’ve had to use two different strategies.

For my oldest daughter I borrowed an idea from James Patterson. I read in an interview that he got his son to read by forcing him to do it. In the summer holidays his son had to read for an hour a day. By the end of the holidays his son had improved his reading, found more books and authors he liked and formed the habit of reading which he then voluntarily kept up.

So I tried that with my daughter. And it worked. It got her past that point of having read every book about Billie B Brown but struggling with harder books. I backed it up with regular trips to the local bookshop to pick out books, or find books that she would like. And I got her a Kindle so that when she gets on a roll with a series she can push on and binge read the books one after another, even if she finishes the last one late on a Sunday afternoon.

Then to reinforce this I literally pay her to read as well. The deal is, if she finishes ten books in a term I’ll pay her $50 on the first day of the holidays. But she has to finish all ten or she doesn’t get a dollar. And they have to be proper chapter books, no cheating.

My younger daughter has a very different personality. She isn’t so financially avaricious. She’s very sociable, she wants to be with people and be talking to people. So even though she quite enjoys reading, that last thing she wants to do is go to her room and be on her own.

A friend of mine from the gym was telling me about his son who is a lot older but has a similar issue, so to get him reading he sits down and reads with his son. He doesn’t read to him. They each have their own book, it’s just that his son doesn’t want to be on his own. So he’s happy reading if there is someone right next to him.

So I’ve tried that with my daughter. Sometimes I sit and read with her, or sometimes I get her to sit nearby while I’m tidying up the kitchen and making lunches. Sometimes when I take a nap, she doesn’t want to be on her own, so she comes and reads her book next to me while I’m sleeping.

And again, I back this up with regular trips to the bookshop. I buy the books she wants to read, not the ones I want her to read. That can come later. Right now, it’s about teaching her the habit and learning the basic skills.

Read our review of The Peski Kids: The Mystery of the Squashed Cockroach

Read our review of The Peski Kids: Bear in the Woods