Richly Rewarding Reading: Review of A Diamond in the Dust by Frauke Bolten-Boshammer Love can take us to some very unexpected places. Take a young German woman called Frauke Bolten, whose marriage took her from Europe to a dusty frontier home in the Kimberley, to floods, crocodiles and a life full of twists and turns.

Her amazing story, from young wife and mother battling to survive the heat and 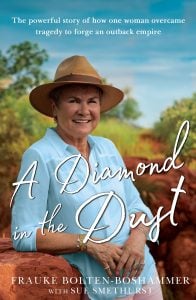 hostility of the Australian outback to purveyor of fine diamonds with a client list that includes Nicole Kidman, is told with love, laughter and tears in her just released autobiography, A Diamond in the Dust.

When we first meet Frauke on the book cover, she is wearing a linen shirt and a bush hat, her skin bronzed from over half a lifetime of broiling summers in Australia’s far north. Inside, we retrace her life in Germany leading up to her wedding day, and there’s a photograph of her as a bride, a single flower pinning her long veil that flows down over her modest, second-hand wedding dress.

Friedrich, her new husband, the son of a local, respected farming family, stands beside her in his dark suit. Little did Frauke know that deep within this earnest, unassuming young farmer, lurked a man with a bad case of wander-lust, and become a dreamer always on the look-out for ‘something bigger and better on the horizon.’

The story of this Sarah Henderson-like saga begins in the 1970s, when the ‘summer of love’ clearly has not yet arrived in rural Germany where the men were still making all the decisions. Hence, Frauke is ‘told’ what’s happening, never consulted. Friedrich simply announces his mad plans for the family, his mind is already made up – they are off to Rhodesia, now Zimbabwe.

When it becomes too dangerous to stay there, the experiment has to be terminated and they are forced to return home to Germany. The African experience however, rather than giving off warning signals about the risks of farming in unknown foreign parts, has had the opposite effect on Friederich who’s fallen in love with the idea of ‘bringing life to the harshest earth,’ and next he decides to take his young family to outback Australia.

Frauke fights the idea but after weeks of arguments caves, feeling she is left with ‘no choice’ and they arrive in Kununurra, on the border of the Northern Territory and WA, 3,200km from Perth, eight hours’ drive from the nearest major town, three small children in tow, a young mother filled with ‘crippling fear.’

‘Do you know what Kununurra is like?’ a flight attendant smugly asks Frauke as they board the plane in Perth.

Ramshackle, as it turns out. The tiny town has few shops offering little fresh food. The soil is choked with weeds, crops fail, the house is uninhabitable and is flooded during their first wet season. Friedrich knows nothing about farming in the Kimberley climate. It’s a disaster, to put it mildly.

While the adults struggle, the children are mad about their new exotic home and like penned-up chooks, love being allowed to roam free range. And there are moments when everyone, reader included, is awe-struck by the great natural beauty of the place: The pale pink sunsets. The silence. The night sky. ‘Millions of tiny stars began to sparkle in the darkness – so many stars I didn’t know where to start looking. I’d never seen anything so beautiful.’

Another ‘aarrrgh’ moment of a different kind is when Midnight the family cat discovers a metres long King Brown snake inside the house, lying along the passage and around the corner into the laundry.

Reading about Frauke weathering everything life throws at her, including personal tragedy, is inspiring, especially given that she not only survived but eventually thrived, bravely pursuing an entrepreneurial career selling rare pink diamonds in a place where if the crocs, the isolation or the snakes don’t get you, the heat alone can send you insane.

But it was at a cost and the disappointment and despair is movingly depicted in this memoir that boasts an easily readable writing style, with moments of great tenderness and rawness.

Amidst the incredible adventures of a family blown off course to a far-flung land can be found all the stuff that makes us human – tempests and tragedies, stoicism borne of disaster, the empowerment of female friendship and in Kununarra’s most shining moments, the ‘unwritten and unbreakable community spirit…the backbone of the Australian outback.’ 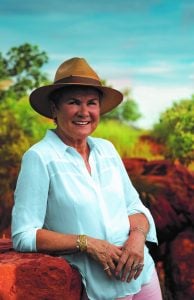 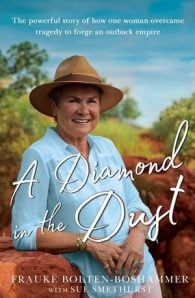 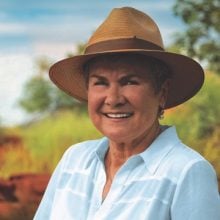 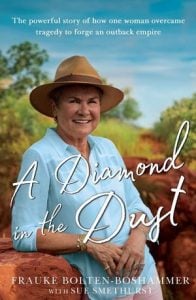