Subtle, Brave and Original: Review of The Children’s House by Alice Nelson ‘It was as if she were some distant aunt returned from abroad, not the vanished mother who had loomed so large in his memory.’ 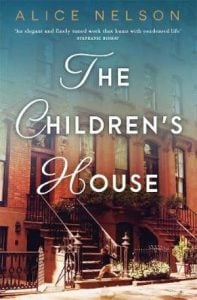 During a sweltering summer in 1997, Marina is out walking when she spies a small African child lying on the streets of Harlem. He is screaming and crying wildly, kicking so violently that one of his plastic sandals flies off. Nearby, a young woman, his mother, turns her back and walks away without looking back once. Shocked, Marina rescues him, dusting him down and fastening the lost sandal back onto his foot before returning the boy to the young woman who has stopped at the lights. She notices one of the buckles on his sandals is broken.

Would his mother have kept walking if not stopped, a shaken Marina wonders? She can’t be sure. In that moment, as Marina watches mother and child walking away, neither she nor those closest to her could have possibly predicted the beginning of a connection that would spark a chain of life changing events. ‘A strange unfolding’ says Marina, looking back later.

The simple thread that connects us all – we are all someone’s child, for better or worse – lies at the heart of Alice Nelson’s thought-provoking and beautiful book, The Children’s House. Families, mothers, their absence and presence, the giving of love and withdrawing of it, the potency of childhood experiences, the things that make us and break us, Nelson’s prime concerns.

Spellbinding storytelling at its best and purest, it’s full of intriguing questions you are left thinking about long after the final page – if you’ve not been mothered properly, can you learn it, like most things in life? Can you be nurtured by someone else mothering you?

Circumstances largely beyond their control have shaped the lives of most of the characters in The Children’s House. Australian writer, Nelson, has been ambitious, choosing to set her story far from home, mostly in the US but tethered as well to events in Israel and Rwanda. Not easy, but she pulls it off with panache.

Marina, a writer and academic and her brother were raised on a kibbutz before being brought to the US by their widowed mother. With only a vaguely remembered idea of a kibbutz being some kind of experimental communal living in the newly formed Israel way back when, it comes as a shock to learn that children were separated from their parents, made to live in their own quarters together and raised in a group. Even new babies were dropped off to separate living quarters. The group house in which Marina and her brother began their lives was known as The Children’s House.

Marina’s psychoanalyst husband Jacob, was likewise born in a kibbutz, the difference being his mother, unable to bear being separated from him soon after birth, sacrifices her idealistic ambitions to help set up the new state of Israel and heads back home to the US, her place of birth.

You know Marina’s mother is strangely absent, but not why or what has happened to her until near the end. And you know Marina’s brother died terribly young but not how he died. These unanswered questions help drive the story, along with Marina’s increasing entanglement with the woman she happened upon in the street, Constance, a refugee from Rwanda and her little boy, Gabriel, an entanglement that alarms Jacob who sees her involvement in ‘the precarious lives of others’ as an act of ‘recklessness.’

Into that picture comes Jacob’s family, his son from his disastrous first marriage and Jacob’s own parents. Strange though it may sound, an interesting Irish nun called Vera plays a pivotal role in events, albeit unknowingly and from a distance.

The Children’s House shifts effortlessly between time and place and family members. Nelson does this with great skill, rendering characters beautifully and the web of fragile emotions connecting them. You feel yourself drifting as you read, leaving your own life behind, as the story draws you in, slowly, almost hypnotically

Much of the action takes place in ‘foreign and magical’ Harlem, where Marina and Jacob live in a renovated brownstone. Nelson brings this part of New York to life, painting it with colour and energy, from the old Italian women sweeping their steps to the beggars and their paper cups in the subway and the young Mexican women selling tamales on street corners. The place hums with life.

If you’re more used to the pumping pace of thrillers devoured at breakneck speed, it will take you a while to get used to the gentle rhythm of Nelson’s story which starts slowly, then sweeps over you in a great wave, taking you with it. It’s like a tide pulling you out, then delivering you back onto the beach, powerful, impossible to resist.

Full of shifting perspectives that shine a light on what hurts us and heals us, a strong thread of hope runs through The Children’s House like a vein of gold. Life can be bad, but we can find home and love and family in the most unexpected places, Nelson’s book seems to say.

Whether it’s a sky, a sunset or a rainstorm or an emotion, Nelson’s luminous prose alone is worth the price of admission. Her descriptive writing is particularly good, delivering textures and graphic images: A magnolia bloom in a green glass vase looks like ‘an enormous soft butterfly.’ An Irish sky is the colour of ‘stone’ on a snowy day. A corduroy skirt, ‘soft like the fur of a small animal.’

From every twist and turn of the characters’ lives, to its well painted scenes and big, warm heart, The Children’s House stands out as one of the finest and most deeply rewarding reading experiences of 2018. 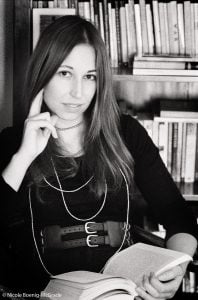 Alice Nelson was named one of the Sydney Morning Herald’s Best Young Australian Novelists for her first novel, The Last Sky. Alice’s short fiction, essays and reviews have appeared in publications such as The Sydney Review of Books, The Asia Literary Review, Southerly Magazine and the West Australian Newspaper. The Children’s House is her second novel.

Purchase a copy of The Children’s House here 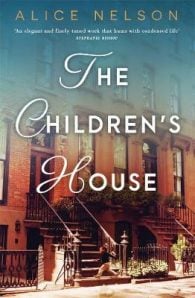 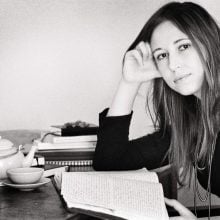 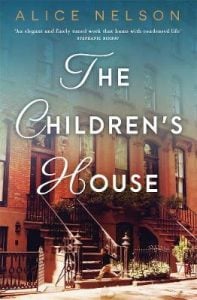