After almost a decade of waiting, it’s finally here.

Markus Zusak, author of bestselling novel and film adaptation The Book Thief, has just announced that he is publishing his new book Bridge of Clay.

According to the author, Bridge of Clay has been a work-in-progress for over 10 years, but the idea for the story originally came to him when he was nineteen. Zusak told the New York Times that he struggled to find the right energy to carry the book over the years. ‘I could write this book until I die and it still won’t be the way I want it. But I think now it’s got the right heart and I think once you’ve got that then you’ve got an obligation to yourself to see it through and you hope people will find that in it.”

Bridge of Clay is due for publication in October this year. The Dunbar boys bring each other up in a house run by their own rules. A family of ramshackle tragedy - their mother is dead, their father has fled - they love and fight, and learn to reckon with the adult world. It is Clay, the quiet one, who will build a bridge; for his family, for his past, for his sins. He builds a bridge to transcend humanness. To survive. A miracle and nothing less. Winner of the Indie Book Award for Fiction 2019. Shortlisted for the ABIA Book of the Year Award 2019. Longlisted for the Dublin Literary Award 2020. It is 1939. Nazi Germany. The country is holding its breath. Death has never been busier, and will become busier still.By her brother's graveside, Liesel's life is changed when she picks up an object, partially hidden in the snow. It is The Gravedigger's Handbook, and it is her first act of book thievery.So begins a love affair with books and words, as Liesel learns to read. Soon she is stealing books from Nazi book-burnings, the mayor's wife's library, wherever there are books to be found.But these are dangerous times. When Liesel's foster family hides a Jewish fist-fighter in their basement, Liesel's world is both opened up, and closed down.Award-winning author Markus Zusak has given us one of the most enduring stories of our time. 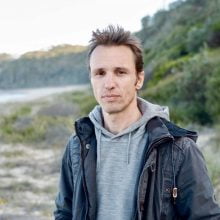 Markus Zusak is the international bestselling author of six novels, including The Book Thief and most recently, Bridge of Clay. His work is translated into more than forty languages, and has spent more than a decade on the New York Times bestseller list, establishing Zusak as one of the most successful authors to come out of Australia. All of Zusak's books - including earlier titles, The Underdog, Fighting Ruben Wolfe, When Dogs Cry (also titled Getting the Girl), The Messenger (or I am the Messenger) - have been awarded numerous honours around the world, ranging from literary prizes to readers choice awards to prizes voted on by booksellers. In 2013, The Book Thief was made into a major motion picture, and in 2018 was voted one of America's all-time favourite books, achieving 14th position on the PBS Great American Read. Also in 2018, Bridge of Clay was selected as a best book of the year in publications ranging from Entertainment Weekly to the Wall Street Journal. Markus Zusak grew up in Sydney, Australia, and still lives there with his wife and two children. 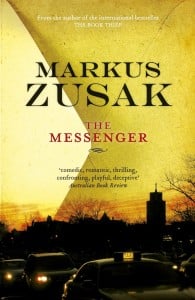 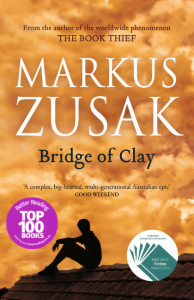