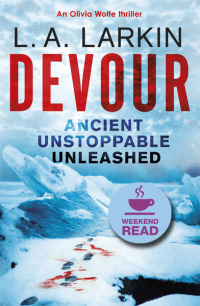 Looking for a great weekend read? The sort of book that can absorb you totally and transport you to another world; one that you’ll have no problem starting Friday night and finishing by Sunday – if not sooner? Devour, the cracking new thriller from L.A. Larkin is one such book and is the first to kick off our new series of Weekend Reads.

Devour is an intelligent and terrifying thriller, truly a page turner that seamlessly flits from the chill of Antarctica to the terrors of the Afghan war zone; from bio-laboratories in England, to a defence base in Nevada.

Olivia Wolfe is an unstoppable London journalist. With her own sad and deprived background, she is hell-bent on seeking the truth in all her stories. With no life other than her job, a brother in prison and many near-misses behind her, she cares little for her own safety – as long as she’s bringing justice to the fore.

The  editor at her newspaper is sick of her shenanigans though, and takes her off the Afghan job (her latest obsession) after she witnesses the brutal murder of one of her sources. He tells her she always gets too involved, and needs to stay emotionally removed. But Olivia’s not happy at being pushed to the ends of the earth in Antarctica – that is, until she finds out more.

The British scientific mission in Antarctica may be about to uncover prehistoric life forms lurking kilometres below the surface of a frozen underground lake. What they could find will be momentous – but that’s if the Russians don’t get there first. And there are some strange things happening at the base – why has someone died in mysterious circumstances? Is there a traitor in their midst or do the Russians have a plant?

Back in the UK with the ‘bacteria’, it’s soon apparent that what they have uncovered is bigger and potentially more dangerous – to the whole human race – than they ever could have imagined. But Olivia is now a wanted woman, accused of murder and being an accomplice with the Russian defector-turned-traitor Vitaly. As if that wasn’t enough there’s someone hacking her computer and stalking her. Her life is in grave danger and even with all her connections, surely she can’t keep getting away with it. Finally unravelling this mystery, she must make a heartrending decision about whether to save one life or millions of lives.

Devour is what we’ve come to expect from an action-packed thriller – once you start it you really can’t stop, making it perfect to ‘devour’ in a weekend. Olivia Wolfe is a new heroine – raw, feisty, damaged, yet likeable and realistically drawn (and based on the real-life American journalist Marie Colvin killed in Syria in 2012). We hope to see more of her – and luckily we will, given that this is the first in a new series from L.A. Larkin, who has most decisively joined the ranks of master thriller writers.

British-Australian thriller author, L.A. Larkin, has been likened to Michael Crichton and Matthew Reilly. The Genesis Flaw was nominated for four crime fiction awards and Thirst described as ‘the best Antarctic thriller since Ice Station’. An adventurer at heart, Larkin has spent time in the Antarctic, with scientists at the British Antarctic Survey and the Australian Antarctic Division. She lives in Sydney and London, and teaches mystery and thriller writing.

To purchase a copy, read an extract or find out more about Devour click here.