Why Are Adults Going Crazy for Colouring Books? We asked a clinical psychologist, a bookseller, and a librarian why adults are going wild about colouring books.

It’s not a new phenomenon – it’s been a craze in some countries for years, France in particular – but it’s been gaining momentum in Australia since the beginning of the year. Adults are buying so many colouring-in books that bookshops can’t keep up with the demand.

We have to admit it, it’s a craze we hadn’t taken much notice of at Better Reading – we’re all about the story – but we’ve just started publishing the Top Ten bestselling lists every week and when eight out of ten books in the Top Ten Bestselling Non-Fiction list were colouring books for the second week running, we had to take notice.

But none of us has much experience of colouring-in (well, not since we started wearing long pants) so we were finding it hard to explain the craze. “It’s like knitting isn’t it?” says Better Reading’s Director, Cheryl Akle. “I like the idea of art as therapy. But it’s not about story or reading, is it?”

So we decided to put it out there during an event we were attending in Orange – the fabulous Readers and Writers Festival, ‘Re-Imagining History’ – organised by Central West Libraries. There were bound to be people in the crowd, we reasoned, who would know something about colouring books.

It turned out our instincts were right because the crowd here were well ahead of us: they knew all about colouring books. Clinical psychologist from Orange, Christine Ireland, who also happens to be a poet and the daughter of three-time Miles Franklin winning novelist David Ireland (The Glass Canoe), told us that one reason for the popularity of colouring books is that many people find them preferable to learning mindfulness meditation.

Why is it mindful?

“It’s about doing something that you can really focus on,” says Ireland. “You have to pay attention to detail and mindfulness is an attentional skill like writing poetry, playing a musical instrument or reading a gripping novel.

“When you’re doing these activities, you’re in the present moment. Colouring-in is a non-confronting exercise and you’re totally immersed in the activity.

“Doing activities like this can promote calmness and reduce stress and might mean we react in a more measured way to events. Like breathing exercises, it’s very relaxing and non-judgemental.”

But the cynic in us couldn’t help wondering if it’s just a fly-by-night kind of a fad. Not so, thinks Margaret Schwebel, from Collins Booksellers Orange. She told us that colouring books have been hugely popular in France for the last five years, which makes sense given that many of the colouring books originate with French publisher, Hachette. According to this article in the UK Telegraph, colouring books sales have outstripped sales of cookbooks in France, and adult French women in particular, are driving those sales.

Schwebel also told us some fascinating local anecdotes about who is purchasing the books.

“Young girls get together and colour-in instead of going to the pub,” she said. Which of course has to beat wondering where your teenagers go at night. But it’s not just the younger age group who are buying them.

“Or a grandmother will come in to buy one for herself, her daughter and her granddaughter, so they go across all ages,” says Schwebel. “Mothers are colouring-in with their teenage daughters and they are all talking to each other while doing this activity. It’s less confronting talking to their parents like this; they can open up and talk more – like conversations while driving in a car.”

Jasmine Vidler of Central West libraries tells us that people are remembering how much they enjoyed colouring-in as a child and now that it’s in fashion, people can enjoy it again without feeling silly. “They can rediscover play and childhood, guilt-free,” she says. “It’s about having fun.”

According to Schwebel the craze really took off in Australia at the beginning of the year and is being driven by social media and people buying them for friends, and husbands buying for their wives.

With all this activity, she tells us that publishers are struggling to keep up with demand: “They’re being sold out so fast, they’re being reprinted. We’ve got them on back order all the time.”

In this article, Why Adults are Buying Colouring Books (for Themselves), published last week in The New Yorker, writer Adrienne Raphel suggests that colouring books are part of a wider trend among adults for “childhood objects and experiences.”

It’s described as the ‘Peter Pan’ market, a well-documented trend of adults reading children’s and young adult books, but also of stressed-out, over-worked adults seeking refuge and stress relief in children’s activities in general – such as escaping to camps where they can ‘switch off’ and have fun.

That sounds appealing so we decide to see for ourselves what all the fuss is about and head to Collins Booksellers to check out some colouring books. As we thought, they aren’t stories as such but many of the books are beautiful, intricate and yes, as Ireland pointed out, so detailed, we can imagine how colouring-in could be very relaxing. However, Cheryl decides to stick to her knitting and I get myself a copy of The Mindfulness Colouring Book. It’s not quite as pretty as The Secret Garden, but its compact size means it fits perfectly in my handbag, ideal for some emergency stress relief.

The Queen of Colouring Books: Johanna Basford at Work

Meditative: Colouring in has been compared to other relaxing practices, such as knitting 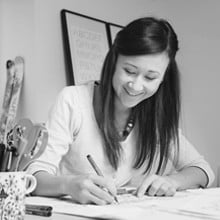 Johanna Basford is an illustrator and ink evangelist who prefers pens and pencils to pixels.She creates intricate, hand drawn illustrations predominately, although not exclusively, in black and white. Much of her work has roots in the flora and fauna that surrounded her growing up on a fish farm in rural Scotland.She graduated in 2005 from Duncan of Jordanstone College of Art and Design in Dundee with a degree in Printed Textiles and a portfolio stuffed with monochrome silk screen prints and drawings. Following that, she set up a little studio and began on her mission to vanquish the vector and champion the (wobbly) hand drawn line. 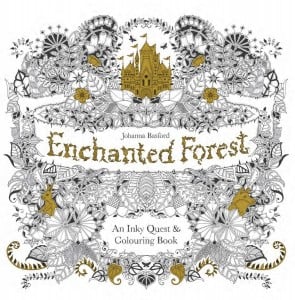 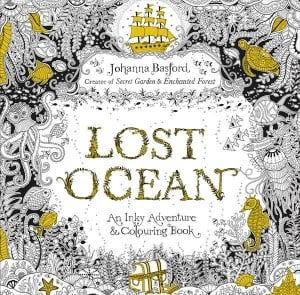 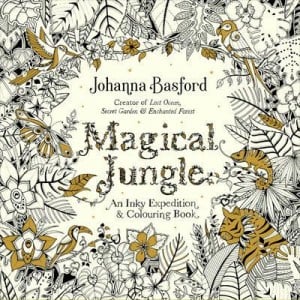