Stanley Huang’s miraculous good health has been something that’s always given him great comfort. As he’s grown old, numerous friends and acquaintances have succumbed to all manner of ailments, but Stanley’s luck has persisted. In fact, he feels lucky in more ways than one. After migrating from China, Stanley made his fortune in Silicon Valley, and now lives luxuriously with his second wife, Mary – amenable, doting, and 28 years younger. 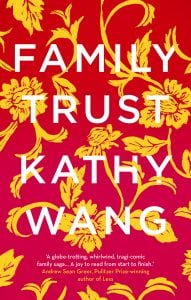 But one fateful day, not long after returning from a glamorous pleasure cruise in the Mediterranean, Stanley’s luck finally runs out in Family Trust. A routine health check takes an alarming turn, and soon Stanley is sitting with Mary in a sterile surgery being given the damning news: he has pancreatic cancer, and his chances of survival are slim.

After he recovers from the initial shock, Stanley sets about telling the rest of his family. There’s his son, Fred, a moderately successful venture capitalist who still dreams of making the big leagues like some of his old Harvard Business School friends, and his daughter, Kate, who’s juggling a difficult boss, two small children, and a husband working on a start-up that’ll make them filthy rich – or so he says. Then there’s Stanley’s first wife, Linda, who left after learning of his various extra-marital dalliances and has been understandably cool towards him since.

As the Huangs come to terms with Stanley’s diagnosis and approaching death, each member of the family must also deal with their own crises. Determined to finally establish himself as a high-flyer, Fred makes some questionable decisions that could put both his career and his personal life on the line, and after a chance encounter at the local playground one day, Kate realises something is terribly amiss with her marriage. Meanwhile, Linda has turned to online dating, but will men like her for who she is, or are they just after a nurse with a purse?

There’s also the issue of Stanley’s fortune. Who will benefit from it, and how much will each family member receive? While Stanley stays tight-lipped, his family begins to fear he has a lot less cash than they thought – and when you live in the richest town in America, that’s a big problem.

An outstanding debut from Kathy Wang, Family Trust is already generating plenty of buzz overseas, with the Washington Post naming it one of the most anticipated titles of the year. Told from the alternating perspectives of Stanley, Linda, Fred and Kate, the story zips along at a perfect pace, and the distinct and well-formed voices of each character make for a very engaging read. Although Wang doesn’t hesitate to highlight her characters’ flaws, Family Trust hits just the right balance of sharpness and tenderness, and by the end you’ll find yourself empathising with all members of the Huang family, despite their many shortcomings.

Beyond the compelling drama that plays out as the Huangs go to war over Stanley’s fortune and eventually discover what they truly value, Family Trust gives us a fascinating peek into the heady, high-powered world of Silicon Valley, and into the lives of its ridiculously wealthy inhabitants. Wang explores various clichés about the rich, revealing that while many ring true, others mask a reality that’s far more complex, and the unique challenges faced by the Huangs as Asian-Americans illustrate this complexity, powerfully: although they’ve reached the upper echelons of society, the Huangs are still not free from prejudice or the limits of cultural expectation.

A bitingly witty and deeply felt family drama that would make Jane Austen proud, Family Trust is a must-read for fans of Crazy Rich Asians, Everything I Never Told You, or, indeed (and we know it’s a big call), any Austen classic.

Definitely one to add to your wish list and wrap yourself around this Christmas. 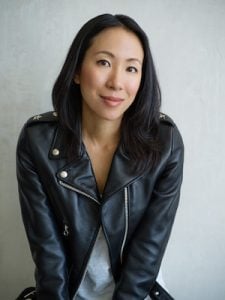 Kathy Wang grew up in the Bay Area of Northern California, and holds degrees from UC Berkeley and Harvard Business School. Family Trust is her first novel. 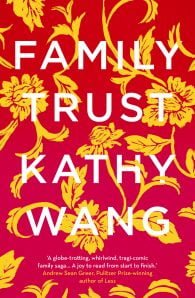 Some of us are more equal than others....Meet Stanley Huang: father, husband, ex-husband, man of unpredictable tastes and temper, aficionado of all-inclusive vacations and bargain luxury goods, newly diagnosed with pancreatic cancer. For years, Stanley has claimed that he’s worth a small fortune. But the time is now coming when the details of his estate will finally be revealed, and Stanley’s family is nervous.For his son Fred, the inheritance Stanley has long alluded to would soothe the pain caused by years of professional disappointment. By now, the Harvard Business School graduate had expected to be a financial tech god – not a minor investor at a middling corporate firm, where he isn’t even allowed to fly business class.Stanley’s daughter, Kate, is a middle manager with one of Silicon Valley’s most prestigious tech companies. She manages the capricious demands of her world-famous boss and the needs of her two young children all while supporting her would-be entrepreneur husband (just until his startup gets off the ground, which will surely be soon). But lately, Kate has been sensing something amiss; just because you say you have it all, it doesn’t mean that you actually do.Stanley’s second wife, Mary Zhu, twenty-eight years his junior, has devoted herself to making her husband comfortable in every way—rubbing his feet, cooking his favorite dishes, massaging his ego.  But lately, her commitment has waned; caring for a dying old man is far more difficult than she expected.Linda Liang, Stanley’s first wife, knows her ex better than anyone. She worked hard for decades to ensure their financial security, and is determined to see her children get their due. Single for nearly a decade, she might finally be ready for some romantic companionship. But where does a seventy-two year old Chinese woman in California go to find an appropriate boyfriend?As Stanley’s death approaches, the Huangs are faced with unexpected challenges that upend them and eventually lead them to discover what they most value. A compelling tale of cultural expectations, career ambitions and our relationships with the people who know us best, Family Trust skewers the ambition and desires that drive Silicon Valley and draws a sharply loving portrait of modern American family life. 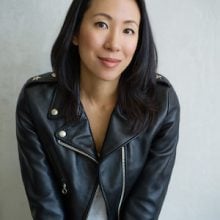 Kathy Wang grew up in Northern California and holds degrees from UC Berkeley and Harvard Business School. She lives in the Bay Area with her husband and two children.