Podcast: To Celebrate the 30 Year Anniversary of The Power of One, Christine Courtenay Discusses her Late Husband Bryce’s Legacy Christine Courtenay talks to Cheryl Akle about her late husband, bestselling author Bryce Courtenay, his writing, his incredible legacy and the 30-year anniversary of his novel, The Power of One.

Christine Courtenay grew up on a cattle property in North Eastern Victoria. After university, Christine’s passion for travel led her to co-found Australian Himalayan Expeditions (now World Expeditions), a pioneering trekking and adventure travel company. Christine then established her own travel consultancy, Go Wild, and in 2003, she became a founding director of the Australian Himalayan Foundation, an NGO dedicated to health, education and environment projects in the Himalayas.

Christine married beloved Australian author Bryce Courtenay in 2011, and today continues to champion her late husband’s amazing literary legacy. This year marks the 30th anniversary of Bryce’s most famous novel, The Power of One, and in this podcast Christine talks about its enduring impact and ongoing relevance. 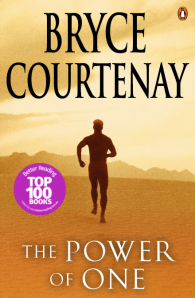