A Passionately Uplifting Memoir: Read an Extract from Ronni Kahn’s A Repurposed Life I may as well set the record straight right from the get-go that my name really is just Ronni. Not Veronica. Not Rhonda. Not Rona. And not Ronnie with an ‘e’. It’s not hidden inside any other name. After my two older sisters, my father had wanted a boy very badly. Ronni was the name he had chosen for that boy, and when I was born, the name Ronni remained. I liked it. I felt interesting. But it confused people too. Growing up, I always had the sense that my name challenged people somehow, because a girl was standing in front of them, not a boy. In my early business life, people often sounded a little taken aback when I was the voice behind the name Ronni Kahn. They were expecting to find the expertise of a respectable man whose full name, perhaps, was Ronald. (Or an Indian prince called Raj Khan!)

Despite me being an unexpected third daughter, my parents adored me, as did my sisters, Pamela and Margie. Being ten years younger than Pam and five years younger than Margie, I was the spoilt baby of the household and, I like to think, my father’s favourite. (Sorry, sisters!) Even then, I had a sense that I had him wrapped around my little finger. Maybe because I was the baby, he spoiled me more than he did my sisters. He’d often get in trouble from my mother for indulging me with chocolate bars and other treats. He used to lovingly call me his feigele, which means ‘little bird’ in Yiddish. My parents had grown up in small villages in South Africa that spoke English and Afrikaans, the two official languages of the South Africa of my childhood. But their parents were European immigrants who spoke to them in Yiddish, so we grew up speaking English, with Yiddish words smattered throughout. We all learnt Afrikaans at school, because it was compulsory, but I never connected with that language.

I don’t know whether there is any correlation with my boyish name, but I was instantly a tomboy. Maybe I wanted to play this out for my dad in some way, to try to live up to my idea of the name. He certainly went all out to provide me with the stereotypical boy things of the time. He would build go-carts out of soapboxes for me and the neighbourhood boys. This was not what the other little girls on our street were doing. I had so many smashes and crashes. I broke my arm and scraped myself continually, climbing trees with the boys. I’d pee standing up in the hydrangea bushes, because that’s what the boys were doing. The tomboy thing really worked for me; I had so much fun.

But when night-time came around, it wasn’t so much fun. I was so afraid of the darkness in my room that, even now, just thinking about it, I can feel the fear in my body. To deal with this crippling fear, my father gave me his wooden walking stick to put beside my bed. That stick really helped. If I had bad thoughts, I could always ‘touch wood’. It worked. The smooth smell of the wood, the feeling of my father’s strength; for a few seconds or minutes at least, they made everything okay. I know it’s a common thing for kids to be afraid of the dark, nothing unusual there. But I tell this story because I think there is something a little sinister in this memory. This stick was also there in case I needed to use it. It was a real weapon, one that a small child could use against a genuine threat. Outside my window, on my street, in my suburb and in my country, things were pretty ruthless. Every night, I was prepared, with my whole mind, to use that stick. This was life under apartheid in South Africa. Ronni Kahn's A Repurposed Life is a Fabulous Memoir about a Life Well Lived. Podcast: Ronni Kahn on Growing up in South Africa and Finding her Ambition 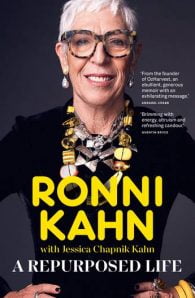 Life throws us mysterious ingredients. If we are brave enough to put the recipe aside and experiment, it's right there that things get interesting. As the owner of a successful events company, throwing away huge volumes of leftover food at the end of the day came with the territory. But when Ronni Kahn hit midlife, she found herself no longer able to turn a blind eye to her food waste problem. Hand delivering the untouched food to homeless shelters around Sydney became her renegade solution. Little did she know that fixing her small problem at work would lead her to unlock a hidden purpose at the very core of her inner life.Now founder and CEO of the food rescue organisation OzHarvest, Ronni leads hundreds of staff and thousands of volunteers with the goal to nourish Australia. She serves in an advisory capacity to government and is an instrumental leader in changing federal laws to improve social justice and environmental policies.A Repurposed Life is the story of how Ronni found her voice, her heart and her deepest calling. From her early years growing up under the brutal system of apartheid South Africa, to a socialist commune in Israel, Ronni finally settled in Australia to discover a profound new way of living. Shared with the humour, warmth and energy that have made her an internationally renowned keynote speaker, this heartfelt exploration of the choices that define us will speak to anyone seeking a more passionate expression of being alive.

Ronni Kahn is a South-African-born Australian social entrepreneur and founder of the food rescue charity OzHarvest. She is an advocate, lobbyist and activist renowned for disrupting the food waste landscape in Australia. She appears regularly in national media, serves in an advisory capacity to government and is a keynote speaker all over the world. Her mission towards sustainable action is supported through close collaborations with some of the world's finest chefs, including Jamie Oliver, Massimo Bottura, Neil Perry and Bill Granger. Ronni is an Officer of the Order of Australia (AO) and was named Australian Local Hero of the Year in 2010. In 2018, her journey became the subject of a feature film, Food Fighter, directed by Dan Goldberg. 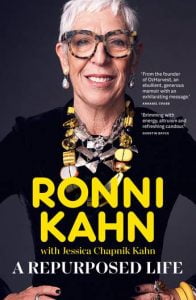