A Richly Woven Tale: Read an Extract From Tea Cooper’s The Cartographer’s Secret Lettie lay on her bed, eyes focused on the ceiling rose waiting for her breathing to settle and the sweat to dry on her skin. She knew, down to the last second, how long it would take to rid herself of the flickering images.

No matter what the papers described, no matter what the eyewitness reports and the scientific evidence suggested, the result was conclusive. A careless cigarette and her brother was no more.

She reached for her sketchbook and flicked through the pages to the last drawing she’d made: Thorne at the stern of the boat, his boater at a rakish angle and his smile blazing in competition with the noonday sun. If only she’d done as she’d promised, and hadn’t agreed to the ridiculous photograph to commemorate the insignificant achievements of the Women’s Club.

Perhaps if she’d made it to the wharf in time, Thorne wouldn’t have lit the cigarette. She could imagine his impatience. She’d berated him hundreds of times for smoking in the boat—they both knew the dangers of a naked flame with the engine primed.

They’d dreamt of shared adventures and exploration, made so many plans. The largest of them sat mocking her in the old stables behind the row of terraces on Macquarie Street. Their future, their escape. And now, she couldn’t bring herself to lift the dust sheets covering the Model T Ford. She might as well lie buried beneath them; better still, buried with Thorne beneath the open-armed angel in Waverley Cemetery.

‘Letitia! I wish to speak to you.’ 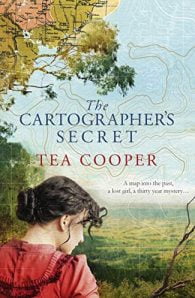 A young woman's quest to heal a family rift entangles her in one of Australia's greatest historical puzzles when an intricately illustrated map offers a clue to the fate of a long-lost girl. A mesmerising historical mystery set in the Hunter Valley from bestselling author Tea Cooper for readers of Natasha Lester and Kate Morton. 1880 The Hunter Valley Evie Ludgrove loves to map the landscape around her home - hardly surprising since she grew up in the shadow of her father's obsession with the great Australian explorer Dr Ludwig Leichhardt. So when an advertisement appears in The Bulletin magazine offering a one thousand pound reward for proof of where Leichhardt met his fate, Evie is determined to figure it out - after all, there are clues in her father's papers and in the archives of The Royal Geographical Society. But when Evie sets out to prove her theory she vanishes without a trace, leaving behind a mystery that taints everyone's lives for 30 years. 1911 When Letitia Rawlings arrives at the family estate in her Model T Ford, her purpose is to inform her Great Aunt Olivia of a bereavement. But Letitia is also escaping her own problems - her brother's sudden death, her mother's scheming and her own dissatisfaction with the life planned out for her. So when Letitia discovers a beautifully illustrated map that might hold a clue to the fate of her missing aunt, Evie Ludgrove, her curiosity is aroused and she sets out to discover the truth of Evie's disappearance. But all is not as it seems at Yellow Rock estate and as events unfold, Letitia begins to realise that solving the mystery of her family's past could offer as much peril as redemption.