‘Couldn’t she just be injured?’ Faye said.
She looked down at the table, unable to meet their gaze. A brief moment of hesitation. Then a sympathetic voice. ‘There’s an awful lot of blood. From such a small body.

But I don’t want to speculate until a medical officer has made an evaluation.’

Faye nodded. Someone gave her a transparent plastic mug of water, she was shaking so much as she raised it to her lips that a few drops ran down her chin and dripped onto her blouse. The blonde policewoman with the kind blue eyes leaned forward and gave her a tissue to dry herself with.

She wiped herself slowly. The water was going to leave nasty blotches on the silk blouse. Not that it mattered any more.

The female police officer glanced at her colleague, then shook her head. She chose her words carefully:

‘Like I said, a doctor needs to reach a verdict based on the evidence at the crime scene. But as things stand, everything points towards the same explanation: that your ex-husband Jack has killed your daughter.’

Faye closed her eyes and stifled a sob. The Gilded Cage by Camilla Lackberg: Your Preview Verdict Camilla Lackberg, Author of The Gilded Cage Explains why Creativity is a Blessing Trapped in a Perfect Life: Review of The Gilded Cage by Camilla Lackberg 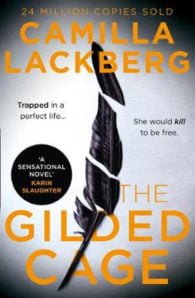 A gripping new psychological thriller from No. 1 international bestseller and Swedish crime sensation Camilla Lackberg‘A sexy, sensational novel with intoxicating vengeance and an unexpected tenderness' Karin SlaughterAll that glitters…People would kill to have Faye Adelheim's life. She lives in an ultra-swanky apartment in the most exclusive area of Stockholm, she has a gorgeous husband who gives her everything she's ever wanted, and she has an adorable daughter who lights up her world. Faye's life is perfect.So how is it, then, that she now finds herself in a police station?The truth is that Faye's life is far from what it seems. The truth is that Faye isn't even her real name. And now she's been caught out. There's no way she's going to go down without a fight. The only question is – who will escape with their life?

Camilla Läckberg worked as an economist in Stockholm until a course in creative writing triggered a drastic career change. She is now one of the most profitable native authors in Swedish history. Her novels have sold worldwide in thirty-five countries. She lives with her husband and children in a quaint suburb of Stockholm.