Saving Missy by Beth Morrey is Both Heartbreaking and Heart-Warming Millicent Carmichael is prickly, stubborn and set in her ways. Her life has become small. And she’s also terribly lonely. She is grieving for family she has lost or lost touch with. One child lives across the world, taking Missy’s only grandchild with them. Her other child lives significantly closer, but a terrible argument has caused a rift that neither can breach. And the memories of her dear Leo often resurface and hurt every time. She is alone, in a large empty house in London, and spends her days trying to find things to do so she can email her distant child with news so he doesn’t worry too much.

Spiky and defensive, Missy knows that her loneliness is all her own fault. She deserves no more than this; not after what she’s done. But when she has a minor mishap in a public park, her life is going to change. Brought into her life are two very different women, one small child, one man and many dogs. This cast of loveable and completely relatable characters have the chance to show Missy the life she’s been missing out on. Missy isn’t sure she’s ready to take on new friends, a new dog and especially a chance at a new life. Can she heal old hurts and start anew? Seventy-nine is too late for a second chance. Isn’t it?

Saving Missy is both heartbreaking and heart-warming. It will make you laugh and cry at the same time as Missy goes through the later years of her life and tries to rekindle her passion for life itself. It brings to forefront the very real issue of loneliness that plagues many of the older generation today and shows how perfect strangers can influence you for the better. You feel Missy’s pain as she struggles with her loneliness, but also feel her joy when she is with her new-found friends.

Saving Missy is a beautiful tale of friendship, love, loss, memory and heartbreak. Told from Missy’s point of view, but going back in flashbacks, you get to learn of her past and why Missy is the way she is. Beth Morrey has done a completely wonderful job of crafting her characters to be absolutely real. You know a real-life Missy, Sylvie and Angela. You’ve seen them in a coffee shop, sat next to them on a train. You may even be friends with one, or be one yourself. These are universal characters that are so easy to fall in love with, despite their flaws. If you read one book this year, make it Saving Missy. Because everyone deserves a second chance at life – no matter their age. I Wanted to see my Name on a Spine in a Bookshop: Q&A with Saving Missy Author, Beth Morrey Beth Morrey's Saving Missy is a Beautiful Tale of Friendship, Love and Loss 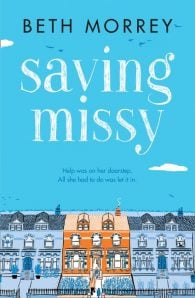 Prickly. Stubborn. Terribly lonely. But everyone deserves a second chance…A dazzling debut for 2020 – are you ready to meet Missy Carmichael?Missy Carmichael’s life has become small.Grieving for a family she has lost or lost touch with, she’s haunted by the echoes of her footsteps in her empty home; the sound of the radio in the dark; the tick-tick-tick of the watching clock.Spiky and defensive, Missy knows that her loneliness is all her own fault. She deserves no more than this; not after what she’s done. But a chance encounter in the park with two very different women opens the door to something new.Another life beckons for Missy, if only she can be brave enough to grasp the opportunity. But seventy-nine is too late for a second chance. Isn’t it?’Bittersweet, tender, thoughtful and uplifting … I loved it’ Nina Stibbe

Beth Morrey was inspired to write her debut novel, Saving Missy, while pushing a pram around her local park during maternity leave. Getting to know the community of dog owners, joggers, neighbours and families, she began to sow the seeds of a novel about a woman saved by the people around her, strangers who became friends. Previously Creative Director at RDF Television, Beth now writes full time. She was previously shortlisted for the Grazia-Orange First Chapter award, and had her work published in the Cambridge and Oxford May Anthologies while at university. Beth lives in London with her husband, two sons and a dog named Polly. 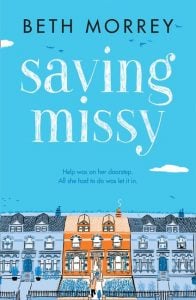