The Latest Reacher Novel, For Fans and New Readers Alike: Read a Review of Blue Moon by Lee Child Once in a blue moon, things turn out just right: the new Jack Reacher, the thriller hero we can’t get enough of is back in a brand new white-knuckle read from Lee Child. I’m embarrassed to admit that while this is Lee Childs’ 24th Jack Reacher novel, it’s my first. I was concerned that I’d need to be familiar with the series to write this review. I’ve seen a film and went back and looked at the history of this iconic character, however I needn’t’ve worried. Blue Moon reads as a standalone.

Blue Moon is set in a nameless city where two ruthless rival criminal gangs, one Albanian, the other Ukrainian, are competing for control. But they hadn’t counted on Jack Reacher arriving on their patch.

Reacher is trained to notice things. He’s on a Greyhound bus, watching an elderly man sleeping in his seat, with a fat envelope of cash hanging out of his pocket. Another passenger is watching too … obviously hoping to get rich quick.

As the mugger makes his move, Reacher steps in. The old man, Aaron Shevich is grateful, yet vulnerable, scared, and clearly in big, big trouble. Reacher plays the good Samaritan and escorts Aaron home, where he meets Aaron’s wife, Maria. He learns that the elderly couple are in serious financial trouble after borrowing money to pay for some medical treatment. The gangs have a tight hold on the old guy. Will Reacher sit back and let bad things happen? Or can he twist the situation to everyone’s benefit?

Lee Child has delivered an exhilarating read. It’s fast-paced, a fantastic page-turner that is perfectly plotted.

What grabbed me from the get-go is Child’s finely polished dialogue that propels the story forward. The novel can be violent in parts but with Reacher’s characterisation it also has an old-school Hollywood feel to it. Physically, in my imagination, he was no Tom Cruise. The Reacher in this book is dark, and yet someone you’d trust. He wanders the country, assisting where he can. In this book it’s the Shevichs. The odds are better with Reacher involved. That’s for damn sure.

‘This is a random universe,’ he says. ‘Once in a blue moon things turn out just right.’

If you’re a Reacher fan you’ll love this latest instalment. If you’re new to the series like I am, you’ll be putting the backlist onto your TBR pile.

Lee Child is one of the world’s leading thriller writers. He was born in Coventry, raised in Birmingham, and now lives in New York. It is said one of his 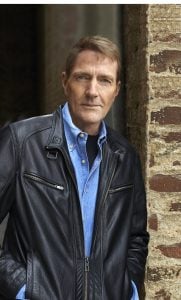 novels featuring his hero Jack Reacher is sold somewhere in the world every nine seconds. His books consistently achieve the number-one slot on bestseller lists around the world and have sold over one hundred million copies. Two blockbusting Jack Reacher movies have been made so far. He is the recipient of many awards, most recently the CWA’s Diamond Dagger for a writer of an outstanding body of crime fiction, the International Thriller Writers’ ThrillerMaster, and the Theakstons Old Peculier Outstanding Contribution to Crime Fiction Award. An Exhilarating Read: Extract From Blue Moon by Lee Child 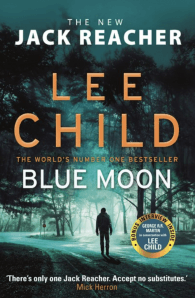 Reacher sits in the back of a Greyhound bus watching an old man asleep in his seat, a fat envelope of money about to slip from his pocket. Reacher's also watching a guy who would like to get his hands on that money. Ain't gonna happen. The old man is grateful and thanks Reacher but turns down Reacher's offer to help him home. Huh? He's vulnerable, frightened, and clearly in big trouble.Coincidentally (or is it? - it's a Reacher novel, after all), this city has a gang problem. The Albanians vs. Ukrainians. Is that why the man is so scared? Will Reacher sit back and let bad things happen? Or can he twist the situation to everyone's benefit?"This is a random universe," he says. "Once in a blue moon things turn out just right."

Lee Child is one of the world's leading thriller writers. His novels consistently achieve the number one slot in hardback and paperback on bestsellers lists on both sides of the Atlantic, and are translated into over forty languages. All have been optioned for major motion pictures, the first of which, Jack Reacher, was based on the novel One Shot. He was awarded the Crime Writers Association Diamond Dagger in 2013. Born in Coventry, he now lives in America.