Our latest Preview title is Baby, by Annaleese Jochems – a sunburnt psychological thriller of obsession and escape by one of the most exciting new voices in New Zealand fiction. Preview reviewers have described the book as tautly written, compelling, and thrilling. Take a look at some stand-out reviews:

‘It took me a few chapters to get into the rhythm of this book. At first I wasn’t sure whether I liked it or not, but as I read further I found the story quite enthralling. The story is told from the entitled and self-centered perspective of 21 year old Cynthia who runs away with her fitness instructor Anahera and buys a boat called Baby. Once upon Baby, the story is propelled forward by the introduction of a male character that changes the dynamics of the storyline. While it did take a bit to be drawn in by the story, by the last page I was a very satisfied reader.’ – Jessie, VIC

‘For a debut book this is really well written. This psychological thriller will get readers thinking. Cynthia and Anahera are a couple, or maybe couple, trying to escape from their own reality. Readers might find this book a tad disturbing and uncomfortable; I personally think this was the intention of the author.’ – Deborah, NSW

‘Reality TV loving Cynthia, her dog Snot-head, and her fitness instructor Anahera (whom she has a crush on) steal money from her father to buy a boat named Baby, and live moored in the Bay of Islands, on the North Island of New Zealand. Here Cynthia hopes they will live in bliss but with a seasick dog, a lack of money, an incident on a nearby island and the coincidental arrival of a German backpacker by the name of Gordon, her hopes of love seem shot to bits. Cynthia’s jealousy grows as Gordon becomes closer to Anahera. Baby is a story of jealousy and obsession told in an atmosphere of damp, oppressive closeness. Baby seems ever smaller as the three of them navigate each other and the space remaining. I may not approve of self-centred Cynthia but was drawn into her obsessive world, whether I liked it or not.’ – Daniella, QLD

‘Baby is not the type of book I would normally pick up, however I found it both thought provoking and confronting. The imagery is jarring and uncomfortable, and creates an edgy suspense made all the more startling by descriptions of the mundane. Would recommend this book for fans of psychological suspense.’ Alanna, QLD

Purchase a copy of Baby here 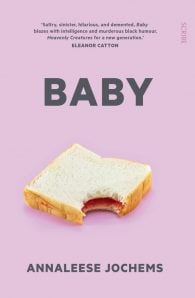 ‘Cynthia can understand how Anahera feels just by looking at her body.’Cynthia is twenty-one, bored, and desperately waiting for something big to happen. Her striking fitness instructor, Anahera, is ready to throw in the towel on her job and marriage. With stolen money and a dog in tow they run away and buy ‘Baby’, an old boat docked in a beautiful bay, where Cynthia dreams they will live in a state of love. But strange events on an empty island turn their life together in a different direction.Baby is a sunburnt psychological thriller of obsession and escape by one of the most exciting new voices in New Zealand fiction. 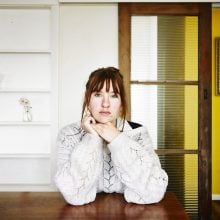 Annaleese Jochems was born in 1994 and grew up in Northland. She won the 2016 Adam Prize from the International Institute of Modern Letters and the 2018 Hubert Church Best First Book Award for Fiction for Baby, which is her first book. 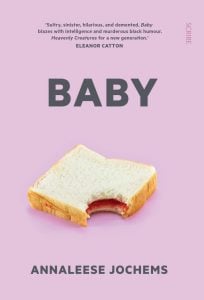