Red Can Origami by Madelaine Dickie: Your Preview Verdict 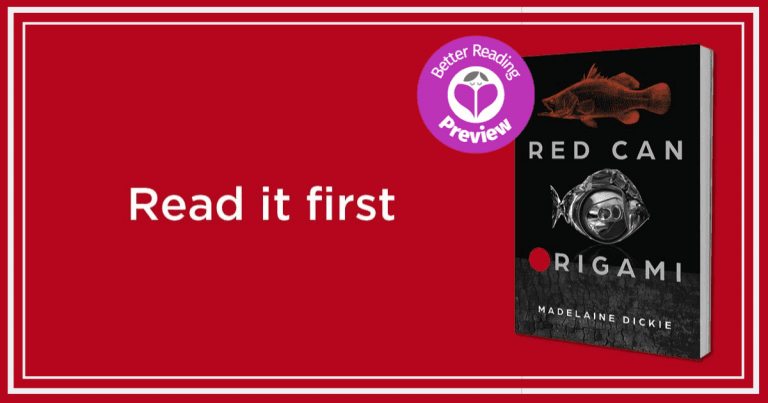 Red Can Origami by Madelaine Dickie is a story about Ava. She has just landed a job as a reporter in Gubinge, a tiny tropical town in Australia’s north. Ava is hooked on the thrill of going hand-to-hand with barramundi, awed by country, and stunned by pindan sunsets. But a bitter collision between a native title group and a Japanese-owned uranium mining company is ripping the community in half.

What an incredible story really thought I was in the outback with Ava, this book is totally believable as we do have conflict between our traditional owners and the mining companies I think all Australians should read this book – Deborah, NSW, 5 stars

A freshing Australian story that is set in Gubinge with Ava as the main protagonist. Whilst I found the reading of the book challenging by not using “” to indicate talking, the overall story drew me in and kept me hooked. So great to see an Australian story that is not stereotypical and incorporates both Wester lifestyle and Aboriginal culture. Madeleine is an inspirational story teller and hope there is more to come from her! – Katarzyna, VIC, 5 stars

Red Can Origami was one the best books I have read for a while. The struggle to do whats morally right and good for the country and the local people set against the harsh landscape of Gubinge was a riveting read that i thoroughly enjoyed. – Rachel, QLD, 5 stars

Such an incredible read. I thoroughly enjoyed this novel. I am an avid reader of any australian author. This one certainly did not disappoint. A must for anyone who loves a cultural based storyline – Aleisha, QLD, 4 stars

Dickie inserts her protagonist, a journalist, into a semi-isolated town where the surface is all about fishing and drinking and cattle, while below the surface, tensions seethe about land rights and mining. if the reader can get past the second-person narrative and forgive the lack of quote marks for speech, then this sometimes dark and gritty tale is a powerful, brilliantly topical and thought-provoking read. – Marianne, NSW, 5 stars

In Red Can Origami, Madelaine Dickie has delivered an important story that is full of beauty, tension and emotion. The book is short at 218 pages but every word is well considered and there is no flowery prose or extravagant use of adjectives. The sense of place is highly developed and the characters are strong and well drawn. The language of the writing is so lyrical that it grabbed me from the first paragraph and took me on a ride through country. Ava is a city journalist who accepts a job on a local paper in a small town in northern WA. She consequently becomes embroiled in the conflict between different stake holders when a Japanese owned uranium mining company wants to mine sacred Burrika country. I loved this book and the way that Madelaine tells an age old story in such a modern and relevant manner. – Janelle, NSW, 5 stars

I Loved my time reading and escaping into RED CAN ORIGAMI and was sorry that it was not a nice thick book that lasted longer.   Beautifully written, poetic fascinating subject. I am familiar with the area and really felt that I was there so well did Madelaine manage to capture the feeling and atmosphere.   An interesting style of narrative which really spoke to me.  A lovely way to escape busy city life and experience our country. You will love Ava’s journey and you will be tested with your thoughts and emotions on an extremely relevant subject.  Thank you Better Reading and Madelaine Dickie – Debbie, VIC, 4 stars

A well written book that pulled at heartstrings and made me angry at how we treat each other as humans. A hard read, the tension and racism in the community and then between the mining company and the owners of the land. This all made the characters real and relatable and I was invested in them and their relationships. I really liked this one. – Hanadi, NSW, 4 stars

Such strong characters in this book was interesting to read about them. Lovely backgrounds mentioned throughout made you feel as if you were there with them. The cultural differences were so well written and how some people over look other people if they are different. I read this in two nights as I needed to see what happened to the characters. Had some sad moments and happy one. Worth a read for anyone. – Beth, TAS, 4 stars

Red Can Origami is an immersive read that propels you straight into the heart of Northern Australia and the conflict between the traditional owners of the land and the Japanese mining conglomerate that are trying to establish a mining base on sacred land. Dickie writes in such a refreshing way that you feel you are trailing along with Ava as she goes about her new life, you can feel her emotional head space through the pages and sympathise with the predicament she is in. While the writing style of the book took a while to get used to, it helped add to the story telling element of the book. After reading I felt like packing up and heading north for a month or so. – Mel, NSW, 5 stars

Barramundi fishing and beer drinking are the common pastimes in Gubinge, a town in the Kimberley region of Western Australia. Idealistic journalist Ava Kelly has moved there from Melbourne to work for the local newspaper. Fishing with friends in an area close to rock art and waterfalls, she wanders to find a croc-free swimming hole only to encounter a bulldozer and hundreds of churned up splinters of bone. She is hobbled in reporting this desecration of Lalinjura, the site of a massacre of indigenous women and children, by the editor. His concern is for the paper’s revenue from it’s biggest advertiser Gerro Blue, a Japanese-owned uranium mining company, and not their lack of an exploration permit. Ava is introduced to country and Burrika culture and begins to relate to place rather than the built environment. She also begins relating to Noah, an influential Burrika boss. ***Redacted due to potential spoilers*** Madelaine Dickie’s title and cover art are cleverly symbolic of the crushing impact of Japanese mining interests on the culture and environment. Red Can Origami is a emotively told tale that also educates with great respect. – Anita, QLD, 5 stars

Loved, loved, loved reading Red Can Origami. Thankyou Madeline Dickie for writing a book that describes our backyard so beautifully. I now feel like packing my bags and moving up to the North Coast of Australia and live in a rural town like Gubinge. The description of the desert and river landscapes, fishing for barramundi and other fish, beautiful sunsets, night crabbing, drinking with mates (ok I wouldn’t personally drink as much), camping in the middle of nowhere….. Why wouldn’t you want to move there. I loved how the narrative voice as you were reading was in the second person point of view. It made it easy to read and got you hooked. Ava was a likeable character that goes to Gubinge a small rural town up north of Australia on the west coast as a journalist for a small local paper. She happens to stumble across a disturbed massacre site. She realises she is onto a big story because she also finds a Grecco Blue vehicle, a Japanese owned uranium mining company vehicle that has done this. I also, loved learning about Noah, his family and the Burrika mob (nation). The conflicts between family law within their culture and just basically about their culture and how important my country is. I think this is a great book that everyone should read to learn about my country, our many nations culture of Australia and the impact mining does to our world. I think it is also a great book to introduce in school for learning. A variety of topics are bought up with what aboriginal people of Australia are facing that we need to learn about and be aware. The tension between the white population, dilemmas they face in respect to mining and what rights does native land title means. While also the impact open-cut uranium mining does to our land. Not only has Madeline Dickie written a great book but a window to our nations my country culture. – Maria, SA, 5 stars

An incredible read. Dickie’s manner of writing pulls in the reader ensuring they feel part of the story. Dickie dipicts the tough subject of racism in a courteous yet raw storyline. Credit to Dickie! – Heidi, NSW, 4 stars

I really enjoyed it. I didn’t know anything at all about, it what to expect..so I really enjoyed it. Really human characters. Really topical themes; indigenous land rights, the important of land to the first Australians. The role of mining in a community. I loved exploring all of them in such a little weighty book. I found it told beautifully, but I can see the lack of grammar and style will make it hard for some people to read, but not me!! – Anna, NSW, 4 stars

A thought provoking book that i found absorbed me into the story. A rare insight into an outback community divided with the imminient arrival of a Japanese uranium mining company proposing to mine on sacred land. Ava leaves the big city to take up a job on the local newspaper which faces her with many challenges, one of them being forming a special friendship with a prominent local Noah. This book educated me on the challenges faced in certain rural communities where wanting to protect land while fighting off a mining giant who at the same time can save the town from financial ruin. Ava becomes stuck smack bang in the middle of the debacle which places her in near impossible circumstances. How she navigates the challenges makes for a thought provoking read and an ending that keeps you entwined in the book even once put down. – Jude, SA, 5 stars 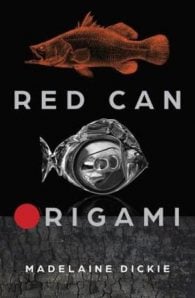 Ava has just landed a job as a reporter in Gubinge, a tiny tropical town in Australia's north.Gubinge has a way of getting under the skin. Ava is hooked on the thrill of going hand-to-hand with barramundi, awed by country, and stunned by pindan sunsets. But a bitter collision between a native title group and a Japanese-owned uranium mining company is ripping the community in half.From the rodeos and fishing holes of northern Australia, to the dazzling streets of night-time Tokyo, Ava is swept in pursuit of the story. Will Gerro Blue destroy Burrika country? Or will a uranium mine lift its people from poverty? And can Ava hold on to her principles if she gives in to her desire for Noah, the local Burrika boss?

Madelaine Dickie studied Creative Arts and Journalism at the University of Wollongong. In 2011 she received a Prime Minister's Australia Asia Endeavour Award to move to West Java, Indonesia, and complete her first novel. As part of this award, she worked with mentors at Universitas Padjadjaran and Universitas Islam Bandung.Her writing has appeared in numerous publications including GriffithREVIEW (2013), the American journal Creative Nonfiction (2012) and Hecate (2010). Her radio stories have been broadcast on Radio National and she also writes and rides for the surfboard company Treehouse Landscapes and Handshapes 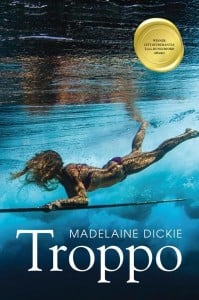 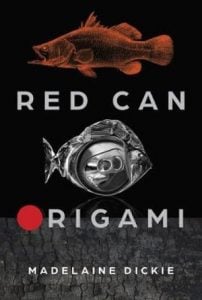