Q&A with B. Michael Radburn, Author of The Reach Although The Reach is the 3rd novel in my Taylor Bridges series, the book holds its own as a stand-alone story and makes a great launch point for anyone dipping into the series for the first time. Set in the hauntingly secluded backwaters of the Hawkesbury River, 3 bodies are found in the derelict hulk of a buried riverboat, thus setting the scene for an intriguing tale of murder. The case detective enlists Taylor, a Parks Ranger with a history of assisting police with such wilderness forensics in the past, setting the way for a twisting tale of quirky characters and long-buried secrets written deep in the history of this river town of Devlins Reach.

I love hidden places and remember reading about the buried ships and boats in the reclaimed land of San Francisco after the gold rush, and I knew I had to use something similar in a local setting. The upper Hawksbury region was the perfect location and formed the genesis of The Reach. Also the history of the place, from 1st Fleet settlers and beyond to the Indigenous first nation people who had lived harmoniously with the land since the first sunrise. It’s just haunting.

I like to have several projects on my desk at any one time, dipping in and out over the course of the day. I find my creative juices flow better in the mornings, so like to conduct my manuscript writing straight after breakfast. Research and synopsis work will follow, then correspondence and marketing in the evenings. Writer’s block is rare, but when it does occur I usually jump on my Harley Davidson and take a ride somewhere around the Southern Highlands near my farm. It may not fix the problem, but who cares, I got to ride my Harley.

My current project is a book entitled Barren Grounds, set back in 1964 where a string of serial killings takes place by someone who identifies as The Jeweller. Think of Fight Club meets Shutter Island and you’ll get the picture.

I’ve never had a problem finding ideas, and I love writing, so that’s the easy part. I do struggle with editing, however, not because of my ego, but because I’m usually well into the next novel by the time the editing process comes round and so resent having to drop it and get my headspace back into the previous one (1st World problem, I know). I recognise how important editing is though, and am blessed to have a publisher in Pantera Press who still invest in the process. I’m doubly blessed to have such a talented editor in Lucy Bell who gets me.

I crossed paths with Stephen King in Canada back in the mid-1980s who advised that I should never underestimate my readers and that less is more when it comes to building tension in a book. Set the seeds carefully and let the reader’s imagination do the work. The Reach by B. Michael Radburn is Rural Crime at its Finest 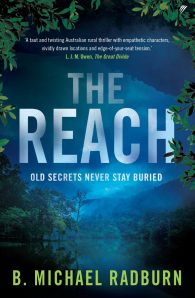 An isolated town with a dark past. In secluded Devlins Reach, on the shores of the Hawkesbury River, three bodies are unearthed in an excavation site. When a wilderness expert, Park Ranger Taylor Bridges, is called in to assist local police, he soon discovers the town has an unsettling history – one to match Taylor’s own haunted past. But the quiet location and picturesque beauty of The Reach are hiding something darker than Taylor could have anticipated. Within the town’s tight-knit community of loggers, store owners and tight-lipped locals, someone is targeting the residents one by one. As a torrential storm surges ever closer, and the river swells at the levee walls, The Reach goes into lockdown. With no way in or out, Taylor finds himself in a race against the power of nature to find a desperate killer before the whole town goes under.

B. Michael Radburn lives with his family in the beautiful Southern Highlands of NSW. In his spare time Radburn enjoys farming his small property and taking road trips on his Harley Davidson. Aside, of course, from writing, he possesses a deep passion for music and treasures the time he spends with his guitar, banjo and harmonica.Radburn has been writing successfully for many years, having published more than 80 short stores, articles and reviews in Australia and overseas.Through the late '80s he was Publishing Editor of the Australian Horror & Fantasy Magazine and founder of Dark Press Publications.

Books by B. Michael Radburn 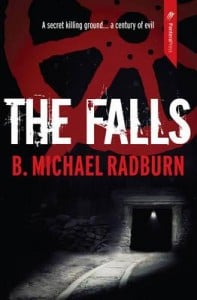 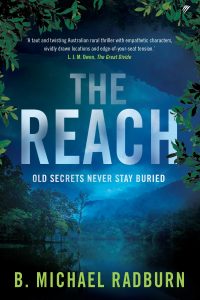