The Fossil Hunter revolves around an exhibit an Australian woman discovers at London’s Natural History Museum. Penelope Jane Martindale served as an ambulance driver during World War I and is awaiting repatriation to Australia. Her trip to the museum is something of a pilgrimage – she’d last visited with her brothers before they enlisted. When she is shown an Australian fossil dating back to the nineteenth century, she recognises the place name – Bow Wow Gorge, the very spot her brothers had fossicked as young boys. In a fit of whimsy, she decides there might be something of significance in their dusty old collection of fossils at home in Australia – the perfect way to commemorate their lives.

Her quest leads her back to the nineteenth century, to a world of scientific discovery and dark secrets!

What inspired this book?

The inspiration for the book stems from a childhood visit to the seaside town of Lyme Regis when I was introduced the story of Victorian palaeontologist and fossil collector Mary Anning and her ‘sea-dragons’, as well as this tongue twister:

It was originally written as a song in 1908, with words by Terry Sullivan and music by Harry Gifford, and widely believed to have been inspired by Mary Anning’s life.  Whether it is true or not I don’t know but it’s a great story! Not only that, Jane Austen visited Lyme Regis on two known occasions, in 1803 and 1804, and it seems she grew to love the place, as I did. In the novel Persuasion she says A very strange stranger it must be, who does not see charms in the immediate environs of Lyme, to make him wish to know it better.

Mary Anning came from a working-class family and she and her father would search the beach for ‘curiosities’, which they sold to visitors to bolster the family’s income. Jane Austen mentions Mary’s father, a cabinetmaker, in a letter written in 1804… she took a ‘lid’ to him to have valued! He deemed it worth five shillings.

When Mary’s father died, she and her brother continued to support the family by fossil hunting and in 1811, when Mary was 12, they uncovered a seventeen-foot skeleton, at first thought to be a sea dragon. She went on to make many more discoveries but it wasn’t until after her death that her contribution to science was recognised.

Armed with my inspiration I set to planning the story.

Although the inspiration came from England I wanted the bulk of my story to be set in Australia. Not only Australia but the Hunter Valley, the old county of Northumberland bordered by the Hawkesbury, Hunter and Macdonald Rivers. The only drawback was, as far as I knew, there were no fossil sites in the area. After some serendipitous research I stumbled upon Bow Wow Gorge, but it is on private property, currently listed on the Register of the National Estate and not accessible to the general public. I was fortunate enough to gain an invitation to visit and learn about the significant fossil beds.

Once I’d visited Bow Wow I knew where I wanted my story set and I was able to begin the remainder of my research. The next step involved a lot less travelling – in fact, a short four-kilometre stroll from my home to the Doctor’s House, the millpond and cemetery in Wollombi, in the Hunter Valley. With the setting for my story settled it was time to embark on the remainder of my research.

Time spent on the internet trying to avoid fascinating rabbit holes – ambulance drivers in World War I, repatriation ships, the 1919 pandemic in the Hunter, and the ‘dragon seekers’ like Mary Anning, who discovered the first entire ichthyosaur and plesiosaur. An endless list. Some people question my sanity but I love the research that goes into my books. I have become totally fascinated by nineteenth-century scientific discoveries.

Erratic! I like to say I write five days a week, but I rarely stick to a regular pattern. My day begins after a leisurely breakfast, coffee, and some musing. Some days I will write or plot and plan, and on others I will take a walk (or a drive), seeking inspiration from the area or to indulge in a little eyes-on research – one of the benefits of setting my stories in the area I live. It also very much depends on the time of the year. The Fossil Hunter has just released so there are library talks and book club visits and, lately, Zoom interviews. I love the opportunity to meet readers face-to-face so I’m thrilled that lockdowns have come to an end.

I have almost finished my 2022 book The Butterfly Collector (working title) and I’m chasing up loose ends before I send it to my publisher. At the same time a bright, new, shiny idea has landed for my 2023 book and I can’t help but follow the first tentative threads of research—no words yet and only one character has a name. We shall see where it leads.

Buy a copy of The Fossil Hunter here. An Exquisite Journey of Discovery: Read an Extract from The Fossil Hunter by Tea Cooper A Breathtaking Australian Historical: Read Our Review of The Fossil Hunter by Tea Cooper 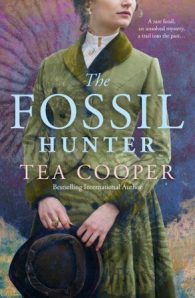 The Hunter Valley 1847The last thing Mellie Vale remembers before the fever takes her is running through the bush as a monster chases her - but no one believes her story. In a bid to curb Mellie's overactive imagination, her benefactors send her to visit a family friend, Anthea Winstanley. Anthea is an amateur palaeontologist with a dream. She is convinced she will one day find proof the great sea dragons - the ichthyosaur and the plesiosaur - swam in the vast inland sea that millions of years ago covered her property at Bow Wow Gorge. Soon, Mellie shares that dream for she loves fossil hunting too...1919When Penelope Jane Martindale arrives home from the battlefields of World War I with the intention of making her peace with her father and commemorating the death of her two younger brothers in the trenches, her reception is not as she had hoped. Looking for distraction, she finds a connection between a fossil at London's Natural History museum and her brothers which leads her to Bow Wow Gorge. But the gorge has a sinister reputation - 70 years ago people disappeared. So when PJ uncovers some unexpected remains, it seems as if the past is reaching into the present and she becomes determined to discover what really happened all that time ago...

Tea Cooper is an established Australian author of historical fiction. In a past life she was a teacher, a journalist, and a farmer. These days she haunts museums and indulges her passion for storytelling. She is the winner of two Daphne du Maurier Awards and the bestselling author of several novels, including The Horse Thief, The Cedar Cutter, The Currency Lass, and The Naturalist’s Daughter. 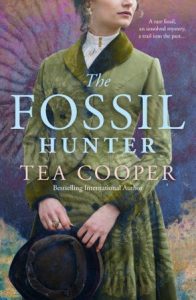