The Power of Sisterhood: Try a Sample Chapter of Grace Under Pressure by Tori Haschka Grace Harkness was steeling herself for another stretch of #solosuppers.

At the bottom of her whitewashed stairs lay the flotsam of parenthood: folded footsie pyjamas, sippy cups, desiccated comfort bunnies, orphaned shoes and snack boxes with cut grapes and nut-free bliss balls. Next to them stood a stout black carry-on suitcase.

This would be Greg’s sixth trip in as many weeks. Her husband’s boarding passes listed Singapore, Bangkok, Seoul, Jakarta, Manila and now somewhere else entirely. It was hard to keep up. Thank god for ‘Find my friends’ on Grace’s phone.

Grace tried to swallow the sudsy backwash of a Rennie. She’d taken it in the vain hope that the antacid would quell the upheaval she felt. Somewhere in the kitchen, there was a cup of tepid Earl Grey tea. Making tea was an act of optimism. Perhaps today she would get to drink it hot, she mused as she pulled out the sodden teabag and traipsed it over to the bin.

This wasn’t what she thought motherhood would taste like.

Grace spied a glimpse of her face in the hall mirror as she caught Greg at their jaunty yellow front door. Her angled cheeks were Roquefort green and her upper lip was beaded with sweat. She reached for his starched French cuff.

Her spouse of ten years recoiled. ‘Grace, you look terrible. Do you guys have gastro again? Because I’ve got two presentations tomorrow, so, can you maybe keep your distance …’

Greg kicked aside a piece of Lego with a practised sweep. His mind had already checked into the pinstriped civility of the airport lounge, with its calming click of keyboards and the gentle clink of cutlery slicing through poached eggs and sourdough toast.

They needed to have a conversation… A Modern Take on Motherhood: Read our Review of Grace Under Pressure by Tori Haschka 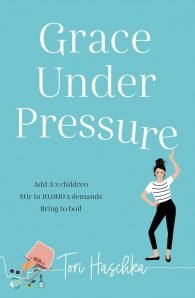 A deliciously hilarious, honest and heartfelt portrayal of modern-day motherhood and the saving grace of female friendship. Grace Harkness looks like she has it all – two beautiful children, four cookbooks under her belt and an idyllic beachside home #blessed. But add another baby on the way (oops), a spouse that is nowhere to be seen and a relentless list of things she ‘should’ be doing, and Grace is starting to unravel. When the madness of modern-day motherhood finally pushes her to the brink, Grace and her friends decide to ditch the men in their lives, move in together and create a ‘mummune’ – sharing the load of chores, school pick-ups/drop-offs and endless Life Admin. The new set-up seems like a dream, but is life in this utopian village all it’s cracked up to be? 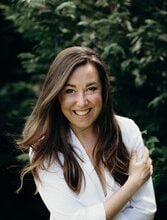 Tori Haschka is a Sydney based author, food writer and mum of two. Her articles have featured in Grazia, The Times, the Guardian, Mammamia and the Sydney Morning Herald and her blog eatori.com was ranked by Saveur as one of the five best food and travel blogs in the world. Grace Under Pressure is her first novel. 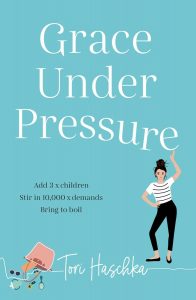