Nina won the trophy last year for the school and while the girls were once good friends things have been strained between them lately. It would be a real achievement if Gemma could bring the trophy home this year.

When Nina gets butterflies and Gemma is stuck with May flies, she is more than a little discouraged – Gemma doesn’t even know where to start looking when she ventures out into the school grounds in search of a boring May fly.

With a heavy heart she takes her bug catcher into the playground, but what she finds there moments later is nothing short of miraculous – initially Gemma thinks it’s a feather but her catch soon transforms into a fairy called Janomi who is desperate for help.

Gemma goes on to record Janomi’s story of an entire colony of fairies that live in the grounds of Nullaboo Primary and discovers that their leader Papa Faffa has been captured and held hostage by their enemies, the silver spiders.

Of course, Gemma immediately gets to work trying to free Papa but when things go awry and the footage of Janomi ends up all over the internet, there is a lot at stake.

Can Gemma and her friends and family manage to save the fairies from the Department of Unexpected Discoveries DUD and the two bumbling agents who are leading the investigation? Has Papa Faffa survived and what will the fairies do now that the secret of their existence has come to light?

This fast-paced story is about the magic of fairies but more importantly it’s a story about community, working together to do the right thing and preserve living creatures and the environment. It’s also about friendship and rising above rivalries when others need help.

Primary school readers will thoroughly enjoy this new book by Australian author Fleur Ferris, her first for young readers, and hopefully there will be more stories of Gemma, Janomi and the residents of Nullaboo to come. 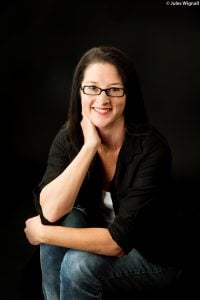 Fleur Ferris spent the first seventeen years of her life growing up on a farm in Patchewollock, northwest Victoria. She then moved twenty times in twenty years.

During this time, Fleur sometimes saw the darker side to life while working for a number of years as a police officer and a paramedic.

She now lives a more settled lifestyle in Moama, southern New South Wales, with her husband and three children.

Fleur’s colourful and diverse background has given her a unique insight into today’s society and an endless pool of experiences to draw from. When she isn’t weaving this through her latest story, reading or spending time with her family, you will find her with friends, talking about art, books and travel. 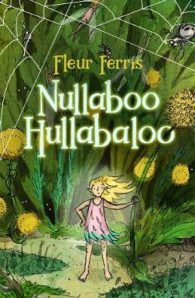 In faraway Nullaboo, Gemma Hart's day isn't going well. Her family might be evicted from their farm, and her science competition topic is march flies. How can she possibly win against perfect Nina, who gets to study butterflies?But wait, that's not a feather in Gemma’s special bug catcher . . . it's a fairy!Janomi the fairy isn’t supposed to talk to humans, but desperately needs help. Her grandfather has been captured by the silver spiders. Gemma agrees to help Janomi, and to keep the fairies' existence a secret. But her bug catcher has recorded their conversation - and Nina finds it.With a media frenzy taking over Nullaboo, a secret government agency barges in to take control, and suddenly the fairy colony is under an even bigger threat. Gemma and her kooky family, school and resourceful neighbours must take matters into their own hands in an against-all-odds bid to save the last fairy colony on Earth.