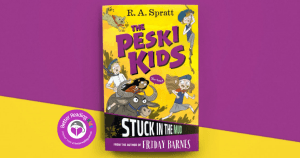 The Peski Kids #3 Stuck in the Mud is the hilarious third instalment in the series by R. A Spratt. If you’re not familiar with it then take a look at our reviews for #1 The Mystery of the Squashed Cockroach here and #2 Bear in the Woods here.

You may also be familiar with the highly successful Friday Barnes and Nanny Piggins series – best-selling and voted by you into our Top 50 Kids’ Books for 2018. Need I say more…

If you have already dipped into the series, you’ll know that it follows the lives of three siblings April, Fin and Joe who have been banished to the Australian country town of Currawong to live the quiet life with their father.

Unfortunately, their mother, Dr Banfield turned out to be a spy and has been captured by the evil international spy organisation Kolektiv and is currently being interrogated in a former Soviet prison

Currawong is a very eccentric little town that holds events such as cockroach races, has bears (not koala’s) in the bushland nearby and apparently hosts an annual festival that celebrates mud – ‘The Mud Run Festival’.

Believe it or not the Mud Run Festival is a big deal with corporate sponsorship, an outside events company running the show and an ex-Olympian ambassador maybe this festival won’t end in disaster.

That is if they can get past a few small problems such as non-existent prize money, a lot of disgruntled females (April is of course leading the pack!), Fin’s big plans and his unfettered access to a bright yellow digger and an interim Mayor that is also the school guidance counsellor.

Meanwhile things are also a bit rocky on the home front when their father proposes to the Swedish au pair who lives next door.

Will the Mud Run Festival be a success this year or will it all end in disaster? Will April manage to get herself expelled? And what about all that mud?

The pressure is on in this surprising, irreverent, quirky and muddy book. Spies, criminal masterminds, lots of laughs and mud – what more can an 8+ reader ask for?

Purchase a copy of The Peski Kids: Stick in the Mud