Every summer, sleepy Tenney’s Harbour has an influx of wealthy tourists that come for the holidays. Pearl Haskins and her father are part of the workforce that makes it all possible – caretakers, wait staff and cleaners.

Locals are dubbed the ‘Townies’ by the ‘Summer Families’ and tension between the two runs high but for Pearl and her father there is a much greater tragedy lurking beneath the surface. Last summer the Garrison family compound was engulfed in fire, tragically leaving only one survivor, Tristan Garrison, the eldest son. Pearl’s father was working as the caretaker that night.

When the police rule that the Garrison fire was arson, making it a multiple homicide, many of the wealthy families blame Pearl’s father for not stopping the murderer’s entry to the house. The weight of this has broken him and he spends more and more time drinking.

This summer Pearl is working at Tenney’s Harbour Country Club, an imposing three-story New England style building that exudes wealth and privilege. The place where the rich have their balls, charity events and golf tournaments.

Tristan and his group of friends frequent the club and Pearl finds herself drawn to him. When the opportunity to spend time with them arises Pearl realises that this could be the perfect opportunity to gather information that may clear her father’s name.

Pearl is confronted by a world where kids drive luxury cars and have their own speed boats and yachts. Equally repelled and envious of their lives, she begins her detective work and quickly discovers that once you scratch the surface, it’s easy to see that all that wealth doesn’t bring happiness.

However, the ‘locals’ don’t take kindly to people who mix with the wealthy families and Reece, Pearl’s best friend, is furious that she would put herself at the mercy of people who will treat her as disposable and substandard.

When Tristan starts paying special attention to Pearl she is attracted to him, but she quickly starts to wonder if he is more than she can handle.

Gillian French’s first book was very well received and her second won’t disappoint. Perfect for the 13+ reader this fast-paced mystery could easily be read in one sitting. The suspense builds as we follow Pearl on her high stakes mission to uncover the truth about what really happened on the night of the fire.

Purchase a copy of The Lies They Tell 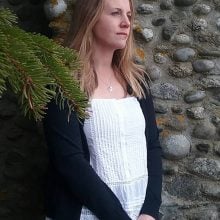 The Lies They Tell