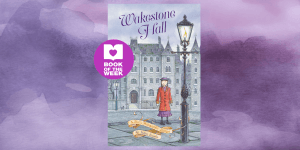 Fans of Stella Montgomery will be very pleased that Wakestone Hall has been released this month. Read about how author Judith Rossell started her writing and illustrating career and the books that inspired her as a child.

When I was at school, I loved to draw. I drew in the margins of my maths homework, or made funny pictures of the teachers and passed them around the classroom. I liked writing too, but in a different way. Writing was schoolwork, to be handed in and marked. Drawing was always more subversive and more fun.

I did well in science and maths, reasonably well in English, and quite badly in art, and I went on to study Textile Technology at university. Then I worked as a scientist at CSIRO for several years. But I still drew for fun, and I started to get illustration jobs here and there. Comic strips, greetings cards, and real-estate ads. A highlight was designing a label for Darrell Lea. I got to visit the factory in Sydney and I can remember smelling the liquorice from half a suburb away as I trudged along the road from the station. I felt as if I was visiting Willy Wonka.

Eventually, I stopped working, and began illustrating full time. At first, I illustrated educational books for schools, (about rugby, or gardening, or how to play the saxophone). Then school readers, chapter books and picture books. It still seems a bit miraculous that I get paid for something that I would do for fun. Illustrating children’s books is the career I would have chosen for myself when I was a kid, if I’d known it was a possibility. So I feel very lucky.

But what happens when an illustrator starts to have their own ideas? That’s often when illustrators become writers. The first books I wrote were maze books (these are very easy to write, there are so few words and not much of a story). Then I did a TAFE course, with the fabulous Hazel Edwards, and learned a bit more about writing, and I wrote some picture books and short junior novels.

I wrote Withering-by-Sea, the first Stella Montgomery Intrigue, because I am fascinated by Victoriana. I am attracted to the melodrama of Conan Doyle and Wilkie Collins and Rudyard Kipling, stories of orphans and missing diamonds and dark deeds. I began by drawing some pictures, and the image of a girl reading a book, lying hidden behind the ferns of a grand conservatory, gave me the idea for the first scene in my story. Then I asked myself, what happens next?

I’m not a good planner, and so writing, for me, is always a bit agonising, because without knowing where the story is going, there’s always the fear that I will not actually make it to the end. But I keep going, because I believe in the characters, and I want to discover what happens to them. The quote I like best about writing is from the American novelist E. L. Doctorow: ‘Writing is like driving at night in the fog. You can only see as far as your headlights, but you can make the whole trip that way.’

What I read when I was a kid.

When I was a kid, I loved reading. When I was very young, we didn’t have a TV (which was dreadful!), but I have very clear memories of visiting the local library and coming home with a stack of books. And we had a generous aunt in England who used to send us books for our birthdays and Christmas, which was exciting. Here are some of the books that I loved, and read again and again.

The Wolves of Willoughby Chase by Joan Aiken

The Lion, the Witch and the Wardrobe by C.S. Lewis

Charlie and the Chocolate Factory by Roald Dahl

Swallows and Amazons by Arthur Ransome

Five on a Treasure Island by Enid Blyton Judith Rossell is the multi-award-winning, Australian author-illustrator of the bestselling Stella Montgomery series (Withering-by-Sea, Wormwood Mire, A Garden of Lilies and Wakestone Hall). Before beginning her career in children’s books, Judith worked as a government scientist (not a mad scientist, a normal kind of scientist) and also for a cotton-spinning company (that made threads for T-shirts and denim jeans and mops and teabag strings). Judith has written thirteen books and illustrated more than eighty, and her work has been published in the US, UK and has been translated into more than twenty languages. Judith lives in Melbourne, Australia with a cat the size of a walrus.