Mr Bambuckle Returns: Read an extract from Mr Bambuckle’s Remarkables: On the Lookout by Tim Harris Before we start telling you all about the latest instalment in the Mr Bambuckle’s Remarkables series, we feel the need to disclose that Better Reading Kids are huge fans of author Tim Harris.

Not only does he write hilarious books that tempt the most reluctant of readers, he has also very generously contributed to our page over the years with his Ode to Books and Dads on Father’s Day and this piece on Five Reasons Primary School Teachers Should Read Aloud in the Classroom.We know you love him too, because you’ve told us!

This is the fourth book in a series that has been described as ‘enthralling’, ‘laugh-out-loud and Rip-Roaringly Awesome.’ Mr Bambuckle, the teacher we all wish we’d had, returns, along with a host of familiar characters and a few new ones.

Drama ensues from the very first page. Mr Bambuckle and Miss Frost have taken the students of 12B on school camp. If that doesn’t set off alarm bells, then you’ve clearly never been on a school camp. 12B have been enjoying all the wonders of nature but now the fun has come to an abrupt end, with Miss Frost revealing that Vex Vron has run away.

Will Mr Bambuckle lose his job (Miss Frost has been eagerly awaiting the moment that the wildly popular teacher will slip up), but most importantly will they find Vex Vron before he comes to any harm? Maybe if they all work together they can find Vex? But is that possible?

Read our full review | Purchase a copy of Mr Bambuckle’s Remarkables: On the Lookout by Tim Harris
Tim Harris is one of the most exciting children’s authors in Australia. His first series of books, Exploding Endings, will have primary-aged readers both captivated and laughing out loud. The first book in the series, Painted Dogs & Doom Cakes, was awarded Honour Book at the 2017 KOALAs. His second series, Mr Bambuckle’s Remarkables, contains his trademark quirkiness, mixed with a touch of poignancy.

A former primary school teacher of 15 years, Tim’s presentations and workshops are dynamic and entertaining. He is a sought-after presenter, having worked in over a hundred schools in 2016 and 2017, alone. 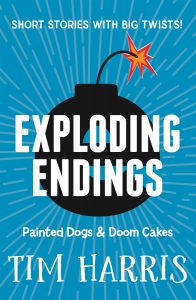