An important contribution to Australian history.

As much as I enjoy immersing myself in the latest fiction to hit the shelves, it’s a nice change to read something a little different. The name tells you what you need to know about this biography – Major Thomas: The bush lawyer who defended Breaker Morant and took on the British Empire. Author Greg Growden has chosen a surprisingly fascinating subject – I really was hooked. 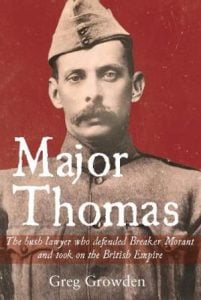 The book opens with Growden referencing a number of historians who have written about Thomas, and how he feels the ‘real, unexpurgated story of Major James Francis Thomas, with its many complexities, blemishes, and unexpected twists and turns’ is yet to be properly told.

While most people have heard of Breaker Morant, very few have heard of the man who became inextricably tied to him. Opinion is still sharply divided on whether Breaker Morant and his Australian co-defendants were criminals who got what they deserved, or scapegoats used by the British Empire. But there has been little focus on the bush lawyer drafted in at the last minute to defend them. Up until now he has been depicted as either a hero or an incompetent fool. But in this book, Greg Growden attempts to unravel the truth about the lawyer and soldier who returned from South Africa a broken man.

Born in Saint Mary’s, he moved to Tenterfield in his late twenties where he became a pillar of his community. He was a published poet, newspaper proprietor, lawyer and decorated soldier. He swiftly moved through the military ranks, farewelling Tenterfield and taking troops to South Africa and the Boer War. Whilst there he received a telegram asking him to defend Breaker Morant. It was a telegram that defined his life.

Thomas has been heavily criticized for how he conducted the defence. Morant and co. were of course found guilty and shot – Thomas witnessed the executions. Afterwards, the former ‘King of Tenterfield’ endured a stunning fall from grace, slipping into bankruptcy and imprisonment. Thomas ended his days as an eccentric recluse, his life ruined by the ignominy and frustration of finding himself on the wrong side of history. For more than a century he has been a footnote in diverging historical arguments.

Author, Greg Growden was a senior sportswriter for The Sydney Morning Herald and Sun Herald, and has written 15 books. His vast experience as a writer shows here in polished, easy prose. Historical biographies are often weighed down by language and research, but Major Thomas is an easy read. Clearly well researched, Growden delivers a fascinating and heartbreaking tale. He believes a proper hearing for Major Thomas is long overdue. Greg Growden has done Thomas justice and has provided one. Major Thomas is an excellent tribute to a fascinating Australian figure.

But a copy of Major Thomas: The Bush Lawyer Who Defended Breaker Morant and Took on the British Empirehere. 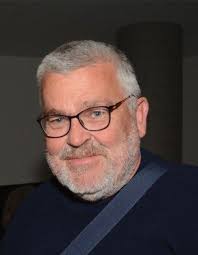 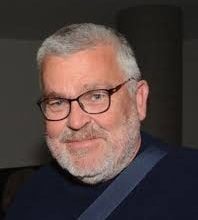