Paul Byrnes joined The Sydney Morning Herald in 1976, reporting from various corners of the world for a decade, before 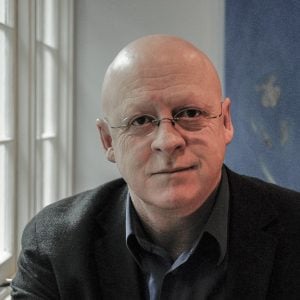 specialising as a feature writer and film critic. He was director of the Sydney Film Festival for ten years, until 1998. In 2007, he won the Pascall Prize, Australia’s highest award for critical writing in the arts. This book is the result of a lifelong interest in the First World War. He lives in Australia and France.

The idea started in Belgium in the summer of 2017, with a gravestone and a pint of Belgian beer. I had been researching in the battlefields, when I noticed a gravestone that mentioned an under-age soldier. Back at the hotel in Ypres, I sat in the bar and started to look on the internet for more information. That led to a list on the Australian War Memorial website, with short biographies of 150 under-age boys. Their stories were heartbreaking and fascinating. If I could find photographs, I knew this would make a powerful book.

I have been reading about the Great War for most of my adult life. I find it both appalling and compelling. There are many superb histories, personal accounts, scholarly overviews. I didn’t want to write another one. I wanted to tell personal stories that would keep the reader close to the soldiers themselves – literally looking over their shoulders. This is not the way history or biography is usually written, so the book is a hybrid – a personal anti-war book set in the midst of a war. I realised that I could structure the stories on a time line, to take a reader through the whole war, from declaration of hostilities in August 1914, to Egypt and Gallipoli, the tragedy of the Western Front, and finally the aftermath in 1919.

Boy soldiers were there for every part of it, and their presence raised a lot of ethical and historical questions. Who let them go and why? Did their parents not love them? Why did the newspapers continually write stories encouraging them to enlist? Where was the political leadership? Were boys treated differently to other soldiers? What happened to their families when so many of them didn’t come back?

No-one knows how many went, because the records are deliberately wrong for the under-aged. They almost all lied to get in; they had to keep lying to stay in, although many of their officers knew their real ages. There were certainly several thousand under-age Anzacs.

One of the hardest parts for me was to avoid hindsight, to try to understand the mindset of an Australian parent in 1914 who thought it was alright for their 14-year-old to enlist. Australians thought very differently about this war, and about the rightness of sending what we would now call children. Boys often left school at ten or 11. By 14, some had been working for four years. They had their own money, some had left home, and they could do most things that older men did, including drinking, fighting and fornicating. They didn’t see themselves as children; in many cases, they were their family’s only bread-winner.   Family ties were in fact one of the greatest reasons for going. The book tells many stories of sons who went after fathers or older brothers – and vice versa.

The youngest I have found was a Kiwi – Leslie Shaw – 13 years and eight months old when he joined up in London. It’s possible that he and his father tried to enlist together, and the father failed the medical – we don’t know. Leslie went anyway and had an eventful war. He survived to become a pilot in Australia and New Guinea, searching always for adventure. Many others were not so lucky.

One of the stories that most moved me was that of Will Richards from Newcastle: he was ‘batman’ – personal servant – to Hugh Connell, his officer in ‘Newcastle’s own’ 35th battalion. Connell had taught Richards before the war. He was trying to keep him safe by making him his batman, but this war rarely showed any mercy. Will Richards died in the arms of his teacher in a dugout in Belgium in February 1917, a few minutes after a shell took off both his legs. He was 17 and five months old.  Another was the story of Leslie Prior, one of the youngest boys to enlist – 14 years and six days old when he turned up at a recruiting office in Brunswick, Melbourne, early in 1916. Leslie spent most of the war in trouble. He didn’t like army discipline. He distinguished himself by becoming one of the youngest to catch a venereal disease. He was already in treatment when his ship docked in Egypt on the way over. Leslie Prior was killed at Second Bullecourt in France in May 1917, in a battle he should never have been sent to. The medical officer said he was fit to go, so he went and died.

A few of these fathers and sons are buried in small well-tended cemeteries in northern France, Belgium and Turkey, but most have no known grave. I remembered that Peter Pan’s lost boys could never grow old – and that gave me a title. I wasn’t then conscious that it echoed Laurence Binyon’s famous lines in his poem, For the Fallen:

They shall grow not old, as we that are left grow old

Age shall not weary them, nor the years condemn.

The poem promised that we would remember them, but that was not quite true. No-one had written much about underage Anzacs. It was as if they had never existed.

Finding the photographs was a revelation. Many had beautiful portraits taken by skilled photographers like Algernon Darge, who set up a studio at Broadmeadows camp outside Melbourne. Other photographs have been lost, if they ever existed. I hope that the book will bring some of these to light – to be used in a later edition, perhaps.

Researching their lives was very rewarding, if demanding. On a few days, I would have to take a break from all the sadness and horror. Other days were full of wonder and joy, when I found something that told me about the courage, the sheer bottle that these boys took to war, and the good humour with which they faced it. Many of them have relatives who helped me to see the stories with more clarity. The lost boys were too young, too wild and romantic for their own good, but they had grit. I wanted people to know that and to remember them, as we said we would. An Extraordinary Book: Read an Extract From The Lost Boys by Paul Byrnes A Touching and Powerful Homage: Read a Review of The Lost Boys by Paul Byrnes 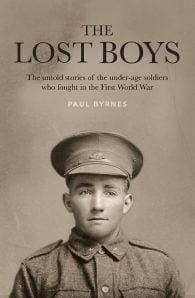 In the First World War of 1914–1918, thousands of boys across Australia and New Zealand lied about their age, forged a parent’s signature and left to fight on the other side of the world. Though some were as young as thirteen, they soon found they could die as well as any man. Like Peter Pan’s lost boys, they have remained forever young. These are their stories.

This extraordinary book captures the incredible and previously untold stories of forty Anzac boys who fought in the First World War, from Gallipoli to the Armistice. Featuring haunting images of the boys taken at training camps and behind the lines, these tales are both heartbreaking and rousing, full of daring, ingenuity, recklessness, random horror and capricious luck.A unique perspective on the First World War, The Lost Boys is military history made deeply personal, a powerful homage to youthful bravery and a poignant reminder of the sacrifice of war. 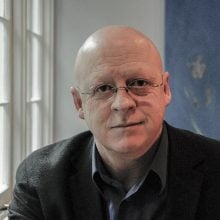 Paul Byrnes joined The Sydney Morning Herald in 1976, reporting from various corners of the world for a decade, before specialising as a feature writer and film critic. He was director of the Sydney Film Festival for ten years, until 1998. In 2007, he won the Pascall Prize, Australia’s highest award for critical writing in the arts. This book is the result of a lifelong interest in the First World War. He lives in Australia and France. 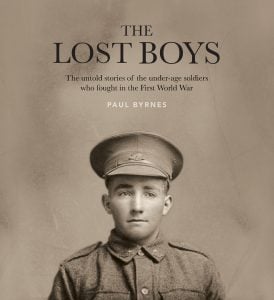 The Lost Boys: The untold stories of the under-age soldiers who fought in the First World War