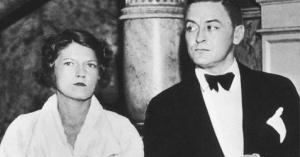 ‘The one thing we can never get enough of is love. And the one thing we never give enough is love.’ Henry Miller (who was famously married five times).

As sure as the sun will rise tomorrow, somewhere in the world, over a cocktail, at a book reading or a launch, a dinner party or literary festival, sparks will be flying, and two writers will fall in love. You can see how it might happen, how attractive (and plausible) the idea that other writers might be the only ones to tolerate the degree of self-obsession and isolation required for penning a book. From the doomed, dazzling Fitzgeralds’ to Joan Didion and John Gregory Dunne, whose long marriage spawned brilliant writing careers, literary couples and their love affairs have long fascinated us.

Here are a few of the most famous literary liaisons:

Both fell madly, deeply in love over cocktails at Melbourne’s August Hotel Australia. You could see how it happened: George was 35 and married, charming and urbane. Charmian, 23, beautiful and talented, new to the heady, sophisticated world of publishing. But their raging affair became a huge scandal at The Argus newspaper office where they both worked. Outrageously, Charmian was sacked. George resigned in protest. After a period spent living in London where they became the darlings of the ex-pat community, mixing with luminaries such as Laurence Olivier and Peter Finch, the couple relocated to the Greek island of Hydra to try living off the proceeds of writing alone. Johnston returned home the conquering hero, winner of the Miles Franklin award for My Brother Jack. Clift returned to Sydney with the children in the mid-sixties. After that, her memoirs, Mermaid Singing, and Peel Me a Lotus along with her novel, Honour’s Mimic, were huge successes. But heavy drinking and other family strains took their toll and the relationship sadly fell apart. Clift tragically committed suicide in July 1969. A sad end to a passionate and brilliant literary partnership.

Didion and Dunne first met in New York in the 1950s. He was a writer for Time magazine, she was a young editor at Vogue. He was larger than life, she was petite and quiet. They forged a strong friendship and fell in love while discussing the manuscript for her debut book. Didion made her name first. Famously, in a New York Times profile their friends told a story about Dunne saying: ‘Ran into Jesus today… he loves Joan’s work.’ They were both driven and ambitious, yet neither was jealous of the other. They shared the work – and the success – writing eight bestsellers between them. ‘We understand each other’s self-absorption,” said Dunne, ‘that’s the only way we can survive.’ He wrote a thinly veiled account of his struggles with infidelity, while she wrote candidly of her marital doubts, migraines and bouts of depression. After Dunne’s death in 2003, Didion wrote about her grieving process. The Year of Magical Thinking, a brilliant, deeply moving memoir quickly became a classic. ‘I did not always think he was right nor did he always think I was right but we were each the person the other trusted,’ wrote Didion.

‘I’ve fallen in love with a whirlwind,’ declared Fitzgerald after his first encounter with Zelda at a country club dance. He was in the army, stationed in Montgomery, Alabama, where Zelda lived. He was of course not the only one courting the beautiful southern belle, but the competition only served to intensify Scott’s desire. They fell in love, intoxicated with one another and life’s endless possibilities. ‘Scott had appealed to something in Zelda which no-one before them had perceived: a romantic sense of self-importance which was kindred to his own,’ wrote Zelda’s biographer Nancy Milford. By the time peace was declared they were inseparable. They were wed in 1920 and became the golden couple of the Jazz Age, famous for their manic partying and wilful extravagance. ‘We tried to manage without a butler but Zelda cut her wrist on a can of baked beans,’ wrote Fitzgerald. They moved to France in 1924 which meant Paris, the Riviera, Cap d’Antibes, Cole Porter, Hemingway, Picasso and Chanel. There was jealousy, fights and a shared wild lifestyle yet Zelda’s presence seemed to fuel Fitzgerald’s writing. He even used extracts from Zelda’s diary in his novels, a habit she came to resent. Like the glamorous, damaged Jay Gatsby and Daisy Buchanan of Fitzgerald’s The Great Gatsby, they seemed doomed. After the couple separated, Fitzgerald, one of the greatest American writers, became an unemployed alcoholic living in Hollywood, while the beautiful Zelda became a long-term inhabitant of psychiatric institutions. Shooting stars who dazzled all too briefly before plunging tragically into darkness.

Both were giants in the world of letters, particularly philosophy, and their highly unconventional partnership spanned decades. They were the intellectual power couple of the 20th century. Beauvoir wrote the seminal The Second Sex, the 1949 novel that laid the foundation for feminism of the 1960s. Sartre is called by some the father of Existentialism. They met at the Sorbonne University and became an item in 1929, but it was never an orthodox relationship. They never married or lived together and famously had an open relationship. Beauvoir and Sartre even told each other about their flings and developed a pattern of sharing lovers. ‘We were two of a kind,’ wrote De Beauvoir, ‘and our relationship would endure as long as we did: but it could not make up entirely for the fleeting riches to be had from encounters with different people.’ The relationship worked for Sartre and de Beauvoir for 50 years.