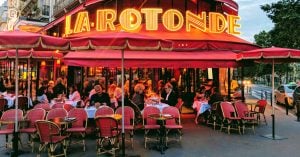 A couple of weeks ago we looked at some of the world’s most legendary literary cafes, where writers gathered and wrote. This week, it’s bars. Writing is a solitary occupation, so throughout history there has been a tradition of writers connecting with the world while they work via their local café or bar. The tradition most likely stems from a time when the coffee houses of Europe were meeting places for artists and intellectuals, where they’d gather, talk, drink coffee or wine, and write.

Hemingway once said, “Write drunk, edit sober.” Here are a few of the world’s most famous literary bars, where writers did just that.

Dorothy Parker, Heywood Broun, George S. Kauffman, Robert Benchley, and founder of The New Yorker magazine, Harold Ross, were all members of a group of journalists and writers called the ‘Algonquin Round Table’ or ‘The Vicious Circle.’ The group gathered together in the 1920s at the historic Algonquin Hotel’s Blue Bar in Midtown Manhattan. They drank, pulled pranks, played poker and charades. In one famous game, they would be given a word and have to come up with a sentence around it. The most infamous example of this was when using the word horticulture, Dorothy Parker said, “You can lead a horticulture but you can’t make her think.”

Kennedy’s Bar and Restaurant in Dublin, Ireland, is steeped in literary tradition. Oscar Wilde earned his first shilling stacking the shelves on Saturday afternoons when the establishment was still a grocery store. Apart from its most famous employee, Samuel Beckett and James Joyce were also known to drink at Kennedy’s. Nowadays it displays its literary history with pride, with a pictorial homage in the bar. While definitely a tourist drawcard, it apparently still boasts clientele from the world of literature and academia.

This Tokyo bar has been serving famous writers such as Yukio Mishima for over 80 years, and there is no one better to share stories about these patrons than Est! bartender Akio Watanabe. Watanabe is himself in his 80s, but as vibrant as the bar he serves. If you’re in Tokyo, drop by for a drink – he’s happy to chat about the literary greats he’s served.

The Eagle and Child, Oxford

The Eagle and Child, also known as The Bird and Baby, is a pub in Oxford, England. It is known for the writers’ group the Inklings that met there for nearly two decades in the thirties and forties. Group members included J.R.R. Tolkien and C.S. Lewis. It was at one of these meetings that C.S. Lewis handed out proofs of The Lion, the Witch and the Wardrobe… and the rest is literary history. 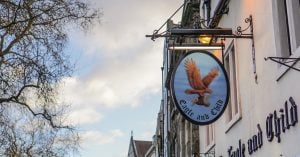 Mentioned in our café piece, Vesuvio Bar and Café was also a place where writers gathered to drink alcohol, not just coffee. It was established in 1948 and became a popular hangout spot for the writers, poets and other artists of the Beat Generation in the 1950s. Writers like Jack Kerouac and Allen Ginsberg would hang at Vesuvio drinking, talking and writing. Other famous patrons include Dylan Thomas, Bob Dylan and Francis Ford Coppola.

Paris is full of cafes where you can drink wine and soak in the city’s literary history. Two of the most famous establishments are La Rotonde and Les Deux Magots.

Have you visited any of these bars? Do you know any other bars that have famous literary patrons?