Creepy Page-Turner: start reading B. A. Paris’ psychological thriller Bring Me Back

The scene is a dark and dingy motorway rest stop in northern France: Finn’s girlfriend Layla goes missing without a trace, as they return from a skiing trip to their beloved little cottage in Devon. Finn, initially a suspect in her disappearance, is released without charge.

Twelve years later, there’s still no sign of Layla and she is presumed dead. At her memorial service, Finn meets Layla’s older sister Ellen. They fall in love and become engaged. Their life is idyllic in many ways – she’s a successful illustrator, he’s a high-flying finance manager; they live in a quaint English village with a beautiful red setter that Finn bought because, with her luscious, long red hair, she reminded him of Layla.

Their idyll is shattered one day when Russian dolls start to mysteriously appear on their doorstep. Ellen and Layla had a childhood squabble over their own Babushka dolls and they’re the only people who know about the significance of them. Adding to the mystery, there have been questionable reports of Layla sightings.

As soon as there’s a hint that Layla could be alive, Finn questions his relationship with her sister, Ellen. She is the more conservative sister and though she and Finn have been happy together, nothing can compare to what Finn had with Layla.

Feeling confused and guilty, Finn attempts to track down the person responsible for the Russian dolls and the strange, demanding emails he starts receiving around the same time. Could it really be Layla? But why now, after all these years? Or is it someone else messing with his head, pretending to be his missing love? And what do they want from him?

Finn is hiding his own dark secret from his past in Ireland, but still, we feel for him as the sinister events leave him sleepless and questioning his sanity. As he desperately tries to uncover the truth behind the strange goings-on, Bring Me Back builds to a frantic and frightening climax.

Since her bestselling novel, Behind Closed Doors, psychological thriller fans have worshipped at the altar of B.A Paris. Her latest, Bring Me Back, is another creepy, taut page-turner. Acutely adept at bringing her readers right to the edge of their seats, and making them desperate to know what happens next, Paris has again delivered more of the tense and clever storytelling for which she’s become known.

The tightly woven story is narrated from both Layla and Finn’s point of view in intimate first person, with only a small cast of supporting characters, infusing the novel with a claustrophobic feel. It’s one of those pacy, immersive reads that keep you guessing.

B A Paris is the internationally bestselling author of Behind Closed Doors and The Breakdown. Having sold over one million copies in the UK alone, she is a New York Times bestseller as well as a number one bestseller on Amazon and iBooks. Her books have sold in 37 territories around the world. Having lived in France for many years, she recently moved back to the UK, and has five daughters.

Purchase a copy of Bring Me Back 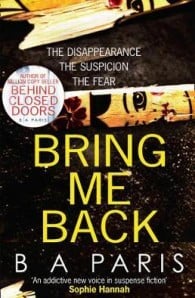 The Disappearance Twelve years ago Finn’s girlfriend disappeared.The Suspicion He told the police the truth about that night. Just not quite the whole truth.The Fear Now Finn has moved on. But his past won’t stay buried… 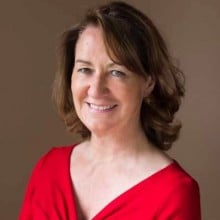 B. A. Paris is from a Franco/Irish background. She was brought up in England and moved to France where she spent some years working as a trader in an international bank before re-training as a teacher and setting up a language school with her husband. They still live in France and have five daughters. She is the author of the bestselling psychological thriller Behind Closed Doors. 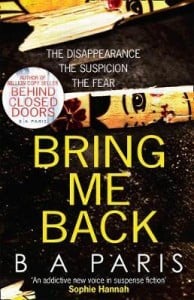