But it’s nonsense! No one kills himself for abstract principles like that. Not even my brother. Principles are a thing to live for, not reasons to die.

The Zero and the One is Ryan Ruby’s debut novel, which has been dubbed a philosophical thriller, and has plenty of twists in the story and style, offering moments of Gothic storytelling, mystery suspense, and the wise contemplations of fine fiction. It is a brilliant story told by a shy intellectual, Owen Whiting, who is recovering from the death of his friend Zach.

Owen’s best friend Zach commits suicide for reasons he conceives are morally dignified, leaving behind a guilt-ridden Owen, best friend and accomplice in the suicide. But how did their suicide pact go so wrong, and why did it happen in the first place? What started up as a moral experiment played out in their lives quickly became a reality, and although Zach frequently theorised about how suicide was ‘a principled act of defiance . . . a defence of the freedom of the will against our servitude to causality’, he never thought Zach would actually go through with it. Or did he?

Zach and Owen met at Oxford University and immediately formed a fast friendship, mostly because Zach’s unwavering charisma pulled Owen away from a life of solitude and scholarly discipline into an underworld he never could’ve discovered on his own.

As students of philosophy, their lives become an increasing set of challenges and moral experiments, as they drift from Oxford to the hidden wonderlands of Berlin, until Zach proposes a transgression like no one: a suicide pact.

But running alongside the narrative of Owen and Zach’s newly kindled friendship is a story in the future. Owen is lonely once again, attending Zach’s funeral in New York and ruminating on how all of this came to be. Zach has committed suicide and although everyone in mourning doesn’t understand why, Owen knows more about it than he’s letting on . . . There is a mystery inside this book that unravels slowly, compellingly.

Ryan Ruby’s book echoes plenty of classic novels: at times it rings of The Bell Jar by Sylvia Plath, The Secret History by Donna Tartt, and even The Catcher in the Rye by J.D. Salinger. It has been dubbed a philosophical thriller and accomplishes this blend of genres by foreshadowing a dark Gothic twist within it. On the surface, The Zero and the One is a story about a young man lost in the big world, but things quickly take a surprising, sinister turn, and the pace of the story accelerates right along with it.

It’s obvious that as a writer, Ryan knows exactly what he’s doing. The double narratives take a staggeringly unexpected turn about halfway through the book and catapults toward an ending that is totally out of sight and fulfilling. It will surprise, haunt, and excite you all at once.

Grab a copy today, or check out Better Reading’s Q&A with Ryan Ruby! 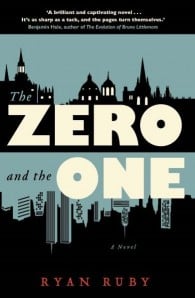 A shy, bookish scholarship student from a working class family, Owen Whiting has high hopes of Oxford, only to find himself adrift and out of place among the university’s aristocrats and posh radicals. But his life takes a dramatic turn when he meets Zachary Foedern, a visiting scholar from New York. Rich, brilliant and charismatic, Zach takes Owen under his wing, introducing him to a world of experiences Owen has only ever read about.From Oxford to the seedy underbelly of Berlin, they practise what Zach preaches, daring each other to transgress the boundaries of convention and morality, until Zach proposes the greatest transgression of all: a suicide pact. But when Zach’s plans go horribly awry, Owen is left to pick up the pieces in New York. Now he must navigate the treacherous boundaries between illusion and reality to preserve a hold on his once bright future. No one – least of all Owen – will foresee where that leads him …About the author Born in Los Angeles, Ryan Ruby was educated at Columbia University, Oxford University and the University of Chicago. He has been a bookseller in Los Angeles, a tour guide in Berlin, a layabout in New Orleans and a lecturer in philosophy at the City University of New York.His fiction, literary criticism and political commentary have appeared in a variety of literary magazines, including Paris Review Daily, n + 1, The Baffler, Conjunctions, Dissent and Lapham’s Quarterly. Ryan Ruby lives in Berlin.

Born in Los Angeles, Ryan Ruby was educated at Columbia University, Oxford University and the University of Chicago. He has been a bookseller in Los Angeles, a tour guide in Berlin, a layabout in New Orleans and a lecturer in philosophy at the City University of New York.His fiction, literary criticism and political commentary have appeared in a variety of literary magazines, including Paris Review Daily, n + 1, The Baffler, Conjunctions, Dissent and Lapham’s Quarterly. Ryan Ruby lives in Berlin. 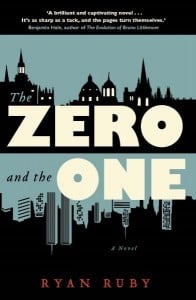 The Zero and the One